I have 2 objects, both have a Box collider 2D.

The first object is on the Level1 Sorting Layer and has a Tile script attached to it.

The second object is on the Level0 Sorting Layer and doesn't have any scripts. 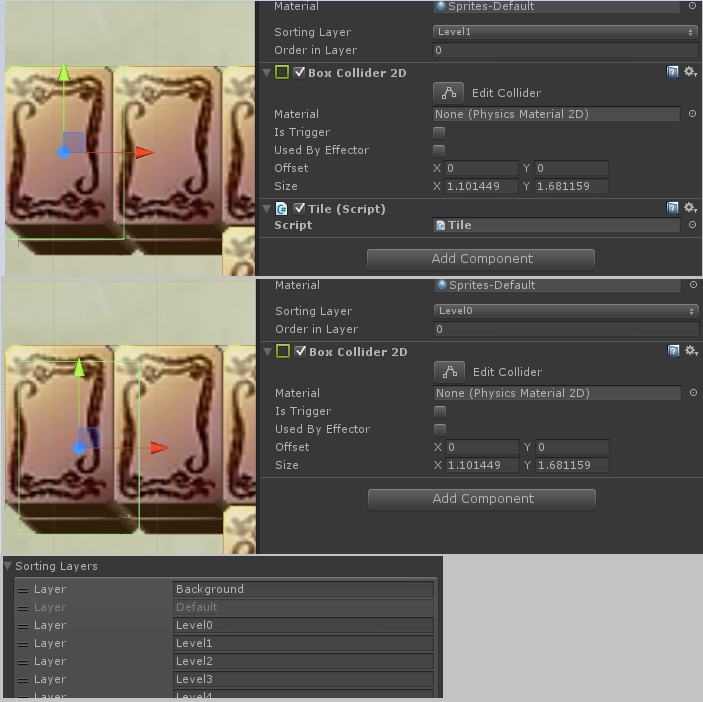 The Tile script code is as follows:

Whenever I click the top tile, nothing prints in the console unless I click on the red area like I show in the image below (red area = [first box collider] minus [the two box colliders intersection area]).

If you have stacked BoxCollider2Ds like that, Unity will only capture the mouse click on the topmost one.

Not the answer you're looking for? Browse other questions tagged c# unity collision-detection or ask your own question.

1
How to make an object move again after being stopped by collision in Unity?
2
Is OnMouseUp()'s behavior intended?
1
Unity Transform.Position not returning expected position
1
BoxCollider2D Not Working
1
How to find the closest point on multiple colliders within a box?
0
Unity Proximity Warning System Trigger issues
0
Why the cube is getting to the other cube instead stopping when both colliders hit?
0
How to trigger OnMouseX events on Kinematic Rigidbody2D object with a different collider than one used for collisions?