So I'm making a copy of noobtuts tutorial on Snake

I've done all their steps and am at the point of extending the game solo, however I have an issue with the basic set-up. My box colliders aren't working at all!

I've a basic gif showing off what I mean:

The only different thing about the box colliders is that for the snake they're 0.7 in size, not 1. But even when put to 1, they don't work properly.

Why isn't it stopping the snake from moving? I've never had to tell an object that when it hits another object to not move through it from what I can remember.

In unity when collision don't work you can fix the problem by following the below steps:

1.Set Collision and Triggers based on game(If game was 2d you should use BoxCollider2D) and check BoxCollider2D trigger Boolean. 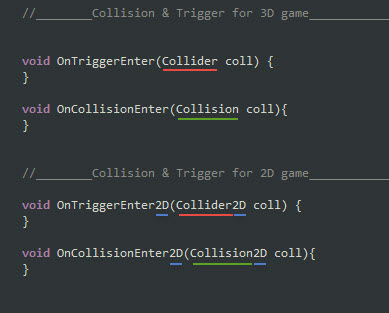 4.If you can not fix your problem perhaps wrong settings go Edit/project Setting/Physics or Physics2D

second way:you can use Trigger and define when snake exit from scope of the game Reset game

But you should not work with translation of a rigidbody. Use velocity instead.

I had the same issue when i was making a breakout game it seems that Kinematic rigidbody collider don't interact with static ones you can check the table here: https://docs.unity3d.com/Manual/CollidersOverview.html.

for me i've overcame the issue by disabling isKinematic and setting the GravityScale to 0. you can either do that or use a script to limit the snake movement by comparing its coordinates with the borders' coordinates.

3
Unity sprite with higher sorting layer not firing its OnMouseDown function
1
Snake game collision problem in Unity
0
Rigidbody2D without pushing eachother on collision
4
Collider / coroutine timer issues
0
I can't find a way to make my projectile gameobject collide with my ofscreen collider
0
Why do my objects with colliders go through each other, and how do I fix it?
2
When setting Rigidbody.isKinematic true collider won't work anymore
0
Unity 2d circle collider not stopping after collision with box collider 2d
1
Problems with gravity and box colliders in Unity 3D