How to find the closest point on multiple colliders within a box?

I need to find the position of the closest point from the bounds of multiple colliders. Right now I'm using OnTriggerStay and collider.ClosestPointOnBounds().

This works great for one collider, but as when I add a new collider, it doesn't update.

I've drawn a quick picture to illustrate what I'm trying to say. The black box is the area I want to check in, the red boxes are the colliders with numbers representing the order they entered the black box. The green star is what the code currently says the closest point is, and the blue star is the expected result. The purple star is the position I'm checking for, the blue star should be the closest point to the purple star. 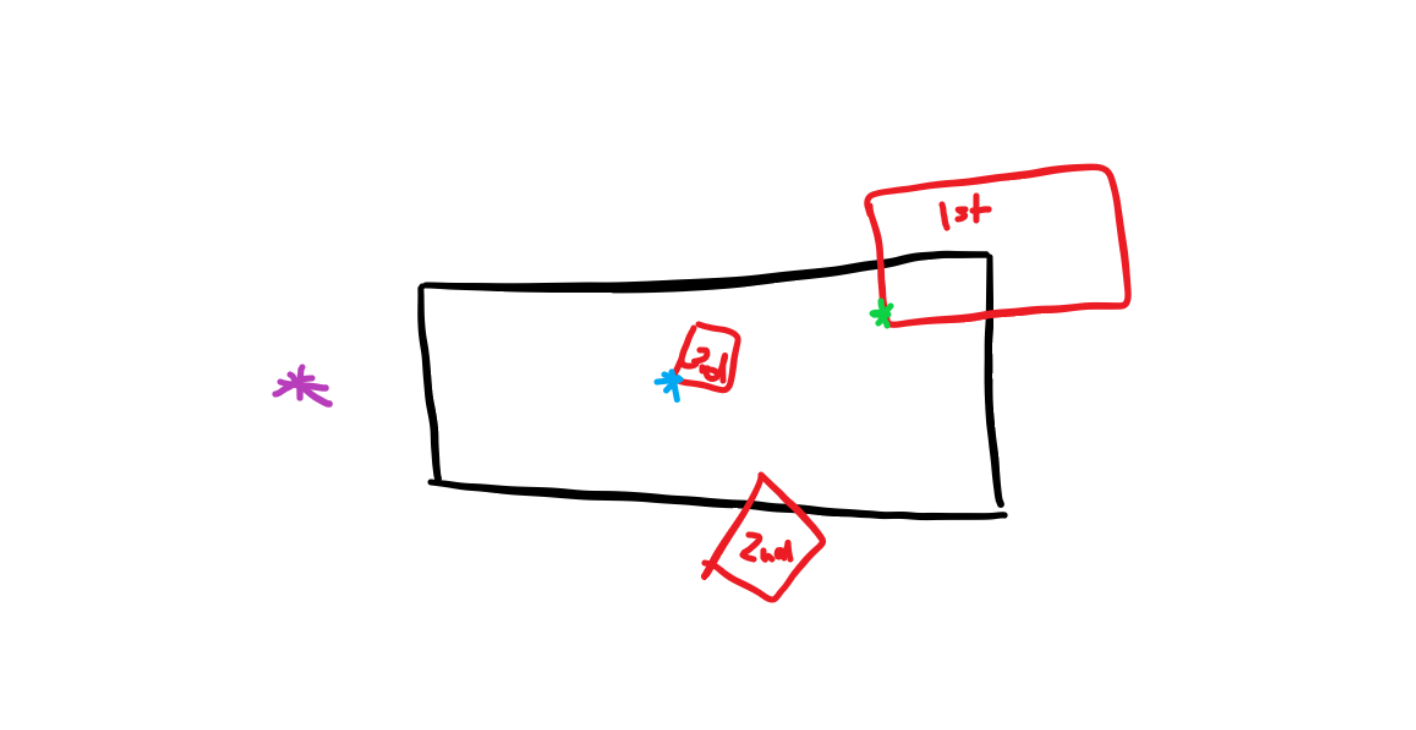 I found this answer to a similar question on answers.unity3d.com. However, I feel like that could be very inefficient because there will be many, probably up to 50 of these box checking scripts running at the same time.

I've also tried using Physics.BoxCast but that gave very wild results. The area it was checking was very different to what I wanted, and also what I was visualizing with gizmos. Also, the whole idea of boxcasts are very very confusing so I would rather something else.

What is the best way to find the closest point on the bounds of multiple colliders within a certain area?

When I needed to do the same, I've used an approximation which worked well. Here is what I do, given two colliders A and B (any form and complexity, but must be convex):

This solution is rather expensive since you do 4 checks, but with simple colliders the performance hit is negligible.

P.S. Don't ask me for the formula proves. This solution was purely intuitive, and I'm not even sure it's geometrically correct. It simply worked for me :)

I ended up using Physics.OverlapBox and sticking with ClosestPointOnBounds. Here is the successful code I used:

Not the answer you're looking for? Browse other questions tagged unity c# collision-detection .

2
Alternatives to raycasts in unity?

1
Application design for specific points on image
5
Getting a pixel of Sprite at the cursor position in Unity
1
How would I check the range against the entirety of an enemy object, and not just it's transform.position?
2
How to create a Spawn Area that can be visualized in the Unity Scene Editor?
4
Collider / coroutine timer issues
0
2D Circle detection algorithm partially working
2
Finding the closest point on a concave mesh
1
How can I convert Physics2D.Raycast to Physics2D.BoxCast to yield the same results?