I'm learning Shader Graph and am trying to experiment with toon shading effects. One thing I'd love to do is make a traditional art styled crosshatching effect either inside shadows or at the edge of shadows. However, I'm lost as to how to do that. I have a sample crosshatch texture I can use as a texture2D but I'm unsure how to use this as an input in shadows and to which nodes to hook it up to. I'm very new to dabbling in shaders so I'd appreciate any tips.

Usually I approach this kind of effect as a post-process image effect:

Using the scriptable render pipeline, you need to define a Renderer Feature that will inject this new pass into the pipe. Based on the example here, we can write something like this:

This will let you select the renderer asset you're using and choose "Add Renderer Feature" to add a new image effect into your pipeline. 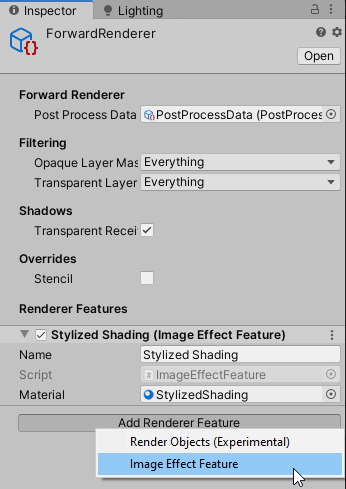 Here we've exposed a Material parameter we can assign to do the work of the image effect. It will get the rendered scene texture passed to it as its _MainTex, and whatever it outputs will be the result passed down the rest of the pipeline.

Now for the graph! For starters, here's the shading texture I'm using, a leftover from a shader workshop a few years back:

We'll start by creating a new unlit shader graph, and configure properties for...

Then we draw the rest of the owl:

Okay, let's break that down step by step. First we want to clamp the image into the 0-1 range (sorry HDR - we're gonna ignore you for simplicity in our first attempt), and dot it with the relative luminance constants to reduce it to greyscale, weighting the brighter green channel much more heavily than the dark blue channel.

You can also divide by this value to recover the scene's chromaticity, with the shading removed. We can use that to preserve the colour in our image later, so that we don't double-dip on shading by layering our hatching on top of an already-shaded image. 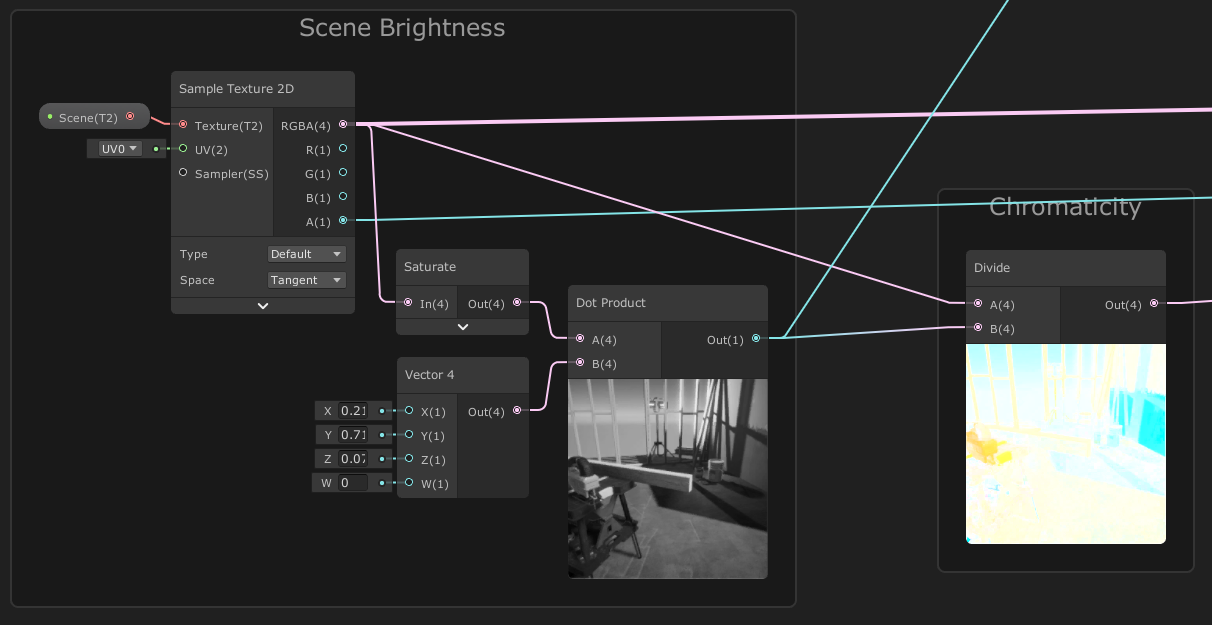 Next we need to compute the UVs to sample inside a single hatching swatch.

Because we're mapping this in screen space, it can start to look like something painted on the camera lens, since it doesn't move as content in the scene does. Adding a pseudo-random jitter into the UVs helps mask that, making it look more like the image is being redrawn at a framerate of your choosing. But you can also delete the top box if you want your hatching to stay fixed on the screen. 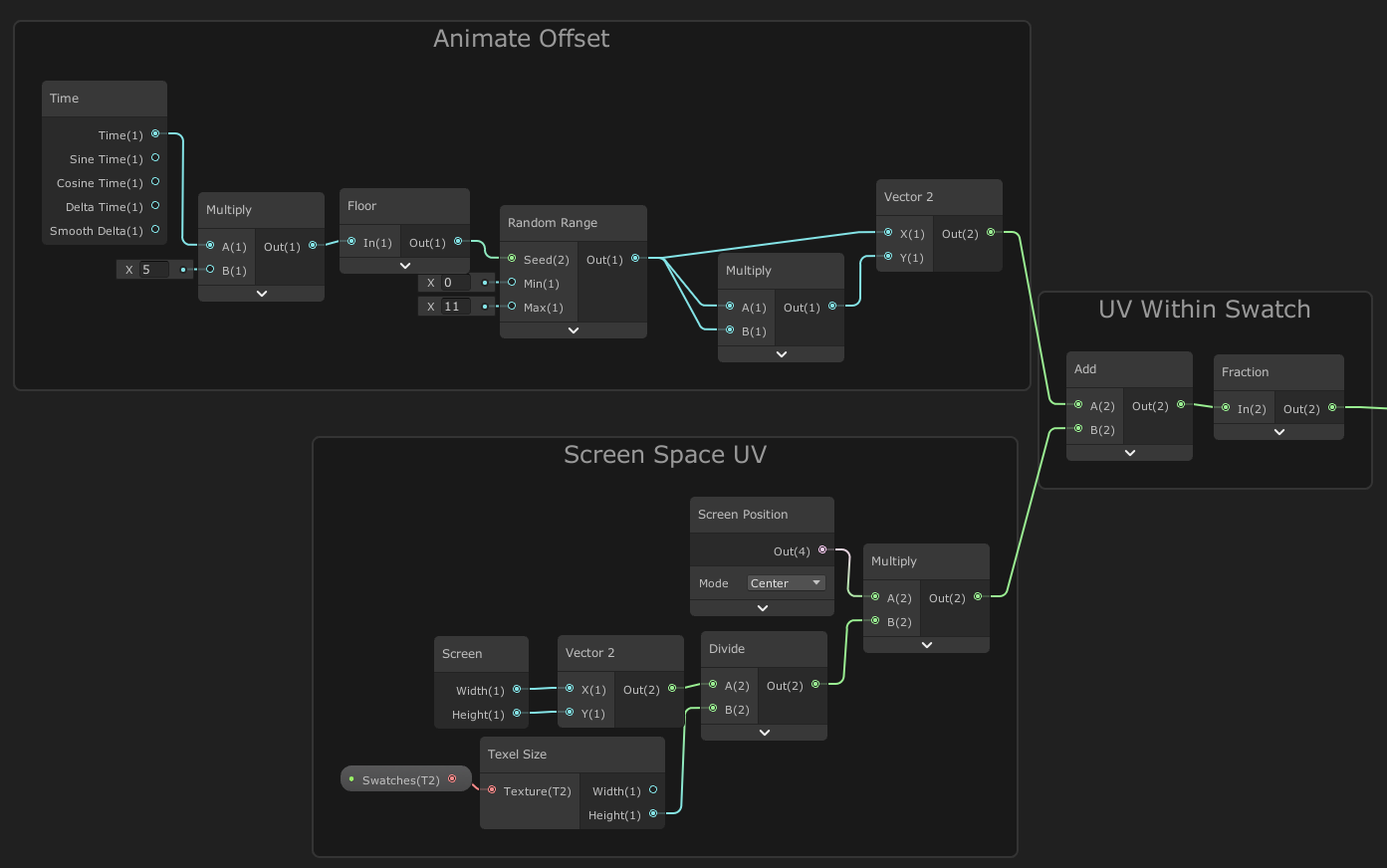 The "Fraction" node at the end handles wrapping the UVs into the 0-1 range for us. Since our swatch texture has bands of different shading side-by-side, we need to do that wrapping ourselves to keep from peeking into an adjacent swatch.

Here's where the magic happens: 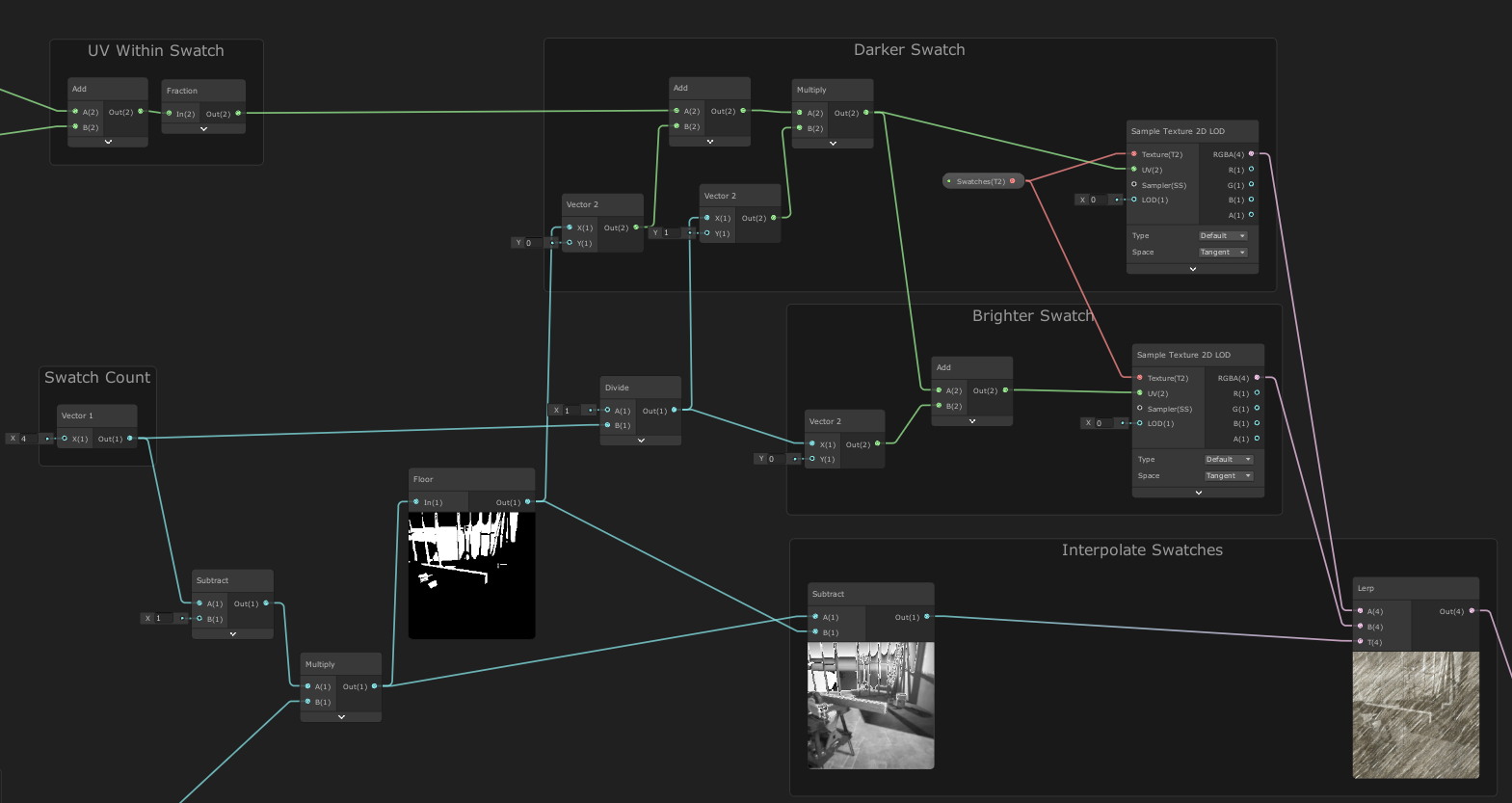 We take our computed scene luminance in from the bottom-left, and multiply it by our number of shading ranges we have (swatch count - 1). Taking the floor of this gives us the index of the swatch at the dark end of this range.

We add this to our screenspace UV, then divide the resulting horizontal value by our swatch count to get it into the 0-1 range of our texture lookups. Then we sample the dark swatch.

Adding 1 / swatch count horizontally gets us the corresponding point in the next brighter swatch, and we sample that too.

Note I'm using the Texture 2D LOD node to say "we don't need mipmapping" - otherwise the jumps where we wrap-around inside a swatch look to the GPU like a texture being sampled from a long distance away, and it tries to mipmap them down to reduce aliasing, making line artifacts in our image.

Lastly, we subtract our floored luminance from the multiplied version, to get our fraction of the way between the dark and bright ends of the range. We use this as an interpolation weight to blend our two swatch samples. 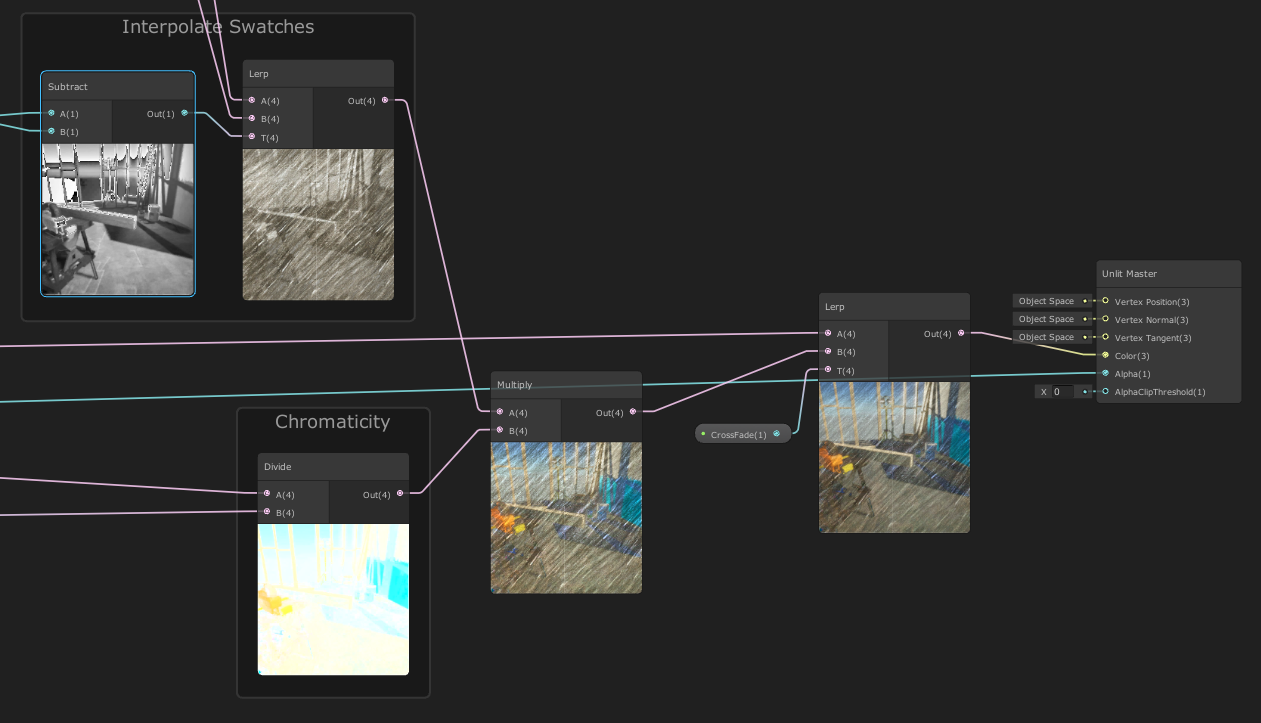 We can multiply our sampled hatching with the chromaticity we calculated earlier to re-introduce the scene's colour, but with our new stylized shading.

And of course, lerp between the original input texture and our stylized result, using our cross-fade variable, so we can control the intensity of stylization.

Here's what this looks like in my example, using the default sample scene: 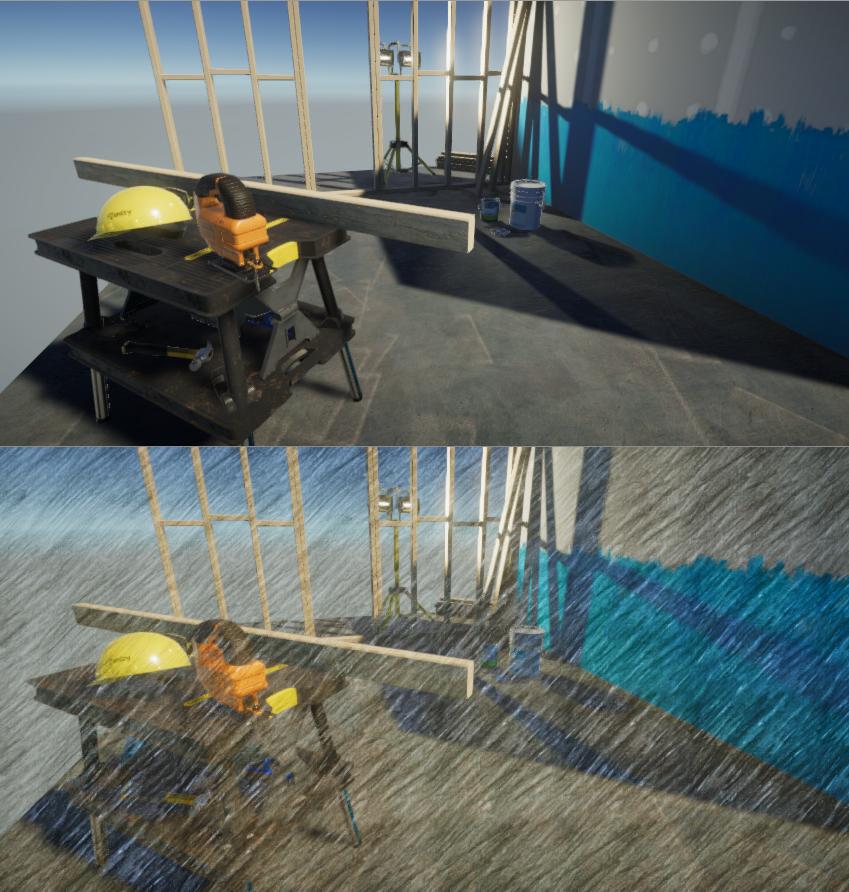 Not the answer you're looking for? Browse other questions tagged shaders unity-shader-graph or ask your own question.

0
How to make a cell shader like BOTW in Unity?