I want to highlight a certain item in an inventory. It is a 3D scene although it looks a bit 2D. That is confirmed.

To do do that I have create a cube with a very small z scale (so that it looks like a plane... yes, I could have used a plane right away, I notice it now that I write it).

I have put a transparent material onto my cube. This material constantly changes its alpha value so that it looks like it's glowing.

I'm doing this because I want to re-do this inventory:

In the inventory system that I want to redo (see screenshot), the cube however it rendered after the weapon, so that it looks as if the cube was over the weapon (while in fact it is below the weapon. One can see that by the fact how perfectly the glowing cube aligns with the grid, and the weapon is over the grid).

I would therefore like to ask if I can make it so that a certain material / mesh is rendered after a certain other material.

I have only seen Sorting Layers for 2D, but nothing for 3D meshes.

Thank you very much!

Edit: Somebody suggested that I should place the glowing cube over the weapon. I had tried that, but it doesn't look good as the cube isn't "aligned" with the grid anymore, but hovers / floats over it instead. Here is a screenshot: 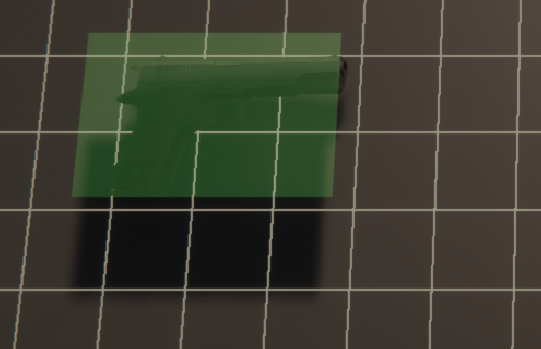 The Unity bug report team pointed me to the solution:

The important thing is: It works only for "Surface Type: Transparent". If you're dealing with 2 materials which have surface type "Transparent", then you can set their render order using the "Sorting Priority".

So the way to solve the mentioned problem is to set the surface type "Transparent" for all meshes involved.

Not the answer you're looking for? Browse other questions tagged unity 3d-meshes or ask your own question.

0
How do I draw a world rectangle as a GUI

2
Procedural terrain - how to blend textures between dynamic meshes
1
GUI.Box z-index for mouseover
2
Custom shadowmapping in Unity not working properly
0
Particle systems and sprites, draw order issue
0
Line renderer in 3D sorting order
0
Depth Compositing - Background Not Being Rendered
0
Rotating a gameobject in the Inspector doesn't change direction
0
How to prevent a cube from falling through a plane in Unity
0
How can I highlight ui image?