I am trying to find a way to divert a vector3 position around the surface of a mesh which doesn't have a collider. I have a function (found online) that calculates the closest position on the surface of the mesh but it only works if the position is outside the mesh.

In the diagram below, the red arrow represents whats currently happening. It works great when it's outside the mesh and will give a position on the surface of the mesh, but once it moves forward and enters the mesh, it just keeps walking straight. The green line shows what i would like to happen. 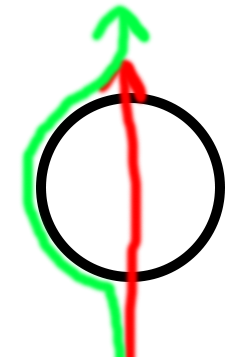 With a collider attached to the object, we can use a method like this to skim along its surface:

Some things to note:

Not the answer you're looking for? Browse other questions tagged unity c# movement vector mesh .

1
Issue with multiplayer interpolation
2
Beginner: How do I calculate a vector?
1
How to find the closest point on multiple colliders within a box?
0
Why is my spherecast returning an incorrect hit on mesh collider?
1
Calculate heading required to turn ship so that its weapon can fire at target
1
How to check for mesh overlap?