How do I find two points at an angle on opposite sides of a circle?

With reference to my previous question:

I'm using micklh's answer, which works perfectly. However, it calculates the gradient based on two points, a starting point and an ending point. I want to change that such that I can give it a center point, an angle in degrees, and a length.

If you look at the picture from the other question: 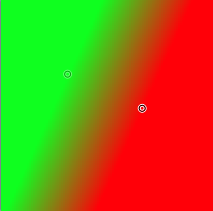 You can sort of discern where the center point is, the x,y of starting/ending locations become the dots based on the length of the gradient.

I assume I would have to:

Am I correct? How would I do those steps?

You might want to briefly refresh your trigonometry (maybe by reading the overview at Wikipedia) if you're stuck.

Keeping that picture in mind, we can take essentially the same steps you described, but in a more mathematical form:

As inputs, you have a centre point p0 (red) and an angle (blue) and a length (orange).
As outputs, you want two points p1 and p2 (in black), representing the points that are length/2 away from p0 on its directly opposite sides.

The gray circle is just for emphasis that trigonometry applies.

You can then use p1 and p2 to draw your gradient.

Not the answer you're looking for? Browse other questions tagged xna c# mathematics color trigonometry or ask your own question.

33
In Pong, how do you calculate the ball's direction when it bounces off the paddle?
2
Relating a point after an image is panned and zoomed
2
Intelligently move aircraft using curves
3
How to make a projectile align correctly with the entity that shot it
1
How to smooth hand drawn lines?
1
Algorithm for spacing points out among a line
3
Scaling a sphere to give identical result, regardless of rotation
1
Find Entity Orientation In Degrees Given Two Coordinates
0
Two Points Rotating Around Circle?
0
Help understanding radar sweep effect in shader code