I'm developing a 2D game. In the game, all entities can rotate 360 degrees. Each entity holds an angle value, and every frame it is drawn rotated around it's center by it's current angle value. For example:

An entity can 'shoot' another entity, a projectile. The Projectile is instantiated with a position and an angle. The position is calculated like so:

All of this creates a problem. I will demonstrate the steps leading to this problem:

1- An entity decides to shoot a Projectile. It's position is calculated like shown above.

2- A new Projectile is added to the game. It is instantiated with the position calculated in the previous step and with the angle of the entity instantiating it, for this example 45.

3- Every frame, each entity is drawn rotated around it's center by it's current angle value.

The angle of the new Projectile is 45, so it is drawn rotated around it's center by 45 degrees.

As you can see: after the rotation, the Projectile is no longer aligned correctly with the entity that created it. They are both rotated by the same angle, but the Projectile isn't 'pointing from the center' of the entity. It seems like it 'moved' a little to the side. 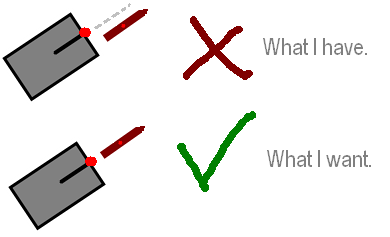 Rather than rotating the projectile about its own centre, then translating it to the end of the cannon, you could translate it first and then rotate the projectile using the origin of the tank (the tank's centre, in this case) by the tank's rotation.

Here is how to rotate a point around another point in c++. (C# version)

Part of the reason for doing it this way is that you can make cannonOffset any relative position to the source entity. So if there is a gun on the front side (1,-1 instead of 2,0), this will still work.

Then add your projectile to the game world and send it off!

Not the answer you're looking for? Browse other questions tagged 2d mathematics geometry .

7
How do I align the matrix used in SpriteBatch and the matrix used in BasicEffect?
33
Why does my object move faster at 45° than at 90°?
1
A formula for point calculation based on value A's proximity to value B
2
Generating transformation matrix for 2D camera with pan/zoom/rotate
7
Adjust Aim Angle for Motion with Accelerating Bullet
1
How to get the center position for AABB of rotated mesh right?
1
Find Entity Orientation In Degrees Given Two Coordinates
0
Define a circle from a point on its circumference and an angle
1
Optimal way to find the closest entity to player with a restricted set of functions