I'm trying to find the orientation for an entity, as an angle in [0º-360º). I've searched for an answer and tried to implement something of my own, but it always fails on the edge cases. For a better understanding of what I am trying to achieve I've created the following image. 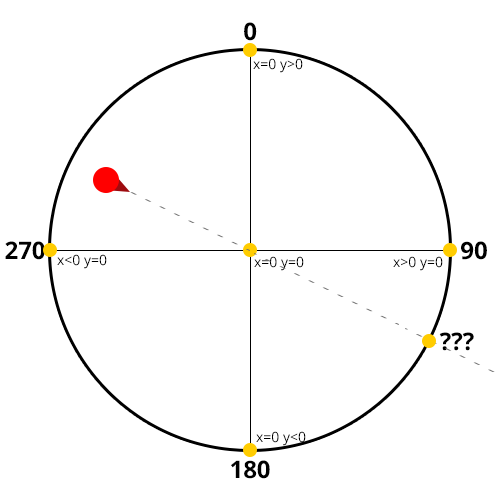 EDIT: It is worth mentioning that I do the conversions to and from radians where needed. Additionally, this is used for an internal simulation (meaning this will not be rendered on screen).

What is known: the center point coordinates which is always at (0,0) and the position of the red entity (x,y)

What needs to be computed: the orientation of the red entity such as it faces the center point (0, 0) in degrees 0-359

In my particular case I have to support negative coordinates. The degrees start at 0 which is at the top and goes CW.

I've tried using atan2(y, x) which I almost got working, but it fails at some edge cases as I will describe.

I could go on about the rest of the quadrants, but then I get another issue: when the x or y coordinates for the entity are 0 (only one, not both).

I could write some if cases to adapt the result accordingly, but I figured there must be a smarter solution to this and a faster one, since this needs to be computed 60 times a second.

I've also tried some custom math, using triangles, but ultimately I have to manually do some checks to get the correct answer.

I don't know if this is of any value for the answer, but I'm trying to implement this in Java/Kotlin, though I'm not looking for someone to just give me the magic piece of code that I can just paste and have it working, I'm looking to understand how it can be done better.

Is there a better way to achieve the result I want here?

The solution that worked perfectly for me is the following

As far as I can see it covers the edge cases.

We have - at least - three issues to consider:

Let us be clear, measuring from the x axis, counterclockwise, is the convention.

I said at least three issues because there is another one to consider. You depict the positive y axis on the top. That is what we do in math, however... well, for screens the y axis increases downwards because of historical reasons. In fact, the origin is in the top left corner.

I do not know if you want to take this into account, of you already are doing it (or whatever software you are using takes care of it for you).

So, what transformation on the orientation will take it from the atan2 representation to the one you want...

If you also need to take the position from another point:

If you also need to flip the vertical axis because of screen coordinates:

Oh, and add a whole turn if it is negative

Note: Libaries often work in radians, however you use degrees. I speak in turns to keep it agnostic. Do your angle conversions as needed.

As Quentin points out we can do this by just flipping the parameters of atan2.

If it isn't clear that is the same, consider that we needed to do a counterclockwise quarter rotation, and change the sign. We do the rotation by doing this atan(-y, x) (if you wish, you can confirm by trigonometry), and then change the sign. We should not need to mod by a whole turn here. However, we still need to add a whole turn if the result is negative.

Let's say (xi,yi) are the normalized coordinates of the red entity (length = 1), then:

to compute the angle:

A formula for a clockwise angle from 0 to 360 degrees:

Not the answer you're looking for? Browse other questions tagged mathematics .

33
Comparing angles and working out the difference
4
360+ degree rotation skips back to 0 degrees when using Math.Atan2(y, x)
5
Discover x,y coordinates given set arc distance and rotation
3
How to make a projectile align correctly with the entity that shot it
1
Distance to rect edge from point based on direction
0
Angle between start and current rotation
1
Find the smallest angle to turn between two angles in range 0..1
1
Rotating an Icon On MiniMap