Moving ships between two planets along a bezier, missing some equations for acceleration

OK, I already posted this over at math.stackechange.com but didn't get any answers :(

First of here's a picture of my problem, the description follows afterwards: 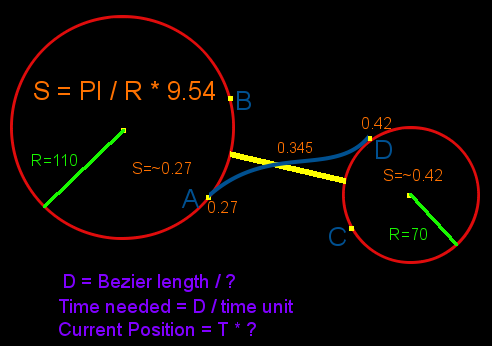 So I got all the points and values set up.

So far so good, I got that up and running, now my problem.

When S P1 and S P2 differ to much, the ship jumps between the two speeds when it reaches it's destination, which looks pretty bad. So I need to accelerate the ship between Point A and Point D from S P1 to S P2.

The thing I'm missing are in purple, those are:

ATM I calculate the length of the bezier by calculating the distance between N of its points. So what I think I need, is a way to scale the T I need to put into my bezier calculation accordingly to the acceleration.

OK, I've got everything working, it took forever, so I'm going to post my detailed solution here.
Note: All code samples are in JavaScript.

So let's break down the problem into the basic parts:

Getting the Bezier right

Finding some code for drawing a Bezier curve is easy, there are a number of different approaches though, one of them is the DeCasteljau Algorithm, but you can also just use the equation for cubic Bézier curves:

With this, one can now draw a bezier curve by calling x and y with t which ranges from 0 to 1, let's take a look: 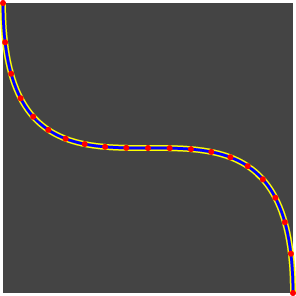 Uh... that's not really an even distribution of the points, is it?
Due to the nature of the Bézier curve, the points on 0...1 have different arc lenghts, so segments near the beginning and the end, are longer than the ones which are near to the middle of the curve.

Mapping T evenly on the curve AKA arc-length parameterization

So what to do? Well in simple terms we need a function to map our T onto the t of the curve, so that our T 0.25 results in the t that's at 25% of the length of the curve.

How do we do that? Well, we Google... but it turns out that the term isn't that googleable, and at some point you'll hit this PDF. Which sure is a great read, but in the case that you've already forgotten all the math stuff you learned back in school(or you just don't like those mathematical symbols) it's pretty useless.

What now? Well go and Google some more(read: 6 hours), and you finally find a great article on the topic(including nice pictures! ^_^"):
http://www.planetclegg.com/projects/WarpingTextToSplines.html

In case you just couldn't resist downloading that PDF's although you'd already lost your mathematical knowledge a long, long, time ago(and you managed to skip the great article link), you might now think: "God, this will take hundreds of lines of code and tons of CPU"

No, it will not. Because we do what all programmers do, when it comes to math stuff:
We simply cheat.

Let's face it, we don't need endless precision in our game, do we? So unless you're working at Nasa and planning on sending people the the Mars, you won't need a 0.000001 pixel perfect solution.

So how do we map T onto t? It's simple and only consists of 3 steps:

That's all! So now let's take a look at the complete code:

This initializes our new curve and computes the arg-lenghts, it also stores the last of the lengths as the total length of the curve, key factor here is this.len which is our N. The higher, the more precise the mapping will be, for a curve of the size in the picture above 100 points seem to be enough, if you just need a good length estimate, something like 25 will already do the job with being only 1 pixel off in our example, but then you will have a less precise mapping which will result in not so even distribution of T when mapped to t.

The actual mapping code, first we do a simple binary search on our stored lengths to find the largest length that's smaller then targetLength, then we just return or do the interpolation and return.

Again this computes t on the curve. 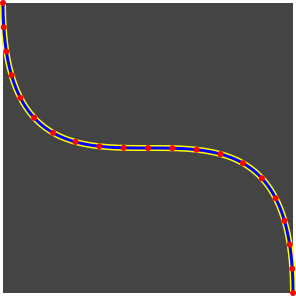 By now using mx and my you get an evenly distributed T on the curve :)

Wasn't that hard, was it? Once again, it turns out that a simple(although not perfect solution) will be enough for a game.

In case you want to see the complete code, there's a Gist available:
https://gist.github.com/670236

So all that's left now is to accelerate the ships along their path, by mapping the position onto T which we then use to find the t on our curve.

And there you go, the ships are now moving smoothly along the path.

When you're reading this, everything works fine and dandy, but I initially had some problems with the acceleration part, when explaining the problem to someone in the gamedev chatroom I found the final error in my thinking.

So and that's all! Thanks for reading ;)

The issue is that a ship would not take that trajectory naturally. So even with it working perfectly it still won't look right.

If you want to simulate the smooth transition between planets I would suggest actually modeling it. The equations are very simple as you only have two significant forces: gravity, and thrust.

You just need to set your constants: Mass of P1, P2, ship

With each game-tick (time: t) you are doing 3 things

Might seem like a lot of work but it can be done in a dozen lines of code and will look very natural.

If you need help with the physics let me know.

I found an excellent article explaining a possible solution to this problem with a code example written in javascript. It works by "nudging the t" value into the right direction.

This question has already a lot of cool answers, but i found this solution to be worth noticing.

Thanks for your excellent page describing how you solved this problem. I did something somewhat different than you in one detail, as I was deeply memory constrained: I don't build an array, or have to search it for the right 'segment' with a binary search. This is because I always know I am moving from one end of my Bezier curve to another: Therefore, I simply remember the 'current' segment, and if I see that I am going to go out of bounds of that segment to compute my next position, I compute the next (or previous) segment (based on direction of travel.) This works quite well for my application. The only glitch I had to work out was that, in some curves, the size of the segments were so small that my next plot to point was - at rare times - more than one segment ahead of the current one, so instead of just going to the 'next' or 'previous' segment (based on direction), I had to compute segments forward (or back) until I found the one that my next point was 'in'.

Don't know if this quite makes sense, but this certainly helped me.

That kind of modeling is strange, and can produce weird illogical results. Especially if the starting planets speed is really slow.

Model the ships with a thrust power.

When the ships are on their last orbit on the starting planet, accelerate with full thrust.

When the ship gets within a certain distance use reverse thrust to slow the ship down to the target planet's orbit speed.

Edit: Do the entire simulation at once when a node is about to leave the orbit. either send all the data, or send just a few of movement vectors at intervals, and interpolate between them.

If I understand it correctly, your problem is over-constrained.

I believe that you want the spaceship to travel along a specified path between orbits in some time t, and you also want it to accelerate from speed s1 to speed s2 in the same time t. Unfortunately, you can't (in general) find an acceleration that satisfies both of these constraints simultaneously.

You're going to have to relax your problem a bit to make it solvable.

I came across this answer because I'm looking to distribute points evenly along an svg path that uses a bezier curve.

Despite MDN saying it's deprecated, you can use the path.getPointAtLength to get the correct result. https://developer.mozilla.org/en-US/docs/Web/API/SVGPathElement/getPointAtLength

It currently works in Chrome/Safari/Firefox, and should work in IE/Edge as well but I didn't verify those 2.

The problem with the accepted solution

As Bezier an exponential function, we expect different rates of advance in different areas of the curve.

Because Ivo's solution linearly interpolates between these initial exponential samples, inaccuracies will be heavily biased towards ends / middle of the (typically cubic) curve where those deltas are greatest; so unless the sample rate N is increased greatly as he suggests, errors are apparent, and at some level of zoom, will always be apparent for a given N, i.e. the bias is intrinsic for that algorithm. Not good for e.g. vector-based graphics where zoom may be unlimited.

An alternative solution is to linearly remap distance to t after countering the natural bias that the Bezier function produces.

Assuming this is what we ideally want:

but this is what we get from the Bezier position function:

By looking at N samples taken, we can see where distance deltas are greatest, and resample ("split") midway between the two adjacent distances, increasing N by 1. For example, splitting at t=0.9 (which is midway in the largest delta), we might get:

We repeat this process for the next largest distance interval until the maximum delta between any two distances in the entire set is below some minDistanceDelta, and more specifically, less than epsilon away from specific distances we want to map to steps of t; we can then linearly map our desired t steps to corresponding distances. This produces a hashtable / map which you can cheaply access and whose values you can lerp between, at runtime, without bias.

As the set grows in N, the cost to repeat this increases, so ideally do this as a pre-process. Each time N increases, add the two new resultant intervals to an intervals collection while removing the old, single interval they replaced. This is the structure on which you work to find the next greatest interval to split into two. Keeping intervals sorted by distance keeps things easy, as you can just pop next work item off the end, and split etc.

We end up with something like what we ideally wanted:

Since we are taking guesses at every step, we will not get exact the exact distances 2, 4 etc. we wanted, but through repeat iteration these get close enough to the desired distance values so you can map to your t steps with fair accuracy, eliminating bias due to near-equidistant sampling.

For most cases, Ivo's solution will work well, but for cases where bias must be avoided at all costs, be sure that your distances are as evenly scattered as possible, and then linearly mapped to t.

Note that splitting could be done stochastically rather than splitting down the middle each time, for example we might have split that first example interval at t=0.827 rather than at t=0.9.

Not the answer you're looking for? Browse other questions tagged 2d mathematics or ask your own question.

78
How does one prevent homing missiles from orbiting their targets?
2
3D Flight Path Generation and applying a curve to x,y,z
4
Controlling roll rotation when travelling along bezier curves
1
How to smooth hand drawn lines?
1
Getting the angle between three points?
1
Moving a 2D object along circular arc between two points
0
gravity simulation implementation