I am currently working on a curve implementation for use in Unity which includes an editor:

The aim is to get an object to follow the path represented by the curve at a constant velocity. Currently you can place nodes in the curve and modify the weights of each node via handles to control the curve segments between nodes. The curve implementation is a standard Bezier curve.

This is computing the point in the curve slightly ahead of the current point and setting the object to "look at" that point. The pitch and yaw of the object will therefore be correct but the roll cannot be easily controlled.

I am currently trying to implement a way to control the roll as the object travels along the path but my maths skills are failing me once again. In the editor I am thinking of placing "roll" nodes along the path which represent the desired roll angle of the object when it reaches that node and interpolating between these nodes for the points in between. My questions are as follows:

When the object reaches the point when it should be "upside down" in the loop it spins quickly to be the facing upwards again. If I can make it so that the up vector of the object along the path follows the "natural" rotation along the curve I can then apply Quaternion control points to properly control rotation. Sorry if this is not entirely clear, I don't know the proper terminology for a lot of this stuff.

Edit: I have found a solution that works for me (as mentioned in the comments):

Use an iterative approach. Start with a reference frame at the start of the bezier. Then, for each new point, use the orientation of the previous frame to orient the next one:

The problem with this approach is that while it is locally continuous, it ignores the orientation of all control points but the first.

The full code is this: https://pastebin.com/t5LFLhL9 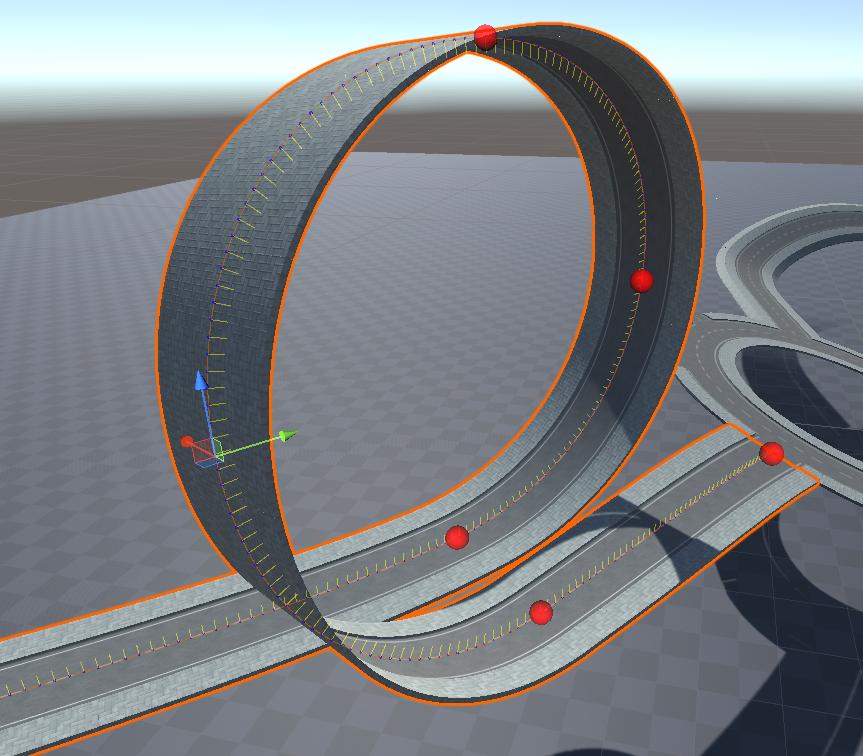 As you can see, this works vertically too now. The only problem is that you have to calculate the entire curve, you can't just sample the normal of the curve at any point along the bezier without calculating the entire array of points. However, since I assume your curve is not updated during run-time, this shouldn't be a problem. I personally recommend updating these points asynchronously while storing the current array in a variable, so that it can update at a slower frequency than the main loop. This is, I think, a good compromise.

I'm looking into this as well. I only have a solution that works for beziers that are somewhat horizontal, the closer they get to vertical, the less it works.

I'm essentially converting the local up vector into an angle, interpolating that, and turning it back into an up vector.

Conversion from normal to angle:

You use the vector along the bezier (p[t + 1] - p[t]) and take the cross product with the worlds up vector. That gives you the right vector relative to the path. Then you take the cross product between that and the local forward vector, and that gives you a vector that points 90° to the bezier, upwards. You can then measure the angle of the transforms up vector to that, and you should get the local roll.

This roll is then interpolated along the path.

Generating a normal from the local angle works similarly.

This is the code that I wrote:

Now, as I said, this only works if the path is somewhat horizontal, as it relies on the cross product of the forward vector and Vector3.up to return a vector that is long enough to avoid floating point error or division by 0 (when the vector is normalized)

I personally used it for a RoadSystem that lets you edit roads, connect them to intersections, and it also generates a graph for pathfinding, and can then generate a line from your position to the goal. In that use case, this approach works well enough, as roads don't really go up vertically.

You could just stare the roll value before each

And then just adjust the roll value as you want in a separate algorithm and then reassign it to the airplane's roll. The Euler roll 0 is always straight and 360 = 0.

If this did not help pleas clarify what is unclear an I will clarify.

EDIT: One way to work around this is to store the rotation and whenever the yaw has a difference (remember the 360 looping so 5 to 355 is only 10) from the previous frame is greater than 170 (the yaw will flip 180 when the flip ocur) degreas just add 180 to the roll value.

Not the answer you're looking for? Browse other questions tagged unity mathematics movement vector beziers .

2
Consistent normals at any angle in bezier curve

61
Moving ships between two planets along a bezier, missing some equations for acceleration
3
Bezier Curves for visual programming node connectors
2
Intelligently move aircraft using curves
0
How to pitch, yaw, roll, an object like a flight simulator in OpenGL?
1
Unwanted roll when rotating camera with pitch and yaw
0
How to rotate to look at target
6
How to keep a cubic bezier curve symmetric while moving points
8
How to create an illustrator/photoshop-like pentool for creating bezier curves in Unity
0
2D Rotation of an object along a curve line