Please note that the original curve/spline could be open or closed curve with the ends joining. I know that arc length is key to achieving this, but I’m not sure to do this. 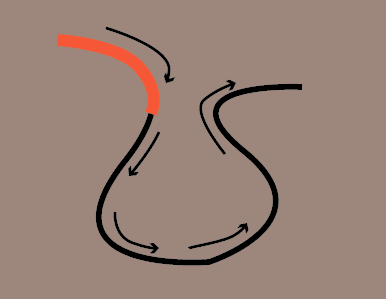 The smaller curve was reduced using the solution from How to move points of a multi-segmented bezier curve to one side. DMGregory recommended Moving ships between two planets along a bezier, missing some equations for acceleration, which I have to admit I didn’t understand enough to fully utilise to solve my problem. One thing though that I took away from the solution was I needed to express the smaller curve as percentage of the original curve, so I implemented a slider as below.

My general understanding is the original (full) curve say runs from some t = 0.0 to t = 1.0 and my sub curve at any given point is made of a subset of those values, so I need to change the values along the full curve whiles preserving the arc length. Below are the methods I use to calculate the arc length. My problem is how to tie all this together to arrive at a working solution.

You can build curve inside a coroutine and fill it with points while it building. You can use particle that will move you curve trajectory and left the tale behind.

Not the answer you're looking for? Browse other questions tagged unity mathematics curves beziers .

61
Moving ships between two planets along a bezier, missing some equations for acceleration
1
How to move points of a multi-segmented bezier curve to one side