I followed a tutorial on how to build a spotlight using DirectX. This tutorial uses a point light equation plus a line of code to limit the light to the shape of a cone. I have everything working, but the equation for constraining the light uses a constant exponent to control the broadness of the light, which is all well and good if I was just tweaking the value for looks alone, but I also want to know the precise size of the cone in order to do culling on the CPU side. Here's the equation:

what I'd like to do is create an angle theta for the cone on the CPU, and then create the exponentConstant based on that and the range aka cone height, but I don't know how that math would work. And I realize there are other spotlight equations, but I like this one because the attenuation works identically between point and spot lights. Can anybody lend a hand? 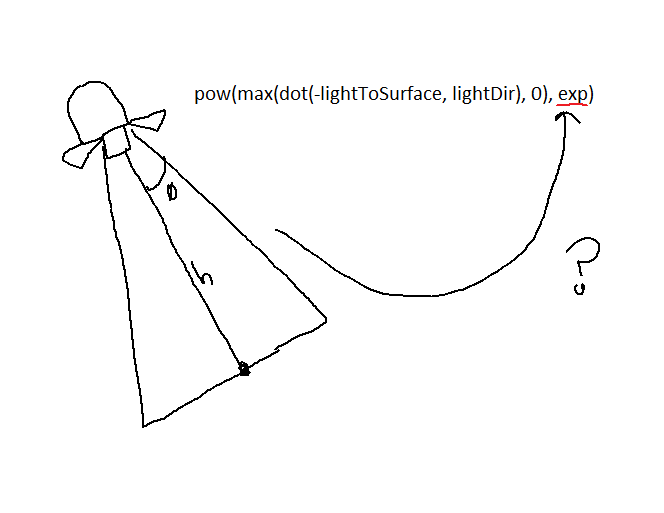 link to the tutorial: https://www.braynzarsoft.net/viewtutorial/q16390-21-spotlights

As I mentioned in the comment, raising a number to an exponent won't make the result zero unless it was already zero to begin with. (At least not in infinite-precision real numbers. We could try to exploit floating point precision limits here, but I think that's both more complicated and less efficient than the alternatives we have at our disposal)

So even though raising the exponent does make the bright part of the cone narrower and narrower, there are still non-zero values well out into the dark part. All the way out to 90° from the light direction, in fact (again, discounting numerical precision for the moment).

Since you're rendering in high dynamic range, it's hard to pick a cutoff value that's "dark enough" that it won't have any impact on rendering, even if your exposure is extremely high. We could go super conservative, but then you'd be treating your cone as wider than it needs to be most of the time, reducing the savings you get from culling. Or we could try shifting our cutoff based on our exposure settings, but again - too complex, and we can do better!

Since you say you like your distance attenuation function as-is, let's keep that unchanged. We'll just replace this line:

(Note that I changed your variable name - the tutorial calls it "light to pixel" but it really points from the surface pixel to the light! So let's name it in a way that's not backwards 😉)

First, we'll note that the inner term is just the cosine of our angle from the light's axis:

Within our desired cone wedge, that hits a minimum value we can compute on our CPU, and pass as a uniform:

(If you want, you can pre-compute the reciprocal of the denominator and pass it as another uniform so this division becomes a cheaper multiplication per-pixel).

Now you're guaranteed the spotlight brightness hits zero at this limiting angle. But you can still use a power function to shape the falloff curve to your liking a little - here the exponent is arbitrary, we're not counting on it to hit a specific angle width, we're just tuning for look at this point.

Not the answer you're looking for? Browse other questions tagged shaders directx directx11 lighting geometry or ask your own question.

7
SRV from UAV on the same texture in directx
2
Does the standard lighting equation ever allow objects to be brighter than their textures?
0
Compute cone angle (cos) given side and hypotenuse vectors at time 0 and world matrix at time 1
16
What is the utility of squared radius and inverse squared radius for lighting computations?
1
Spotlight Culling. Plane vs Cone Shape
0
Calculate the leaning angle
1
Can ANGLE OpenGL ES 2.0 use the same color / depth surface as Direct3D11?