How do I adjust the start diameter of a spotlight in Unity?

To clarify, I'm an experienced 3D modeller, but there are hiccups here and there getting used to Unity's interface.

I'm working with an adjustable spotlight for a game; it can be mounted and directed just like a turret. To do this properly, I need the start diameter of the spotlight to match the aperture size of the model. To clarify that this is not the inner diameter, I've made a drawing. 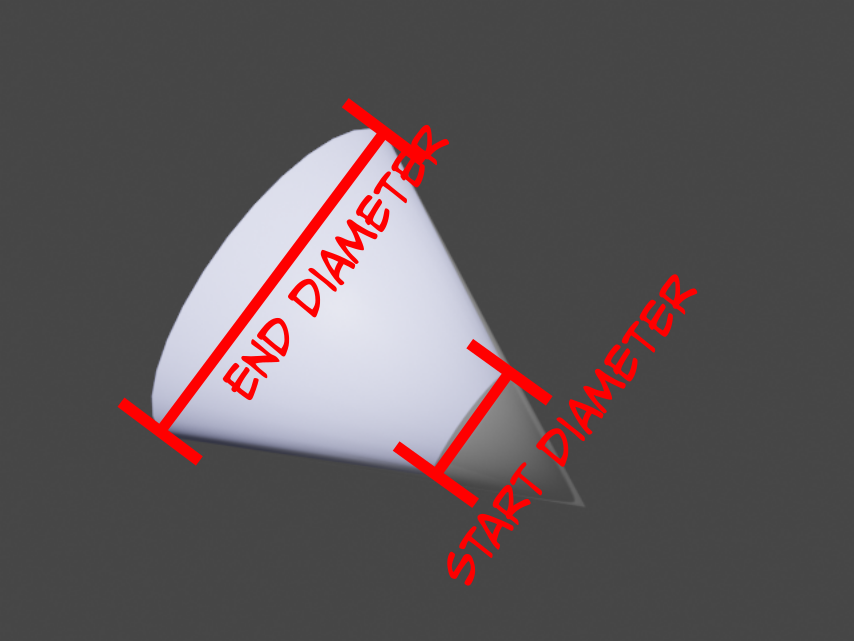 That is, I need to be able to make a spotlight that begins further down its cone. I can't just back the light up, as the emitted light will invariably collide with its own mesh and it won't work at all. I would also have artefacts like the player standing behind it and being lit by some invisible light source...

I expected this to be a lot easier than it is. Can someone point me in the right direction? Thank you!

You are asking two different questions in the same post. My answer will address the tricky part of setting a spotlight that accounts for different user-defined parameters.

If you want a light to not illuminate certain GameObjects, simply assign them to a different layer and disable that layer in the Culling Mask property of your Light.

So, you want to design a Spotlight by defining its start and end diameters. However, built-in spotlights in Unity are cone-shaped, with no option for a starting area of light. My solution is a workaround on this, by conveniently setting a spotlight to behave as you want.

Slant angle of a cone

Unity only exposes the Spot Angle variable. Fortunately, we can solve this with simple trigonometry. Geometrically speaking, a Spotlight resembles a cone. If we look at a cone from the side, its silhouette becomes an isosceles triangle. We can then divide such triangle into two complementary, right triangles:

Slant angle of a truncated cone

Until now, we only had a base diameter. Let's extend this with a new parameter: the top diameter.

The introduction of a new diameter transforms the cone into a truncated cone. A side-view of a truncated cone is an isosceles trapezoid. We can then divide such trapezoid into two complementary, right trapezoid:

We need some more steps before writing a new formula. Let's draw a new line inside one of the right trapezoids, so we divide it into a rectangle and a right triangle:

I'm now assuming you are only interested in the distance between your diameters. So, here \$h\$ represents the truncated cone height, not the whole cone height.

Due to similarity, we know that the whole cone's slant angle and the sub triangle's acute angle are the same value. However, we need the length of the opposite edge. Its value is the difference between the base and top radii: \$l = R-r\$. Let's plug this value into the formula we used before: \$\theta = arctan(\frac{R-r}{h})\$. Finally, let's swap radii for diameters. The final formula is:

Let's convert all this maths into code! We are going to create a MonoBehaviour script. It will compute the values we need when changing its parameters. Once assigned to the Light GameObject, it will update the light properties automatically:

This code doesn't check against wrong values or trigonometric edge cases, you should include them if you want to use this in production.

After re-computing values, we must also update the light position. We need this offset because e.g. a constant start radius requires the light source position to move back and forth (because the "outside hull" is still a cone).

Then, we must parent the GameObject with the Light and CustomSpotlight components to an empty GameObject. Such GO will be used to move and rotate the spotlight around the scene, while its child Light will adjust its local transform to get the desired effect.

Not the answer you're looking for? Browse other questions tagged unity lighting geometry .

3
How can I calculate spotlight lighting in Vertex/Fragment shader in Unity?
3
How do I render a volumetrically lit spotlight?
2
How to adjust the width of a LineRenderer
0
Adjust Line Renderer start position to follow bone rotation
1
Unity - how to remove standard sky but keep the lighting?
0
Unity Can't adjust firing rate
0
Figuring out the exponent in a spotlight equation from the angle of a cone