unity: input event consumed by image raycast target that is "under" a sprite with a 2D collider

I am having a hard time getting my UI to work.

Basically I have a canvas with a UI image A that is the size of the screen. This image has raycast enabled and if effectively receiving inputs.

Not in the canvas I have a sprite B that have a 2D collider attached to it. No matter what I try, the UI image is always consuming the input event when I click on the sprite.

What do I need to do so that the sprite B gets the input event BEFORE the image A and consume it?

EDIT: Those two elements are part of the UI and must be interactable at all time. I use a sprite for the second element as it is dragged from the UI inside the game and I don't want to make it an image.

The image A is a big cancel button with opacity 0 on the whole screen that must be active at all time.

I just want to know if the Collider of sprite B can intercept the input before the image A. If it isn't possible, I'll create an Image B instead of the sprite B and destroy it to create a Sprite with the same texture when the is interacted with.

If you need the Image enabled during the process but also do not want it to 'receive input' you can get a reference to the image and disable the Raycast Target. Then re-enable it when you need it.

If you never want it to be selectable you can just uncheck the box in the bottom right. 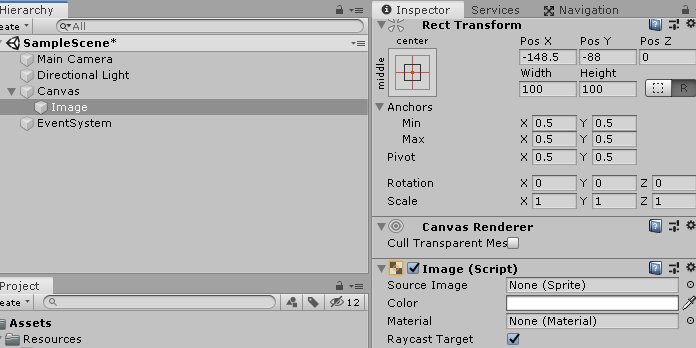 As per the comments it doesn't look possible to mix input systems together. I will use the answer given by IQew and use plain Image UI Element to interact with the mouse, drag the object and then, when it is in game I will switch it to sprite , either by destroying the gameObject with the image attached and creating a new Sprite in place, or just toggling the Image component off and the spriteRederer component on.

Not the answer you're looking for? Browse other questions tagged unity 2d input raycasting events .

0
Button image on game menu is updating too slow
1
Event-/Input system with SFML: Cannot move diagonally in 2D
1
Unity 5 - Manually zooming/scaling in and out of an image with a text layer while still retaining text sharpness when zoomed?
0
State Machine implementation issues
0
Button not clickable if it's under a Content Size Fitter + Horizontal Layout Group in Unity?
0
Flipped vertical button element on Canvas not reacting
0
Raycast returns miss even though it clearly hits its target collider, how to debug?