I am designing a hint system for a "game".

The game is an interactive art simulation for multi-touch and although it is rather intuitive to figure out the basics of how to run that simulation there are some more complicated things to it that I would like to help the user discover.

My design rules are that it needs to be abstract and mostly transparent. There can be no sounds or words to this hint system. I am hesitant to use symbols as well. I realize this makes it quite difficult to effectively communicate with the user but that is sort of the point. It is supposed to be a bit of a puzzle so it is rewarding to solve and in this case it is completely fine if the user does not.

These hints will show up when the user is close to figuring out a new aspect of the simulation. The goal of it is to communicate what the missing piece is for them to get there.

For example on one of the hints I need to get the user to hold a new finger down for more than 1 second under certain conditions.

I have chosen a ring/circle as the core shape for the indicator. This makes sense because generally a hint appears somewhere they are not touching and they begin being "in progress" once their finger is on the indicator. I am good with shaders so I will make it look better later.

So far the hint has been reading but I am concerned about how clear it is whether they failed or were successful at executing whatever the hint was hinting about. I have thought about having the indicator turn "green" for good or "red" for bad but the problem here is that color scheme isn't universal. AND most critically it begs the question of what a "neutral" color is/should be for the indicator before the user has started on the hint and while they are doing it and the indicator is following their finger. Teal was my gut instinct but that color is already pretty close to green. I am worried about the use of just color and specifically the colors red/green so I am looking for other ideas on how I might be able to get this indicator to communicate success or failure following the rules at the top.

Are there other ways I could communicate success/failure?

In addition does anyone know of any other games/projects that use a non-verbal/written hint system communicating more abstractly/with colors? Would be good to have some reference. Any related articles are great too.

Here is sort of a state diagram of the indicator if that helps. I have included a simple/mockup of the indicator with very simple shapes but obviously to give you an idea it will look better. In the holding example the hint would start by being in the state "hint start" somewhere on screen and when the user touches it would transition to "hint in progress". If the user releases before 1 second it would then go to "failure" and turn red but if the user releases after 1 second it would go to "green" for success. 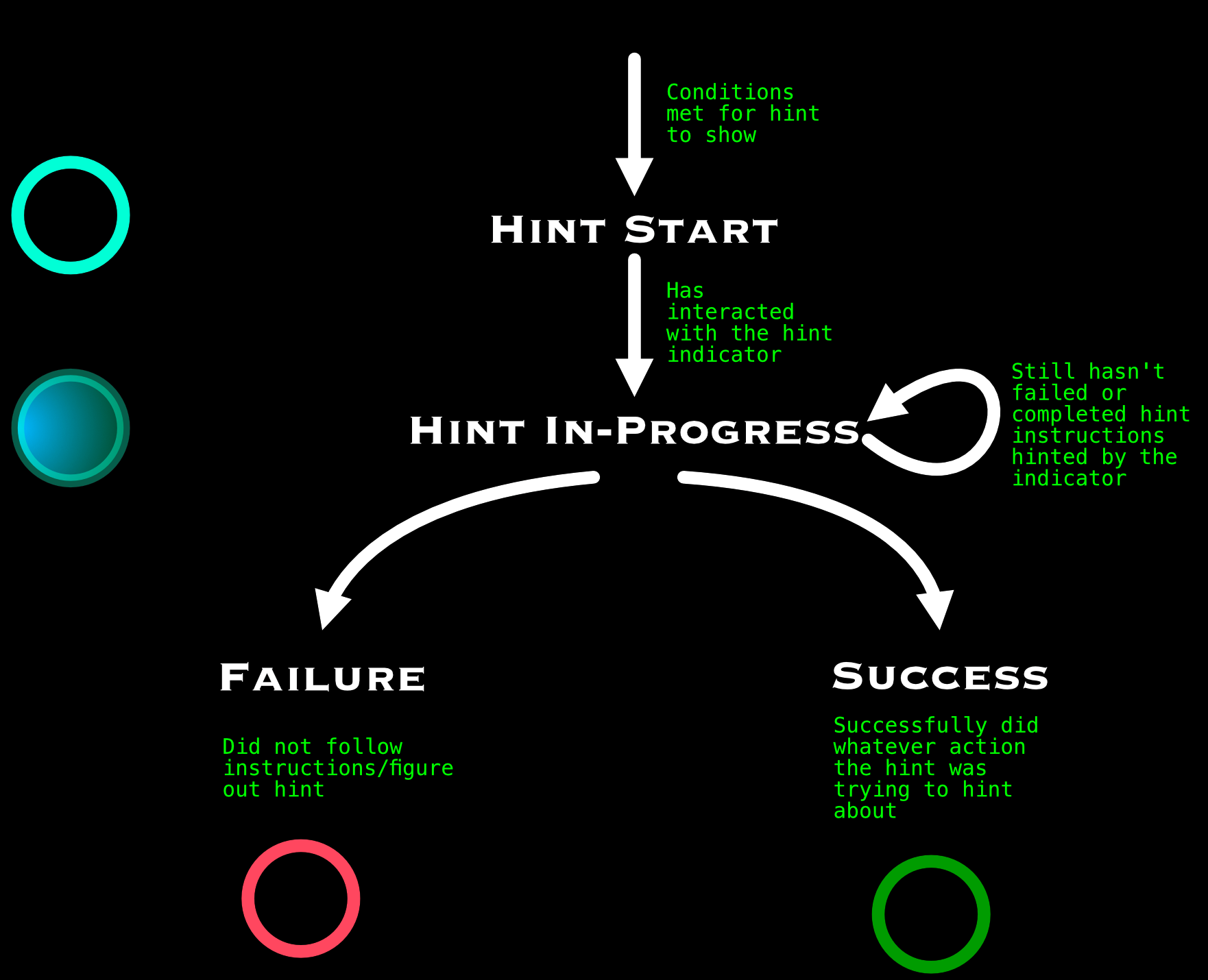 I would consider using an icon of some kind. For example, a smiley / emoticon system:

If desired, you could also couple the icon with color, but I wouldn't use color as the only means to convey information. As you noted, color meaning isn't universal. Additionally, it presents a challenge for users that are color blind & red-green color blindness is the most common form. In my experience grey is a common neutral color.

I'm fairly sure red = bad / incorrect / stop, and green = good / go, is fairly universal, mainly I think because of how stoplights use the 2 colors. So your should be fine just using those colors, at least that's what I think coming from the cultures / locations I represent, which would be the US and Japan.

This would depend on the style and feel of your game, but for the neutral color, you can have something like a yin and yang of green and red, and when the player is getting closer / further from the hint, you can have the green / red portion "overtake" the other side.

If you're really worried about the color scheme, perhaps get rid of it and add a meter / slider that goes up when something is being done right, and down when the player strays from the hint.

Another idea I have is to have the player start off the game with a relatively dark screen, or a black tunnel effect, and the more hints they clear, the brighter the screen gets, or the less of a tunnel effect there is.

Another consideration is to have a meter that does not go below the neutral / starting point. Using your color indicator as an example, instead of an indicator that goes from neutral to green or red, you'll have an indicator that starts at the neutral color, and only goes toward green. If the player gets closer to the hint, the color will turn greener. The "failure animation" can be sudden drop from the green to the neutral color, and the :success animation" could be the green circle turning different shades of green, or colors in a "fun" sort of way. This way, you won't have to worry about universal colors, as the players will eventually figure out what the change in color means.

10
What are the downsides of only explicitly informing the player of *success*?
2
Making an interactive 2D map
5
Colors for villains, good guys and neutrals
4
How would I tell the player what options they have without explicitly telling them?
3
The meaning of colours in other cultures
9
How can I make my Color Mixing game more difficult?
2
Interactive ways to answer a yes or no question in a VR game?