How can I parent an object whilst animating?

I've tried dropping the object I want influenced onto the character's parent object in the hierarchy and accessed it via the Animation tab. I added the object as a property and adjusted it's position, but the results have been pretty mixed.

How can I have an object automatically follow the animation without manually adjusting its curves for each frame?

unity animation
Share
Improve this question
edited May 9, 2019 at 1:18

In Unity, your Armature which was imported from Blender should be modeled as a hierarchy of GameObjects. You can make GameObjects children of these bones to have them move with the bone during an animation, just like you would in Blender. No further animation changes are needed unless you need the objects to reposition beyond just following the parent.

In the following image (taken from another answer), the wrench is a GameObject which is not a part of the imported model/animation. Its parent is the hand. Whenever an animation plays, the wrench will follow the hand. 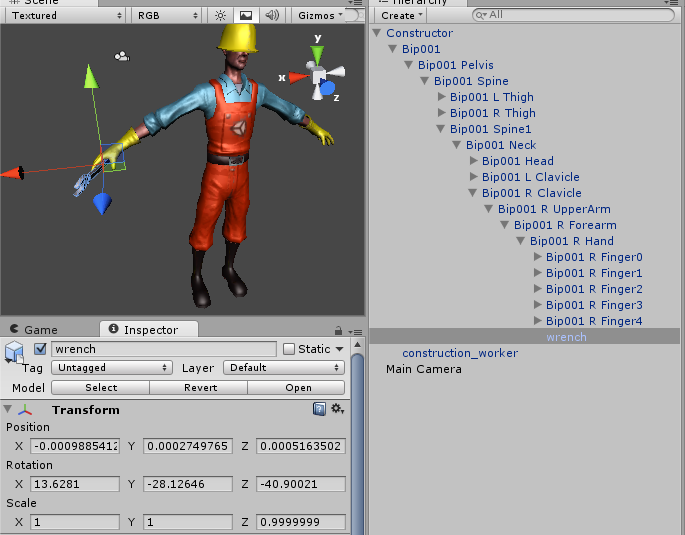 Not the answer you're looking for? Browse other questions tagged unity animation .

2
How to port animation from one skeleton to another?
4
Why are my animated objects (from Blender) always playing at the global origin in Unity?
1
No animation clips in assets folder
0
Instantiating a prefab as a child to another game object (spawn point) - Unity 3D - C#
0
Animating child objects via parent object animator in script
5
unity / blender -- positioning items / clothes on character
0
What is an alternative solution to the problem of polygon collider2D not following character (animation)movement?