I'm working on 2D top down zombie game. I started working on it as having a static 2D map and on every tick you update the coordinates of every object, including the player itself relative to the static map. Every object has x, y and angle against x axis x, y, theta.

But I would like to also provide a way to see it as a kinda third-person shooter (still top down 2d just different center of coordinates), where camera and coordinates are connected to the moving player object. So the player would always have the 0, 0, 0 coordinates and every other object transformed xT, yT, thetaT coordinates. 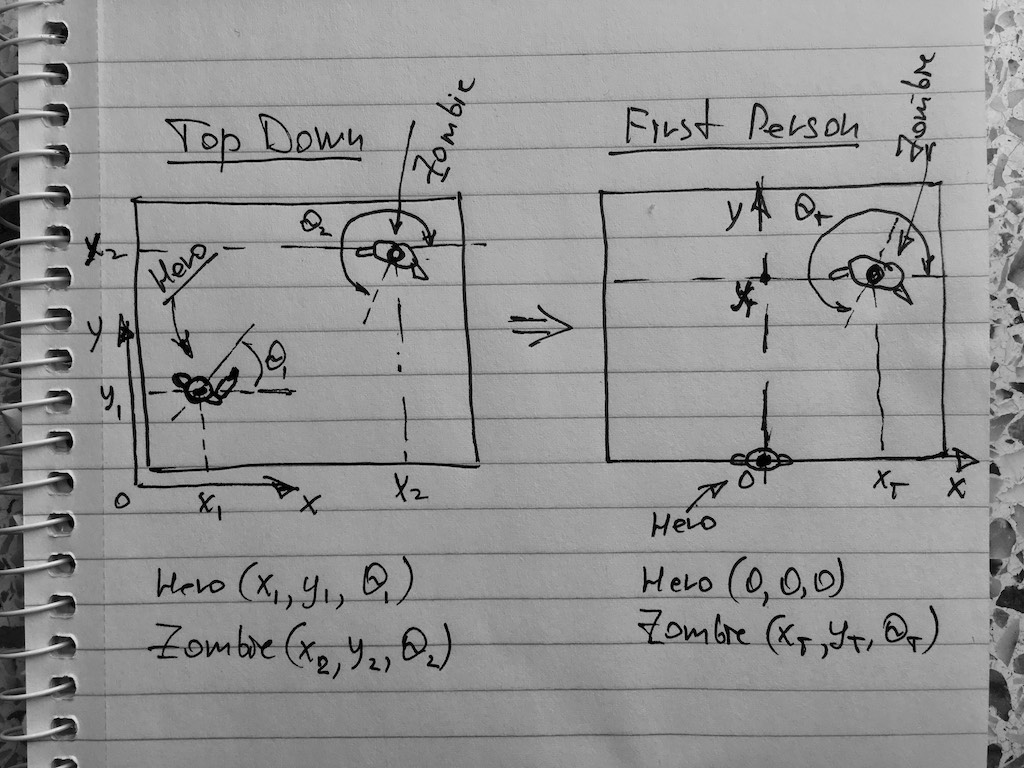 You should keep everything in the static world frame and only transform them into the player's coordinate frame when necessary. This will reduce many headaches along the way because your static reference frame will be independent of the player's position and velocity.

That makes it possible to reference objects w.r.t fixed coordinates or regions in the level which never have to be changed. For example "is this monster inside this door?" becomes a simple box vs. box check and requires no reference frame transformation. It also allows you to cache the coordinates of every non-moving object.

As for "transforming into the player's reference frame every tick," yes, you do this but not on the CPU. Just set up your game's rendering system to appropriately adjust the World and View matrices so that the GPU takes care of that for you at draw time. The standard pratice would be to set up an orthographic perspective matrix and a view matrix centered on your player.

Not the answer you're looking for? Browse other questions tagged coordinates linear-algebra .

2
Converting 2D coordinates from multiple viewpoints into 3D coordinates
10
Get points on a line between two points
4
How to use the SDL viewport properly?
3
How do you transform a coordinate system from Cartesian to Isometric?
0
convert world to screen coordinates with camera position and camera angle
2
How to raycast down to the floor plane to determine world space coordinates in Godot