How do you transform a coordinate system from Cartesian to Isometric?

Apologies if my example is a bit contrived, I've been trying to figure out how to apply matrix transformations to this coordinate problem, and I'm not getting the right output. I need to understand the math for this (some pseudo code might be helpful). See graphic on bottom.

Now assume we have a World instance called World_A with the following properties:

In other words, World_A has a 2-dimensional, 4096 x 4096 pixel map with an initial orientation of -90 degrees (inverse Cartesian plane), which can be divided by 64 x 64 named cells (denoted by their calculated subcoordinates [p,q] e.g. Cell_p_q), and an active cursor (denoted by its rendered position [x,y])

Using the coordinates of an active cursor [x,y] we can calculate which cell the cursor is over (some Cell_p_q) and designate that cell the Active_Cell which is then highlighted. Example: if the cursor is at [8,16] then we determine that it's over Cell_1_1 and Active_Cell = Cell_1_1.

Both worlds share the same Cursor with position [x,y].

Here's a quick screenshot of what I'm experimenting with; you can see in this graph that World_A is overlaying World_B coordinates. My math is brute-force contrived, but it works, what I want is to understand the matrix transformation way of doing this. 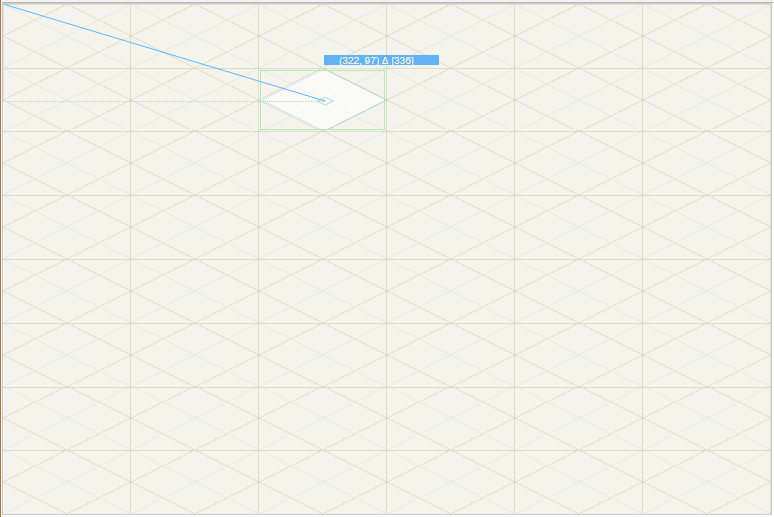 Assuming "up" is to the right top by default (with an orientation of 0) you need to rotate the coordimates by -45° plus the orientation in degrees, then scale it on the y axis by half. This results in the

To convert Cartesian coordinates to isometric the basic matrix operations are:

You can composed the rotation and scaling into a single 2X2 matrix. If you want to also include a translation (to move the origin of your isometric projection), you'll have to use a 3X3 matrix.

This related answer goes into more detail with diagrams and pseudo-code. (Note I think there is a slight flaw in the pseudo-code because you need to apply the transformation matrix to the mouse position, too.)

4
How can I improve my isometric tile-picking algorithm?