I am trying to get an object to slowly look at another object, that is, rotate slowly so its forward points towards the target position. Here is my code:

This results in the object looking kind of towards the target but never actually looking at it. I cannot for the life of me see my mistake. Can anyone help me? 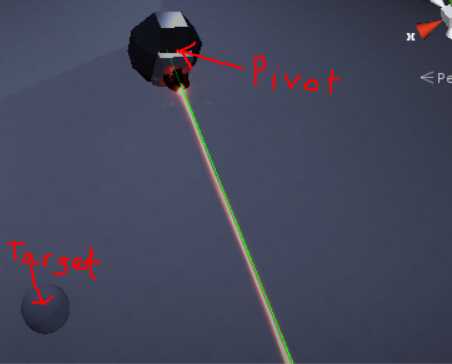 There are a few different issues here.

First, you're constructing toRotation as a relative rotation (some amount of change in rotation)

Imagine if we did this with position, starting with an object at x=8 that wants to move to x=10. The change in x is +2, but if we lerp toward that change value like so:

So, first we need to describe the destination orientation we want to have. It looks like you probably want something like this:

Then, if you want to rotate toward this location at a constant rate, as John Hamilton says, you can use the Quaternion.RotateTowards method:

Or, if you want the aim to be faster the further off-target it is, and gradually ease-in as it locks on, you can keep the exponential ease you were using before, but with the destination as calculated above, and correcting the time adjustment like so:

Any of the Lerp (linear interpolation) functions (Mathf, Vector3, Quaternion [ok, maybe quaternions don't apply since it's a matrix], etc.) works following this formula: P = P0 + (t * (P1 - P0)), 0 < t < 1, where, as the formula suggests, t which is time goes between 0 and 1. So what this function gives you is a point of a delta between two points multiplied by a normalized time.

What I do is to use coroutines to handle such interpolations, but since you are using an update, maybe you could try with Quaternion.LookRotation(Vector3 _direction), instead of using Quaternion.FromToRotation.

There's already a Unity built-in doing what you need to do. You shouldn't need to re-invent the wheel, unless you want it to do very specific things other than just rotating towards another game object. Example from the link:

Also, I suggest using Update() instead of FixedUpdate() for this kind of movement (well, Unity examples also seem to suggest that), since the time-step is usually faster in the Update() function, you should get a smoother movement overall.

Not the answer you're looking for? Browse other questions tagged unity c# rotation or ask your own question.

12
Why use Time.deltaTime in Lerping functions?

1
Creating a rotation offset based on camera position with XNA
0
XNA 2D rotation Matrix offset/origin
2
Why do I need to offset my aim rotation angle by 90 degrees?
1
How to completely stop the camera from clipping into the ground
1
Calculate heading required to turn ship so that its weapon can fire at target
0
Applying Y offset to rotation / position script
0
track 2D offset after rotation