Why use Time.deltaTime in Lerping functions?

To my understanding, a Lerp function interpolates between two values (a and b) using a third value (t) between 0 and 1. At t = 0, the value a is returned, at t = 1, the value b is returned. At 0.5 the value halfway between a and b is returned.

(The following picture is a smoothstep, usually a cubic interpolation) 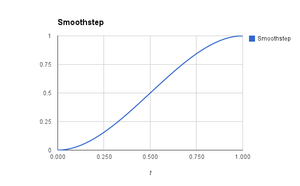 I thought to myself, "what a fool, he has no idea" but since it had 40+ upvotes I gave it a try and sure enough, it worked!

I got random values between 0.01 and 0.02 for t. Shouldn't the function interpolate accordingly? Why do these values stack? What is it about lerp that I do not understand?

There are two common ways to use Lerp:

1. Linear blending between a start and an end

This is the version you're probably most familiar with.

2. Exponential ease toward a target

Note that in this version the current value appears as both the output and an input. It displaces the start variable, so we're always starting from wherever we moved to on the last update. This is what gives this version of Lerp a memory from one frame to the next. From this moving starting point, we then then move a fraction of the distance toward the target dictated by a sharpness parameter.

This gives an "exponential ease-out" where the movement is fast when far from the target and gradually slows down as it approaches asymptotically (though with infinite-precision numbers it will never reach it in any finite number of updates - for our purposes it gets close enough). It's great for chasing a moving target value, or smoothing a noisy input using an "exponential moving average," usually using a very small sharpnessPerTick parameter like 0.1 or smaller.

But you're right, there is an error in the upvoted answer you link. It's not correcting for deltaTime the right way. This is a very common mistake when using this style of Lerp.

The first style of Lerp is linear, so we can linearly adjust the speed by multiplying by deltaTime:

But our exponential easing is non-linear, so just multiplying our sharpness parameter by deltaTime will not give the correct time correction. This will show up as a judder in the movement if our framerate fluctuates, or a change in the easing sharpness if you go from 30 to 60 consistently.

Here referenceFramerate is just a constant like 30 to keep the units for sharpness the same as we were using before correcting for time.

There's one other arguable error in that code, which is using Slerp - spherical linear interpolation is useful when we want an exactly consistent rate of rotation through the whole movement. But if we're going to be using a non-linear exponential ease anyway, Lerp will give an almost undistinguishable result and it's cheaper. ;) Quaternions lerp much better than matrices do, so this is usually a safe substitution.

I think the core concept missing would be in this scenario A is not fixed. A is updated with each step, by however much along the interpolation that Time.deltaTime is.

So, with A getting closer to B with each step, the total space of the interpolation changes with each Lerp/Slerp call. Without doing the actual math, I'd suspect that the effect is not the same as your Smoothstep graph, but is a cheap way to approximate a deceleration as A gets closer to B.

Also, this is frequently used because B may not be static either. Typical case might be a camera following a player. You want to avoid jerkiness, having the camera jump to a location or rotation.

You are right, the method Quaternion Slerp(Quaternion a, Quaternion b, float t) interpolates between a and b by the amount t. But watch the first value, it is not the start value.

Here the first value given to the method is the current object rotation transform.rotation. So for each frame it interpolate between the current rotation and the target rotation _lookRotation by the amount Time.deltaTime.

That is why it produce a smooth rotation.

Not the answer you're looking for? Browse other questions tagged unity mathematics interpolation lerp .

0
Why when using Mathf Lerp the speed is not changing according to Time.deltatime?
9
Best way to interpolate player movements in a very fast paced Unity game?
3
Finding average input value over time in seconds
3
How To Smoothly Animate From One Camera Position To Another
2
How can i check when Lerp has finished?
0
Moving panel between two positions smoothly?
1
How can I make a shader that will make a cube or any object invisible?
0
Using Lerp to zoom in on an object inside an if statement
0
Java LERP but with whole pixel values
0
Starting a Coroutine after another Coroutine ends
See more linked questions

2
GLM: Quaternion SLERP Interpolation
0
Lerp vs Vector math: one better than the other?
3
Fixed timestep and interpolation question
1
particle - interpolate
0
Texture2D.SetPixel method behaving weirdly in game province creation
3
Creating terraced terrain
3
How to completely stop the camera from clipping into the ground
1
How do I calculate to and from a Non-Linear Acceleration?
0
Deceleration via Lerping