So I'm trying to have my script pause an animation when the user clicks. Here's what I have so far:

I defined the animation up at the top

and then further down,

Code gives no error, however in Unity I have a GameController object to which this script is attached to. The gamecontroller object has a vacant field into which I drop my animation to. The issue is that when I try and drag and drop my animation or try to place it into that field, nothing happens, I keep getting the error down at the bottom saying that "The variable anim of GameController has not been assigned." How do I go about assigning myAnimation to the variable anim?

When I try and drag and drop my animation file to this, nothing happens. This is under the GameController script which I assigned to a GameController object.

First of all, you must clarify which animation you are talking about. 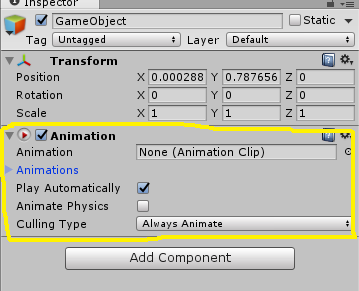 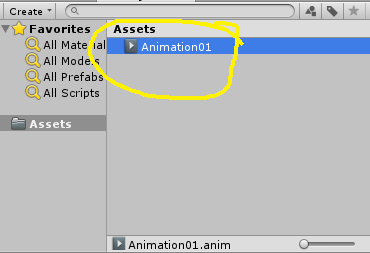 So if you are trying to drag-drop an animation clip into an Animation field, nothing will happed.

You have just run into the difference between declaration and definition of a variable. Just because you did this:

Does not mean that you're done! This variable currently holds the value null which means "nothing is here." Attempting to act upon a null object at runtime will cause the application to crash with a NullPointerException ("you tried to access something that doesn't exist").

In order to turn a declaration ("this is a variable") into a defined object ("this is a variable with a value") you need to assign something to it, either by using the assignment operator (=) or by using Unity's property inspector. What you assign this variable to, however, is entirely on you to figure out (you haven't supplied enough information about your project).

Not the answer you're looking for? Browse other questions tagged unity animation or ask your own question.

2
Programmatically creating sprite animations in Unity
1
Unity: Can't press space to unpause. Is this a Unity UI bug? Or maybe poorly written code?
1
Animator, gameObject position not being kept
0
Unity 5 Animation attaching
3
How to assign game objects to a script without dragging and dropping into inspector?
0
Unity can't add script component
0
Cannot access an animation from script
0
pass by reference a transformation
0
Animation via AnimatorController created in script does not play in Unity