Animator, gameObject position not being kept

Why does the animator reverses the gameobejct's position to its initial one, after the popout anim has been played?

In this video you can see the problem and what exaclty I'm doing.

I seen your video and it seems to me that your problem might be in Exit condition of the second animation. You need to have your logic set up like this :

Now after that, you need to realize that, you don't have two states in your animations, you have three.

So you will need not just two animation controllers, but three. Once you press toggle, it will run the transition animation, and then after that animation is over, it will switch to the Idle2 state. You won't need any conditions for the transition state, so you will keep everything you have, except you'll add the second state between them.

And I'm not done yet. Your transition state changes between the animations. So you will need another animation controller to go back to the other one. Your controllers should look something like this : 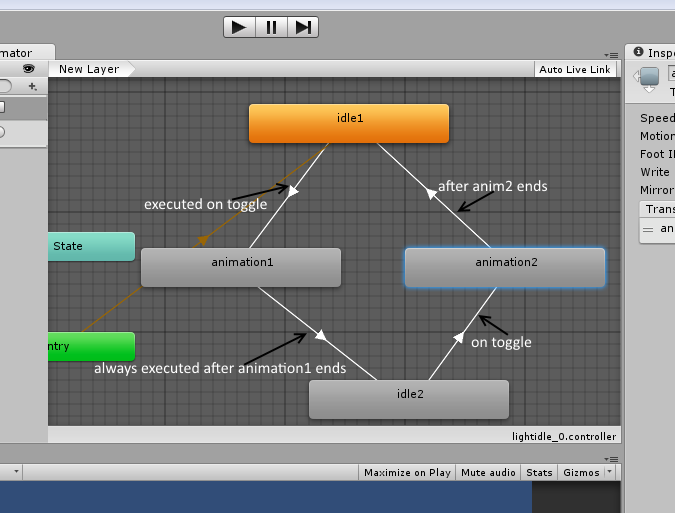 I hope you understand how animations work now. The best extra tip I can give you is to not use animators for basic translations. You see you will need to have 3 extra Animation states now. It's very unefficient. You can just script a boolean that will translate it to Y position when space is pressed, and translate it back to X position when space is pressed again. With only one idle animation that remains the same. Cheers.

Not the answer you're looking for? Browse other questions tagged unity animation or ask your own question.

3
Simultaneous Animation for a GameObject - Unity3D
0
What happens with associated animation clips when I copy a gameobject in Unity?
1
How can i access animation from animator in unity3D
1
Unity Animator default values overwriten
1
Does Animator.SetBool take precedence over Animator.SetTrigger in Unity's Animator?