Implementing a camera / viewport to a 2D game

What is the most practical way to implement camera/viewport to a 2D-game?

I've read, that I should store the object world position instead of position relative to the screen?

I have implemented a simple 2D-game where I load objects and levels from XML-files. Currently the level XML-file looks like this:

All objects have a 2d-vector "position" storing their current location on the screen.

What I want it to be: 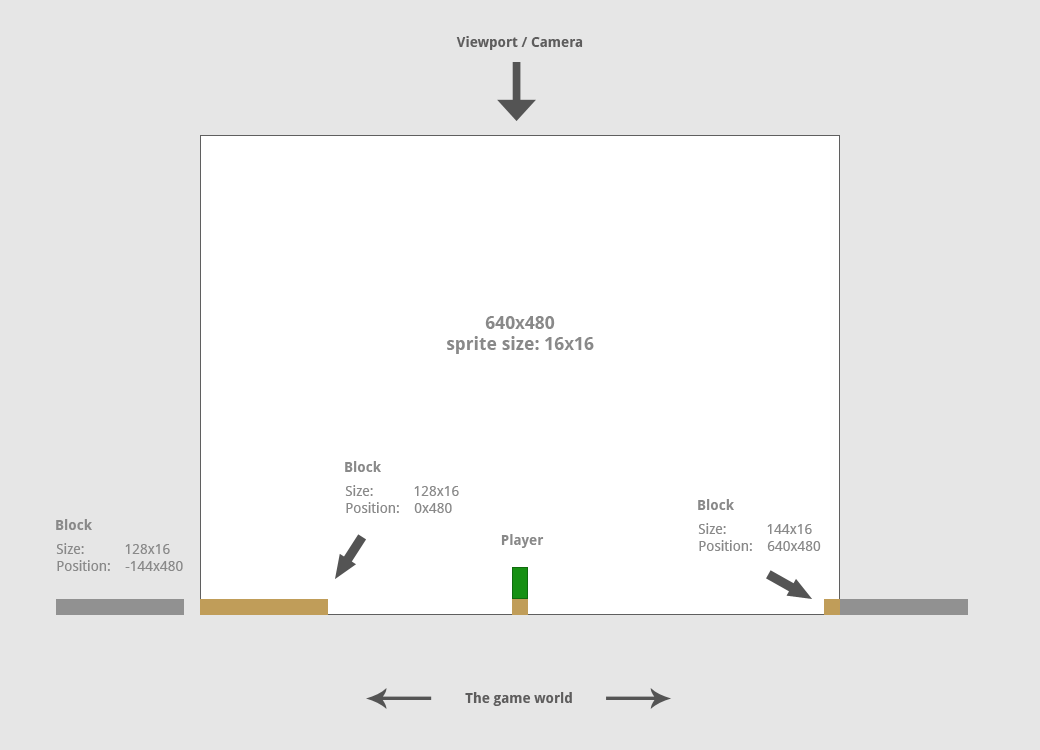 I'm asking pseudo examples / articles, but if you need to know what I'm using for the development: SDL & C/C++.

You need to have every object positioned relative to the world instead of the screen. Your camera should also have its own world coordinates so it can be drawn at a relative position in the world. It may also be convenient to have your camera follow an object, so wherever the object is, the camera just uses its coordinates. Typically the camera's coordinates will position it from the upper left corner. This means the camera would have a world position of approximately (0,24) in the picture.

Obviously some objects are not actually visible to the camera, so you may want to implement a view culling system.

It's best to do all of this in the GPU using the World and View matrices, not by modifying where you draw the objects on the CPU.

That way, you can change the camera arbitrarily (even zoom it in and out!) and it will just magically work. You can still do view culling as well to save on draw time. And none of your code for drawing the world will have to change after you've setup the view and world matrices correctly.

In SDL, you can probably just inline OpenGL calls such as glOrtho and glTranslate.

2
How to handle a Tile Map Scrolling
86
How do I create 2D water with dynamic waves?
1
How to manage maps in 2D MMO?
2
2d game view camera zoom, rotation & offset using 'Filter' / 'Shader' processing?
1
Can I use a translate function to implement a viewport?
1
Zooming in so a smaller portion of the game scene fills the entire screen
1
How to show part of the world scaled to screen size?

5
Zelda LttP (Super Nintendo) room changes?
2
Why does the player jitter when it moves between tiles?
3
Implementing a camera on HTML5 canvas?
0
Need transform matrix to translate the center of the view to a custom position within the target texture
1
Can I use a translate function to implement a viewport?
0
LibGDX - Move camera not working
0
Move camera while dragging with mouse