How does a subpass dependency guarantee the layout transition of a swapchain image happens after presentation engine finish reading the very image?

And I found something weired: 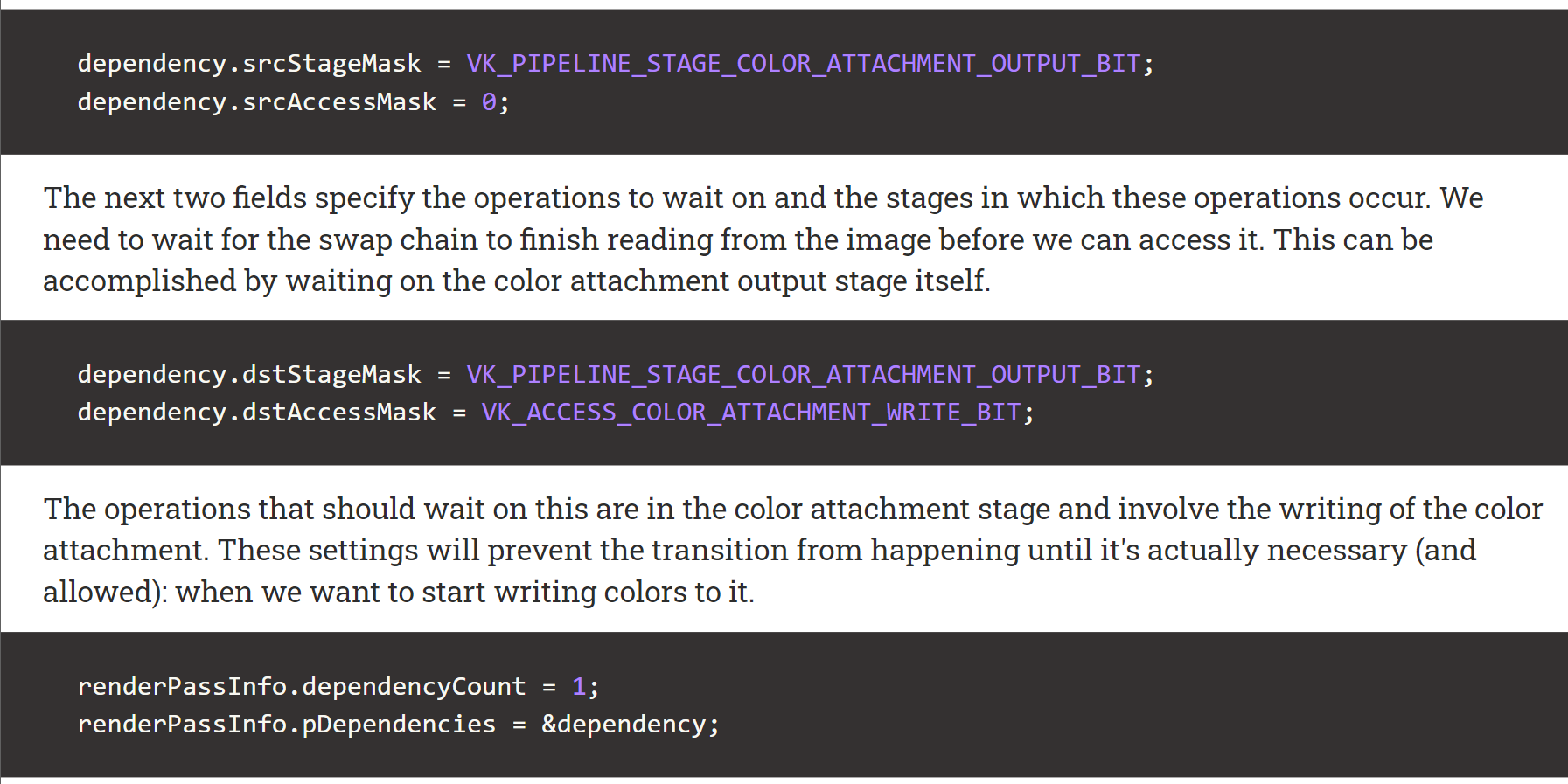 I did find some explanations on this topics from this blog:

External subpass dependencies Render passes in Vulkan have a concept of EXTERNAL subpass dependencies. This is arguably the most misunderstood aspect of Vulkan sync. I’d like to dedicate a section to this, because too many developers are lured into using it in cases where it’s not terribly useful and very likely to cause bugs.

The main purpose of external subpass dependencies is to deal with initialLayout and finalLayout of an attachment reference. If initialLayout != layout used in the first subpass, the render pass is forced to perform a layout transition.

If you don’t specify anything else, that layout transition will wait for nothing before it performs the transition. Or rather, the driver will inject a dummy subpass dependency for you with srcStageMask = TOP_OF_PIPE_BIT. This is not what you want since it’s almost certainly going to be a race condition. You can set up a subpass dependency with the appropriate srcStageMask and srcAcessMask. The external subpass dependency is basically just a vkCmdPipelineBarrier injected for you by the driver. The whole premise here is that it’s theoretically better to do it this way because the driver has more information, but this is questionable, at least on current hardware and drivers.

There is a very similar external subpass dependency setup for finalLayout. If finalLayout differs from the last use in a subpass, driver will transition into the final layout automatically. Here you get to change dstStageMask/dstAccessMask. If you do nothing here, you get BOTTOM_OF_PIPE/0, which can actually be just fine. A prime use case here is swapchain images which have finalLayout = PRESENT_SRC_KHR.

Essentially, you can ignore external subpass dependencies. Their added complexity give very little gain. Render pass compatibility rules also imply that if you change even minor things like which stages to wait for, you need to create new pipelines! This is dumb, and will hopefully be fixed at some point in the spec.

However, while the usefulness of external subpass dependencies is questionable, they have some convenient use cases I’d like to go over:

Automatically transitioning swapchain images Typically, swapchain images are always just used once per frame, and we can deal with all synchronization using external subpass dependencies. We want initialLayout = UNDEFINED, and finalLayout = PRESENT_SRC_KHR.

srcStageMask is COLOR_ATTACHMENT_OUTPUT which lets us link up with the swapchain acquire semaphore. For this case, we will need an external subpass dependency. For the finalLayout transition after the render pass, we are fine with BOTTOM_OF_PIPE being used. We’re going to use semaphores here anyways.

I also do this in Granite.

After days of struggling with spec,I found this stackoverflow post that perfectly solved my question:

Not the answer you're looking for? Browse other questions tagged vulkan or ask your own question.