I am developing a 2D run 'n' gun game in Unity and am having an issue getting the aiming to "feel right".

For digital input like a keyboard or D-pad, aiming is pretty easy. I do it with conditionals like

But I have yet to find a satisfying way to deal w/ analog input from the thumbstick, should the player be using that instead of the D-pad.

The first thing I tried was a naïve implementation where I treated crossing various deadzone thresholds as, essentially, digital button presses, and then used conditionals like the above to set the aim (I'm using the popular Rewired extension to handle input in Unity, which makes this a breeze).

But even permuting all the different parameters in Rewired (for example, deadzone threshold, radial deadzone versus axial deadzone, sensitivity, and so on), I couldn't find a configuration that "felt good".

Either aiming w/ the joystick felt sluggish and unresponsive, or was too sensitive so that it was easy to accidentally shoot diagonally when you wanted to shoot forward. Some permutations felt better than others for aiming, but resulted in character movement itself feeling slugging (since any deadzones set on the thumbstick for aiming are also used for movement of the character left and right).

The second thing I tried was polling the thumbstick in my code to get its current position. If the length of the vector is above some custom deadzone I specify (say, 0.3), I aim according to the angle that vector makes with Vector2.right, looking at which sector of the unit circle the angle falls in (where there are 8 sectors, each spanning 45 degrees)

You get the idea.

So the next think I did was started studying run 'n' guns like Mummy Demastered, Blazing Chrome, and Valfaris (all games whose game feel I am trying to emulate). Then I noticed that it seems like they are doing something a bit more nuanced than just mapping thumbstick angle to equivalently-sized sectors of the unit circle.

For example, in Mummy Demastered, if you push the thumbstick directly up, once you pass the deadzone, the player will first aim diagonal up, then straight up, suggesting aiming in these directions is entirely based on the vertical component of the axis, rather than both vertical and horizontal. Aiming down, however, does not work like this in the game.

As another example, in Blazing Chrome & Valfaris, it seems like the sector for aiming diagonal up is not simply -22.5 to -67.5. It seems to start later than you'd expect, closer to -45, and extends closed to -90. The sector for aiming directly up actually feels quite small. And this feels good in game.

Similarly, the sector for aiming diagonal down starts earlier than you might expect, and this also feels good.

My question is not whether these games are actually using these techniques (I know that's off topic), but rather, What are the different techniques you can use for implementing 8-way aiming in a 2D sidescrolling run 'n' gun (are there other nuanced techniques like those I think I've identified above)?

And what are efficient ways of actually implementing those techniques? (For example, I am currently using inequalities to capture the notion of sectors of a unit circle, when I'd like a more flexible representation that would allow me to easily tweak sector sizes as I balance the game feel)

I would suggest making a visual representation of what your joystick or D-pad is doing, so you can "see" your different input strategies. You could make a plane that lights up in segments in front, to the side, to the rear, when you use the joystick (or D-pad).

I made an illustration with colored squares, you could light them up based on input. In the code, when you detect joystick movement you can change the colors by calling the object's material renderer. 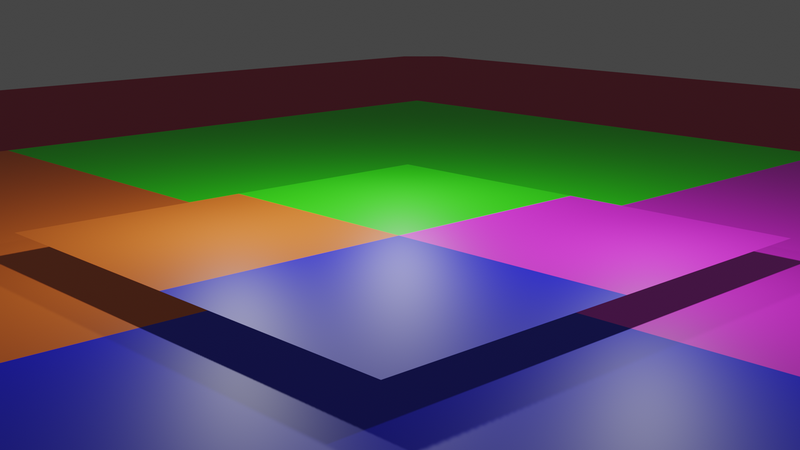 If you move the joystick "Up", and the value crosses your threshold, light up the square in front. Or move "Left", and see how far left you have to get to light up the left square.

My thinking is that when you see the sections light up as you move the stick, you can see the results of your calculations.

Also, if you take your threshold values and make them public, they will show up as sliders in the editor, and you can tweak them easily as you run tests.

Not the answer you're looking for? Browse other questions tagged unity c# 2d input side-scroller .

2
Adjust Keyboard input to match look direction?
4
What makes movement feel smooth, and what are some standard methods to achieve this?
14
Why is forward=down mouse orientation commonly called "inverted"?
0
Ship Controls modeling Real life Physics
3
How do I get diagonal 3d movement when two buttons are pressed?
3
how to achieve smooth 360 Degree input with joystick as opposed to 8 angles
0
First Person Shooter Character in Unity - Meshes Clipping When Close to Body?