I am following the tutorial from learnopengl.com but it uses a Y-up system, but I would like to change it for a Z up system because I'm more used to it.

I tried changing the up vector to be 1.0 on the last coordinate but and inverting the pitch And the Yaw, but when having the camera face the positive y-axis the mouse movement breaks and starts to move slower and opposite to the way I move the mouse. 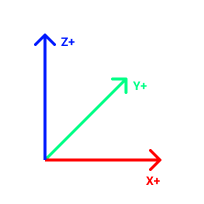 That is the same as the Blender one.

This is the function of the camera class which handles the Pitch and Yaw: (offset is the mouse movement on the x axis and y axis):

Are there any resources available online that explain how to make the switch from a Y-up to Z-up system?

Here O means orientation, the index oc means "OpenGL in Camera" and R_x is the rotation matrix that represents a rotation around the x-axis. Note that our orientation is a matrix!

Now you need to know, how your camera coordinate system is oriented in the "world space" system. If you define that both systems have the same orientation if yaw=0 and pitch=0, your camera systems orientation in world space can be described by the 2 following rotations in matrix notation:

Keep in mind, that you read matrix multiplication from right to left. So you apply the pitch first by rotating around the x-axis. Afterward, you apply the yaw. Order matters, so don't exchange them.

Now you have all information together, but there is still one problem. The system dependencies are wrong. You want to transform your data from world space to "OpenGL" space. This means you need the matrix:

This is the matrix, that transforms the orientations from world space to "OpenGL" space. Its rows are your Front, Right and Up vectors. I am not sure about the ordering since I didn't check it explicitly, but I think the second row is the Front vector, the first is Right and the last is Up. You can try to extract them, but since you need to bundle them into the same matrix later, I would say, don't do it. Keep using the matrix instead.

However, there are still some things to consider: translations. To get to the actual camera position, you need to translate your data. A quick look into the tutorial (the one you linked) just revealed that this is already explained there, so I won't repeat the derivation again. Your full transformation matrix from world to "OpenGL" space is then:

I am actually using this approach myself. Therefore I know that it works ;). You can still optimize it a little by performing the matrix multiplications by hand, but since you are doing it once per frame, it isn't too important for performance.

2
Why doesn't the y Axis work with SuperBible frame reference or GluLookAt
4
Camera rotation - First Person Camera using GLM
2
OpenGL Arc-Ball Camera Yaw Pitch GLM::Rotate
1
Getting the Right Vector from the Forward Vector
0
Wierd behaviour upon limiting rotation on Y-axis
3
How do I change quaternion rotation to use the local camera axis rather than the world axis in DirectX 11?
0
Why does the pitch affect the x component of the front vector?
1
Camera movement issue with pitch and yaw angles
2
Camera view matrix from position/yaw/pitch/worldUp
2
C++ Mouse picking for ray to plane intersection