What is the difference between AR, VR and MR?

Please explain clearly and in short about the differences and boundaries between AR, VR & MR.

Virtual Reality: where the user is completely ŌĆśimmersedŌĆÖ in a virtual environment. Nothing of the outside world is visible.

Mixed Reality: a combination of the above where the user sees the real world, but virtual objects are placed in this world (often anchored) as if these were real. These virtual objects have the illusion of being part of the real world and can be interacted with. At a higher level, a virtual lightswitch could for example control real lights: therefore ŌĆśmixedŌĆÖ reality.

Virtual Reality and Augmented Reality actually exist on a spectrum, so the definition between them can get blurry. The distinction right now is mostly driven by hardware.

The easiest factor to determine the difference today is immersion. How much of the user's experience is virtual content? At one end of the spectrum is an entirely virtual world. At the other end is the physical world.

Microsoft's name for this spectrum is "Mixed Reality".

Where physical space is on one end, containing AR experiences. The other end is virtual space, where VR experiences happen. This is why Microsoft calls their VR headsets "Mixed Reality" headsets, with a further classification of "Immersive devices".

Others will define the gap between AR and VR as MR, and the entire spectrum as XR (either as Extended Reality or where X is a variable replacement for A,V,M): 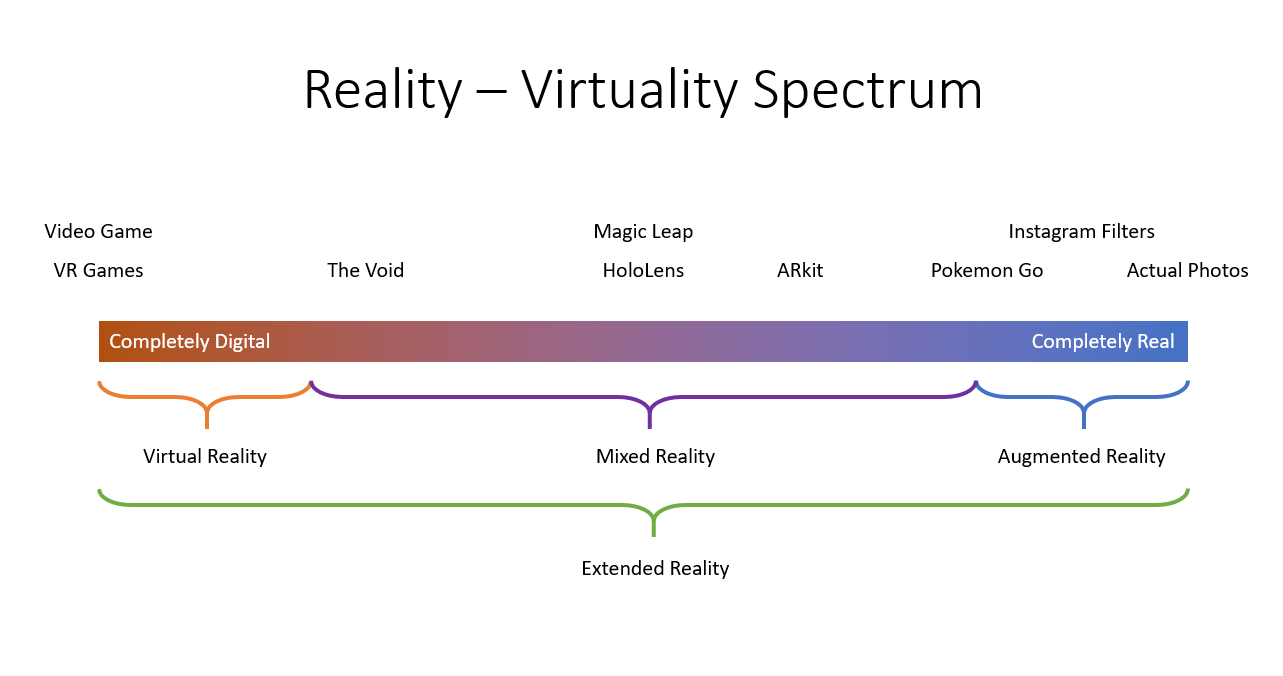 At the moment, spatial understanding is less important for VR devices, other than for automatically setting boundaries, so the user doesn't walk into a wall or other physical obstacle when in VR. It's much more important for AR devices like HoloLens or Magic Leap, to know how virtual objects should be occluded or where flat surfaces are for dynamic content.

At some point in the future, there will be a device that can span this entire spectrum. But right now we're hardware limited to multiple devices to cover just tiny parts of the entire spectrum.

According to Peter Patterson (XR Architect / Developer), Unity officially stands by the Consumer Technology Association definition of the terms which read as follows.

Mixed Reality is an experience that seamlessly blends the users real-world environment and digitally created content where both environments can coexist and interact with each other. For instances, Jaron Lanier defines Pok├®mon GO as the heart of mixed reality.

According to Milgram et al.

Augmented Reality: a form of virtual reality where the participant's head-mounted display is transparent, allowing a clear view of the real world.

Mixed Reality: when real world and virtual world objects are presented together within a single display, that is, anywhere between the extrema of the RV continuum.

According to Kassahun et al.

Virtual Reality: aims at enhancing our presence and interaction with a computer-generated environment without a means to interact with or see the real world.

Not the answer you're looking for? Browse other questions tagged terminology virtual-reality augmented-reality .