Can I build cross platform executables with Unity?

If I create a C# console application in Monodevelop and build it I can run it by typing:

or using Wine. (I am using Ubuntu Linux)

I assume that this means that C# .exe files are cross-platform.

If so can I build a cross-platform Unity executable?

Here is this program:

When I build it I get this: 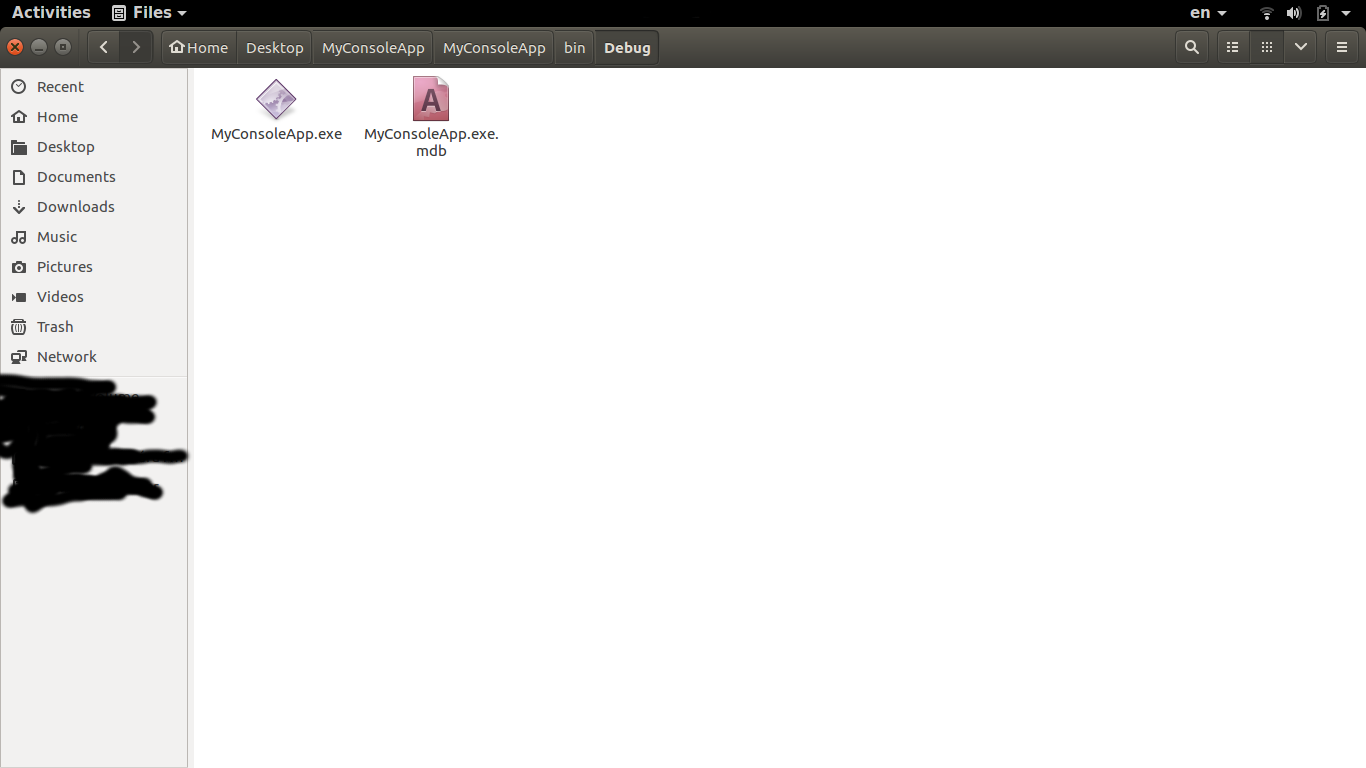 I can either run this file (MyConsoleApp.exe) by double clicking it which will open it in Wine: 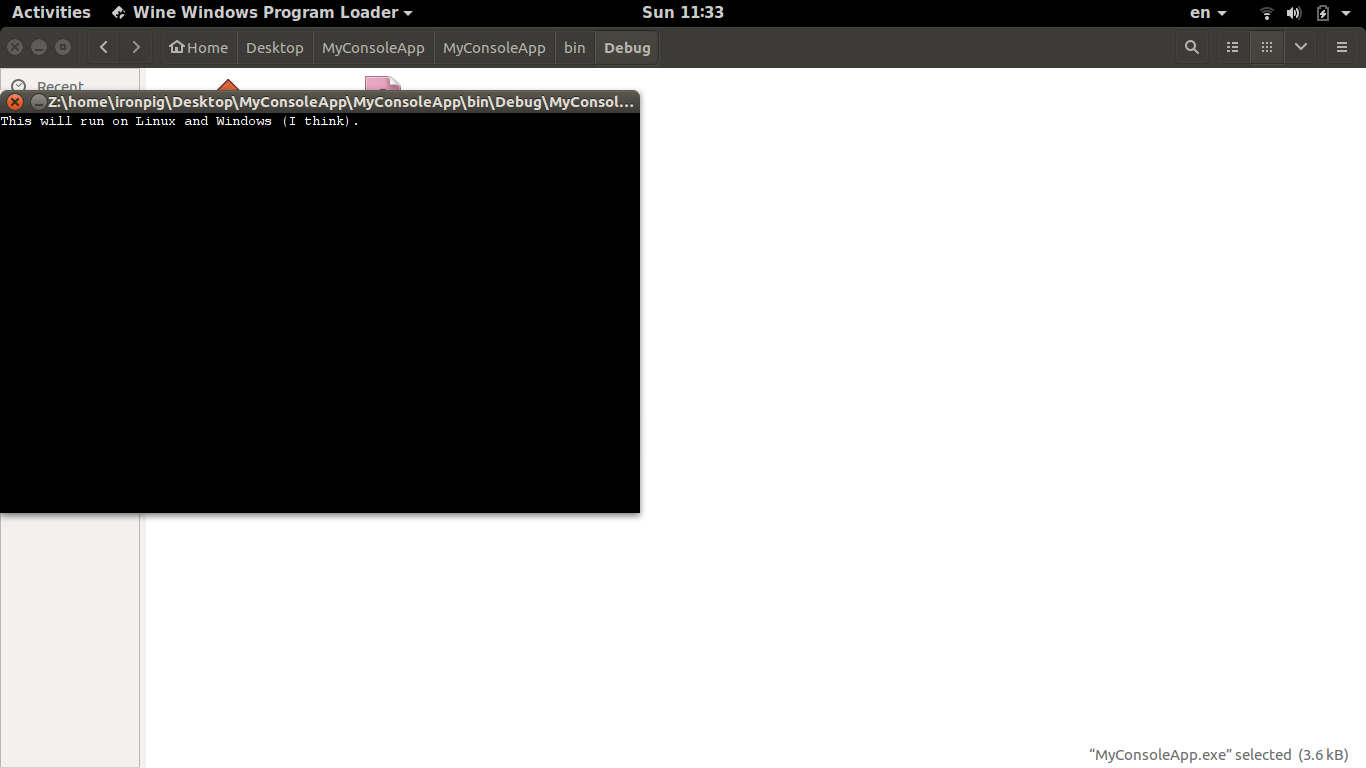 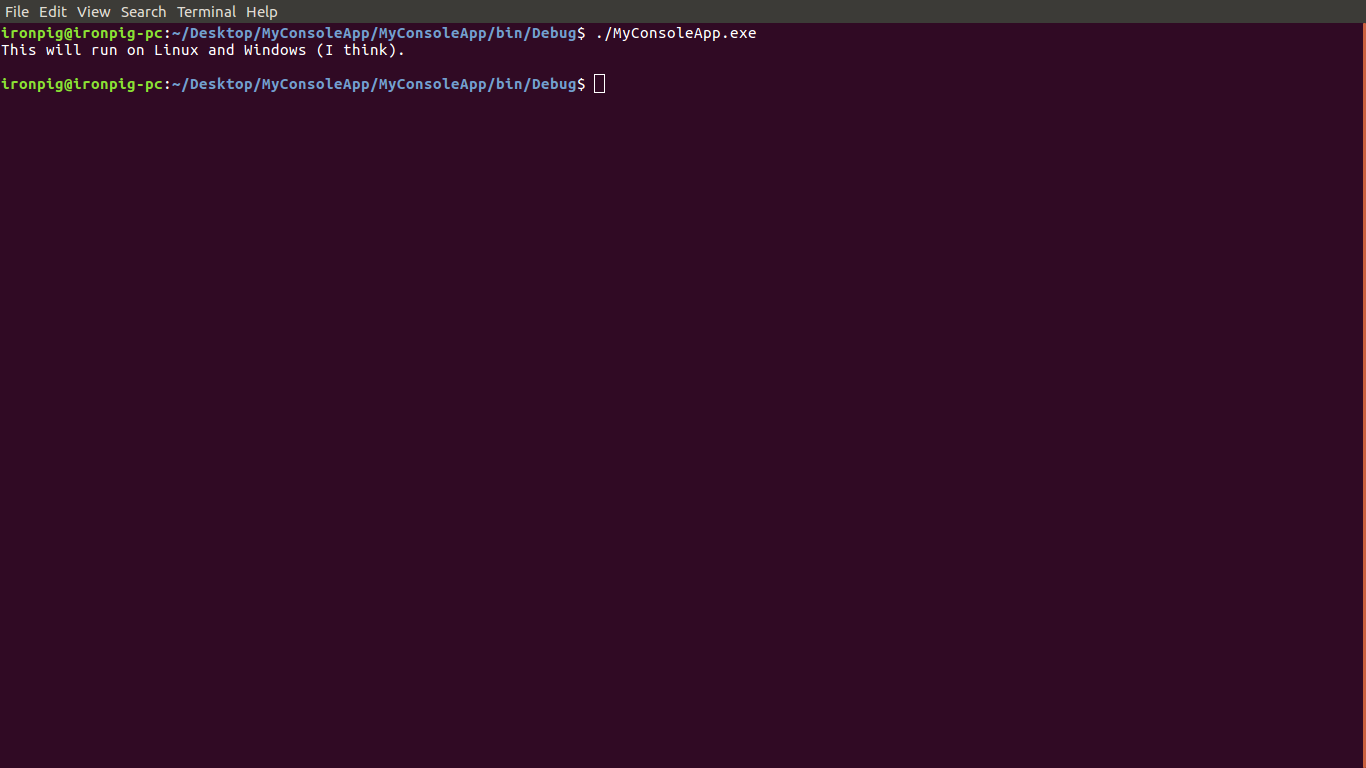 First of all you seem very confused. There is no way to create an executable file that can run on different platforms. If you read about Wine on their website, you'll find this:

"Wine (originally an acronym for "Wine Is Not an Emulator") is a compatibility layer capable of running Windows applications on several POSIX-compliant operating systems, such as Linux, macOS, & BSD. Instead of simulating internal Windows logic like a virtual machine or emulator, Wine TRANSLATES Windows API calls into POSIX calls on-the-fly"

So what wine does is translating the Windows API into Posix calls.

"I assume the C# .exe files are cross platform" No, they aren't. That's why different operating systems have different types of executable:

"If so can i build cross platform executables?" If you mean building a project in Unity and export it to different platforms then yes, you can. But you can't run natively an .exe file on an Os that is not Windows.

I think the actual answer you are looking for is "sort of ... in a way". The way that C# works is less like normal (native) executables that you would run on your Linux or windows machine, and more like Java. With normal executables, your compiler compiles the code and produces a native executable, and then your OS loads that executable and runs it. However, in C#, you compile to CLI (common language infrastructure) code, then your Common Language Runtime (mono on linux, .net on windows) loads that code, and compiles the parts that it needs while it is running (JIT compilation).

So the platform dependent parts are taken care of by either mono or .net when you run the executable. The reason you can run the executable in linux using ./myprog.exe instead of mono myprog.exe is because the linux kernel has a feature called misc-executables, which basically sees that you are running a c# program and instead of trying to load non-native code, it loads an interpreter program (mono or wine depending on you your system is configured).

So I say that it is "sort of" cross platform because the native code is still platform dependent. But a c# application is not native code, so it actually can't run directly on any system (it will not run on my computer because I have neither wine nor mono installed). However, as long as a good enough CLR (common language runtime) implementation exists on the system, it should work. So it is cross platform in the sense that it can run on any CLR platform (because the CLR what does the loading and executing, NOT the OS).

Additionally, don't be confused by the program's extension (.exe), this does not denote the type of the file. People often see .exe and assume that means its a windows executable (PE executable), but in this case that is not true, its a CLI executable. Under linux, the extension is basically meaningless, linux (almost) completely ignores it. Linux determines if a program is an executable or not based on the executable flag in the file attributes. Most Linux native executables (ELF executables) do not have any extension. I believe though that (depending on how your system is configured), linux's misc-executable system might use the extension to determine that wine or mono is needed to execute your C# application.

Not the answer you're looking for? Browse other questions tagged unity c# windows linux or ask your own question.

8
Architectural approaches to creating a game menu/shell overlay on PC/Linux?
1
Unity3d generating a file in iOS and saving it on a linux machine
1
Unity can't build AssetBundle for iOS
2
How do game engines like Unity and Game Maker exports to other platforms?
0
Publish to folder equivalent for a desktop GL project with visual studio Mac 2019