How can I add a satisfying objective and/or win condition to a game with respawns?

I am looking to add an objective to my game.

The above video is the most recent video I've made of gameplay in my game. As you can see, the game has got:

On the surface, this looks fine. There appears to be everything needed for a game. However, I have a problem with a win condition, and an overall objective. Let me explain:

The map is divided into squares. Each tower controls a square. To take over a tower you must destroy it - Once "destroyed", the tower switches team and regains all of it's health.

The problem is when a team starts losing. Let's say that the map is like this: 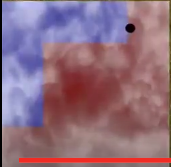 (Ignore the red line in the picture) 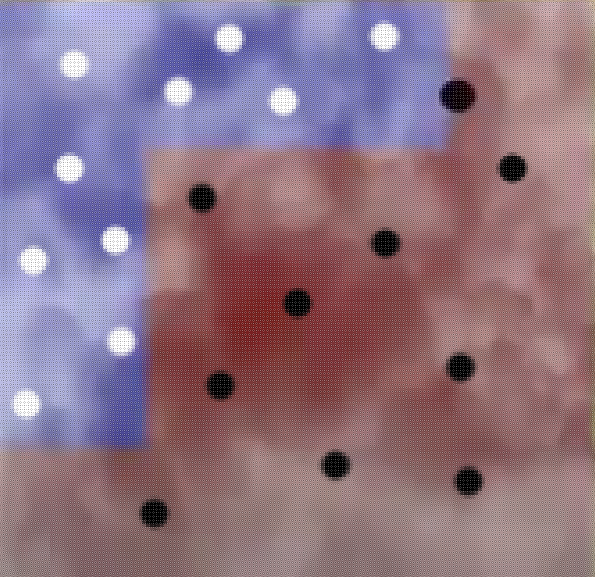 With the black dots representing members of the red team, and the white dots representing members of the blue team (both teams have 10 members in this example), you can see clearly how the blue team can never be defeated. Any member of the red team is simply ganged up on, overwhelmed, and then respawns really far from the fight. Yes, theoretically in that example one or two of the territories could be taken. But then the problem just gets worse. Imagine this example if the blue team only has one territory.

This isn't just theoretical, by the way. I've actually left the server and the AI tanks battling for over 3 hours and no team was able to win.

So to summarize the problem:

When a team controls less territory, there are more members of that team per piece of territory they own, and so there is no way that the opposing team can ever win.

One solution would be to remove respawning entirely. This would mean that:

I could also make each tower taken give the team more power (for example more health the more towers they have). This:

I could also make towers simply be permanently destroyed, rather than having them take over the other team. However, this then creates a permanently equal match. 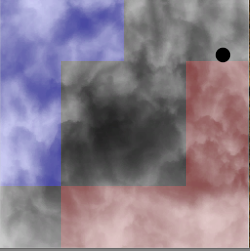 I could limit the respawns, or have a respawn timer. However obviously,

I could leave the game how it is! I could add progression in a shop and buying skills. However,

In short, I've done a lot of experimentation with this and thought a lot about it, however there appears to be no clear answer.

And, even if a team takes all the towers and wins, what then!? The map just resets, and the battle starts again? This would be repetitive, and boring.

My game needs an objective system which is fulfilling, which allows one team to win, but to not make that victory worthless, and which allows both teams to have a long and enjoyable battle.

The winning condition is to capture all the towers and control the entire map.

Each tower has its own respawn timer so the players will only have to wait in 2 situations:

How this works remains completly on the balance of the timers and how many tiles a team need to lose before timers matter. So this first "wait to respawn" should translate into "ok, or we turn that now or we are doomed"

Each tower acts as a "healing beacon" and the healing splits between players. The more players in one area the less they individually heal.

Edit: Additionally, consider adding a "wipe-out respawn" if all players in a team die they all have to wait n-seconds. That is intended to give a cornered team a chance to make a "comeback", regain territory and turn the match around.

A quite typical solution for "control" maps is this: game win condition is achieving a certain amount of points, with points being received regularly based on the number of towers/amount of territory under control. Optionally, if you make the relation between towers controlled and points gained non-linear, you can tweak the unpredictability of the end result as you see fit.

If a simple "point" game is too boring for you, you can make those points a sort of a currency, rather than the win condition. Make it so you can activate a powerful (but temporary and one-shot) power-up or ability for a certain amount of points. Then, on the one hand, the weaker side still generally enjoys numerical superiority to make it easier to push back and return in the game. On the other hand, the winning team can get the momentum required to finish off tightly respawning enemies.

Controlling territory, killing turrets, killing players, etc. Some or all of these could generate differing numbers of victory points. Collect enough victory points, and you win.

The game becomes a drag when it runs long, so impose a time limit:

I offer Team Fortress 2's design choice for the analogous mode, capture point; there are 5 points on a symmetrical map, with 1 in the middle. Each team starts controlling the two closer to their base, with the middle one neutral. You capture points by standing on them without enemies standing there. The points are in a line, it's a tug-of-war kind of deal, and you can only capture the enemy's point closest to you.

Your spawn points move up as you capture points to ensure the team with advantage can actually reach the fight in a timely manner, but the losing team always spawns closer to the main "conflict zone". The final capture point is right next to their spawn. How is this gamestate resolved?

Points that are further from the center get captured faster. The final point is captured in 2 or so seconds, compared to the 30 it takes to get the middle one. Consider something similar! Towers have more health if you control more of the map, meaning that having more map control makes defending a little easier, and speeding up the game once one team has obviously been put in a losing spot.

In the spirit in keeping constant action as one of the games design goals, I would consider adding secondary objectives. These objectives would not technically be necessary to win the game, however they would provide a large bonus that would greatly aid the attacking team and allow them to finish the game.

For example, certain towers (either deep in the defensive territory or in a sort of "side-quest" area) could provide debuffs to the respawns of the defending team. Some ideas I was toying with were:

You could also have a neutral "mini-boss" in the middle of the map that gives a huge combat bonus. Depending on the difficulty of the boss, fighting him would risk allowing the other team to come back, kill your team, and steal the objective. This sort of objective would create the play-style of pushing deep enough into the enemy base to give you the time and space to retreat to the boss and take him safely.

You could designate the top left/bottom right corners as spawn zones, with no towers. That way, tanks that re-spawn need to travel towards towers to defend, giving the other team an opportunity to get some shots in on the tower before the defenders reach them.

That system is more like Battlefield 1's multiplayer mode Rush, which is probably a good indication of it being a good system; if a major publisher uses it in a game that is very critically acclaimed, chances are it's at least usable. The only difference is in Rush there is 1 attacking team and 1 defending team, and the attackers have a limited number of lives to destroy all objectives. That provides a time limit without actually having a temporal time limit, which I usually don't like, but may be necessary to stop a game.

You could award points only for team kills (or devise other methods not related to tower destruction, like killing the last enemy inside of a square to 'clear the zone' or something), to give the game a multi-faceted approach for winning. Players will have to devise strategy. It won't make players too cautious, either, because they'll need points to win if they don't capture all the objectives!

UT2004 onslaught mode tackled this in the following ways:

Have you played Star Wars Battlefront 1 or 2? Those have endless respawning (sort of), and taking of territory, but they have several things your game doesn't. You could try any or all of these.

1) A total troop limit. Each team has, for example, 500 total soldiers, and each spawn decreases that number by one. So, eventually one team will run out of people, but the human players won't need to wait around if they run out of lives, because they can draw from the shared pool of soldiers.

2) Each "territory" allows the owning troops to spawn there. So, in your example, as red takes more towers, red tanks can spawn at those towers, keeping red tanks closer to the front lines.

You could allow players on the winning side to respawn in regions close to the remaining towers to be captured. This would allow the winning side to also enjoy the benefit of having all of its players spawn in close to the action and would eliminate the frustration of having to trek across the map, unable to do anything important, between respawns.

1
How much is too much?
2
Calculation of a fight with many entities
5
Colors for villains, good guys and neutrals
0
Game Design: Colour units per team or per unit type?
2
Balancing players between air/land fields in a PvP match
2
How can I dissuade alliances?
3
Multiplayer game, design of server <-> client communication
7
Help resolve territory acquisition design difference of opinion in MMO RTS
5
How to avoid a boring late game in strategy games while still keeping victories satisfying?
7
What colour space or mixing algorithm should I use for "watercolor-like" colour mixing in-game?