So I'm using Farseer to create an immovable object:

This way, when I instantiate things, I can visualize them as screen coordinates, which should hopefully keep me sane during all this! Theoretically (especially as these objects don't move), these two coordinate pairs should be in the same spot (or off by a maximum of one pixel if I'm truncating floats to an int somewhere).

However, for some reason, my rectangles are being offset by ~25 pixels up and to the left. Here's a screenshot: 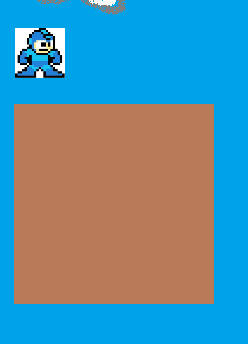 You can see that he has "landed" just above where the rectangle is being drawn. I can float around the box to explore where the physics engine believes it is, and I find that it's up and left about 25 pixels.

Any ideas on what could be causing this?

For starters you should use another overload of Draw, the one that takes a Vector2 position and a Vector2 origin, and set the origin to be new Vector2(width/2, height/2). The one you're using is only really useful when you want to directly specify a sprite size.

Not the answer you're looking for? Browse other questions tagged c# xna 2d farseer-physics-engine or ask your own question.

0
Farseer: ApplyForce problem
6
Correct way to use Farseer Physics in XNA
0
Farseer: How can I calculate the needed velocity in this case?
2
Why is BayazitDecomposer inaccessible when upgrading from Farseer 3.3.1 to Farseer 3.5?
4
Odd Behaviour XNA Game Component
2
Drawing Farseer Fixtures