A pastebin to the pastebin links(I still have the 2 link cap):

Basically you want to have a range around your camera. When chunks come into this range, you load/generate them. When chunks leave this range, you save/unload. Keep in mind you'll want to keep the loaded range larger than the visible range, so your chunk loading isn't seen.

At the moment it looks like you're storing your chunks in a dictionary. That's kind of a strange choice, and it may be a little more work for you to maintain your chunks with that data structure.

It looks like you've got a lot of the functions you need already, nice work. You'll want a list of chunk positions that should be loaded, your loaded list. Your update loop is going to maintain that list. As the camera moves, you update the list to include all the chunks in the range of the camera.

This is where the dictionary choice is a little strange. Essentially you'd have to loop through all your dictionary entries, unload the chunks that aren't in your loaded list and load the ones that aren't in your dictionary but are in your loaded list. The alternative is to have some sort of linked list structure. Where you can add/remove chunks from either end. This does get a little tricky when dealing with 2D linked lists, but I think you can make it work.

Starting with this scenario, where the red dot is the camera, moving in the X plus direction. All the grid squares (chunks) touching the green area are currently loaded. 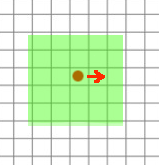 Then the camera moves far enough to get some new chunks: 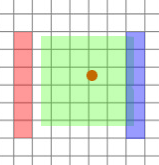 As for maintaining the list, you can update whenever the camera moves past a chunk boundary. Like if it moves past the X plus boundary of the chunk it's currently over, like in the example above, the chunks to be added or removed from the list could be found like this:

Where GetChunkRootPositionAt converts a world position into the root position of the chunk that contains that location. And the LoadedList functions take a Vector2 to add/remove from the loaded list.

Finally, you may find adding in a buffer for unloading could be nice. If someone is moving the camera around a lot right on a chunk boundary, you can save a lot of loading/unloading by just keeping it loaded. Essentially, you may find that unloading at the same time as loading isn't necessarily the best option.

Find out how large your screen is and only render tiles that fall within that range. You might need a camera object to keep track of this data and some sort of x & y offset variables to keep track of movement around the world.

Not the answer you're looking for? Browse other questions tagged c# xna xna-4.0 tiles or ask your own question.

47
Managing text-maps in a 2D array on to be painted on HTML5 Canvas
17
How does one save a procedural world?
0
Character movement on a 2D tile map
2
How to store “chunks” of tiles or How to make my implementation work

9
Finding unoccluded tiles in tile-based game
6
How do i create bounding boxes with XNA 4.0?
2
2d very large tile based game, zoom and pan considerations
22
How can I create a random “world” in a tile engine?
2
Questions about dynamic loading and unloading of assets and game state
0
World Location issues with camera and particle
1
viewing fbx files in windows via xna 4.0
1
Drawing Transparency in XNA 4.0
3
How do I efficiently manage a tile-based map with items and characters?
0
How would you go about placing objects between chunks in a 2D game?