In Unity we can use the Attribute [SerializeField] to expose private fields to the Unity inspector like so:

To understand what I mean by "expose" I meant having it show up in the inspector like this: 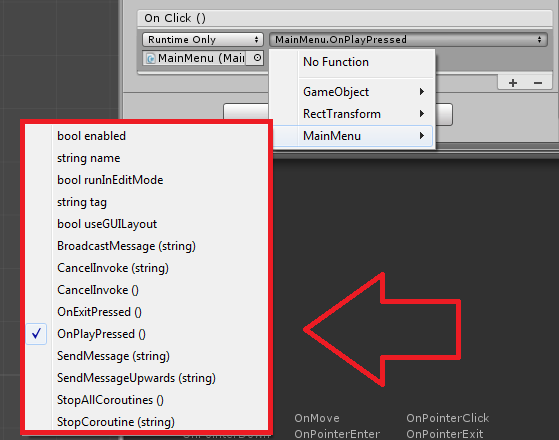 The reason I want this functionality is because I just encountered a bug where I was calling a public method from a script that was just meant to be called as a callback to the OnClick method. Pretty much the same reasoning as wanting to use [SerializeField] to hide variables but expose them to the inspector.

Private methods can't be exposed to the editor. Your goal her is to have another script invoke the method, and the only way to do that (and in fact the only thing that even makes sense) is for that method to be public.

Technically speaking, you could invoke private methods via Reflection, but this is a performance nightmare and is not recommended. As such, the Unity Editor doesn't allow private methods to be the target for invocation in this manner.

Alternatively, you can allow buttons to invoke private methods by assining the Onclick behavior via code:

This topic seems to be very old, but since I stumbled upon the same issue and found this topic, here is my solution.

In nutshell, for every Unity component that exposes "Unity-only" methods you make two classes:

The downside of this approach is that you cannot declare the main class sealed. But it's tolerable. Not that many people use it anyway.

HINT. Using "debug" mode in Unity inspector you can easily replace the main class by its decorator.

HINT2. To enable debug mode in the editor, right click on the inspector tab title.

You seem to have a misconception about how accessibility-levels work in C# (or programming in general). An element marked private cannot be accessed outside of the class it's declared in, by definition.

The reason you are able to expose fields is because the editor is not working with the actual run-time instance, but rather with a serialized copy that the editor will substitute with an instance when the time is right. Fields are serializable, and serialized types that have a Drawer show up in the inspector, so when you override Unity's default behavior using the [SerializeField], and the protected/internal/private field gets serialized, it will show up in the inspector. It's more of a consequence of how the system works, rather than actually "exposing a private field" as if it was a concrete action that could be taken.

Methods are not serializable. Methods aren't data; they are procedures. It makes no sense to serialize a definition of "how to do something". Definitions are the responsibility of the classes/assembly. --- This is also the reason why you can't deserialize data without access to the assemblies that define it. The compiler is not clairvoyant; it needs to know the format that the data is supposed to be in, in order to reassemble the data back into a concrete instance.

4
What's the point of [HiddenInInspector] (as opposite to [NonSerialized])?
2
How do I draw lines to a custom inspector?
3
Get type of the object where attribute was declared - Hide In Derived Inspector Attribute
0
Elegantly exposing properties in Unity inspector
0
Unity Destroy Unused GameObjects
38
Should I avoid using object inheritance as possible to develop a game?
0
How to pass an argument with ref keyword to a local funtion/ how to work around it?
2
Why doesn't Unity use properties from C# scripts instead of fields?