How can I simulate thousands of things at high frame-rates?

I'm working on a simulation game like SimTower where I'd like to keep track of thousands of items at once. 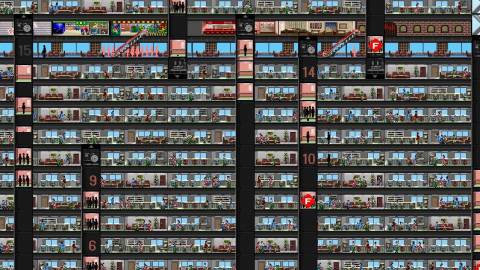 How can I realistically keep track of each individual person/room/elevator in the game? I assume I can only render what's on the screen, but how can I afford to constantly simulate everything that is off the screen?

Thousands of things probably isn't that big of deal. As you note, even older games like SimTower could do this pretty reasonably. Consequently the first thing I'd suggest you do is the simple, straightforward option:

Once you've done that, if your game still runs acceptably, then you're done. If it doesn't, or if it starts to slow down, profile the game to make sure you're actually bottlenecking on entity simulation code. If you aren't, solve that problem instead.

But after all that, if you are bottlenecking on entity simulation, there are some techniques you can employ.

All of these methods have pros and cons, and must be adapted to your specific scenario and the needs of your game. You may need to employ all of these methods, or maybe none, or maybe you can select a few that work best for the profiling data you've gathered.

One last piece of advice is to start your simulation relatively simple. You may be surprised as how complex simple simulations can end up looking in practice once you introduce sufficient scale and some basic randomization. You may be surprised to discover much of the "complicated" simulation you think is going on in SimTower and similar games really isn't all that complicated and ends up being quite trivial for a modern machine to perform at scale.

Almost every game fakes what ever it can get away with. The important thing is the impression of actual people going about their day. I would not do anything with the offscreen action. Instead when the player scrolls to a different location, I would spawn the people at random location but with some probability to where they were last time the player saw them. The same way should be done with what the people are doing. If this is done correctly and used together with the time of day, what the people has done allready in the day, what they prefer to do and other ideas you might have, it can seem they really do things outside the screen.

Not the answer you're looking for? Browse other questions tagged frame-rate simulations or ask your own question.

3
My rhythm game runs choppy even with high frame rate
2
How to Handle frame rates and synchronizing screen repaints
8
Representing feelings such as temperature, pain, smell, taste, hunger, and thirst immersively
2
How do games like Street Fighter compensate for bad frame rates?
5
How can I simulate relatively realistic weather?
4
Effective & Efficient Way to Simulate a Desert
1
How can I measure ms between frame to reproduce it
0
Keep platformer jump height consistent with different frame rates