I'm new at Box2D and I am making a simple game where you control the rotation of the maze and the gravity leads the ball to the exit. 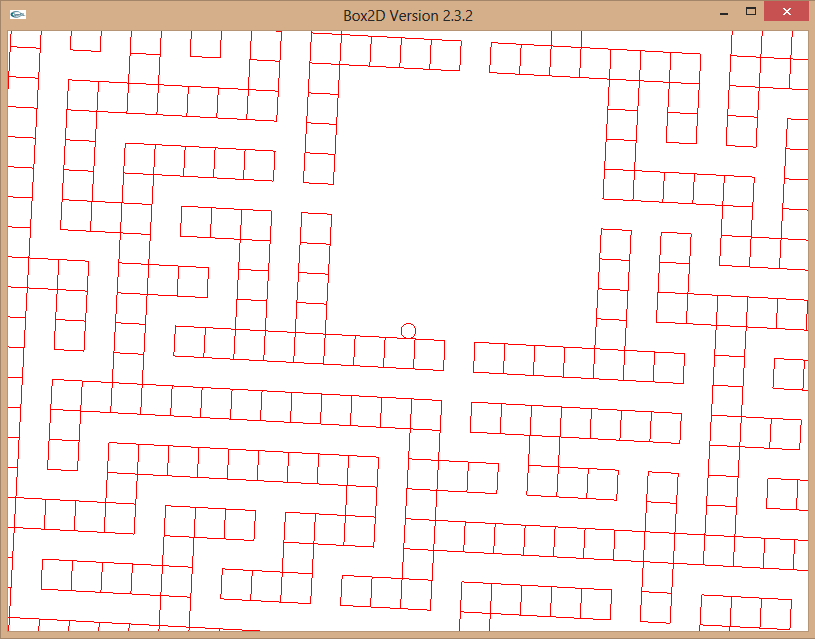 The problem: I want to rotate the maze, and I'm doing it well. It is a kinematic object, so it will only move when I want. But it always rotate on a static pivot, I think that's it's center of mass. Rotating the maze, the ball hits the walls and when too further to the center, it becomes hard to control the movement of the ball by rotating the maze as the centrifugue force is too high for the ball.

What I want: I want to change the maze's rotation pivot to the ball's position, every game loop/frame, so it will rotate around the ball always and I will be able to use only gravity, not centrifuge forces, to lead the ball to the exit.

Is there any possibility to change the center of the kinematic body all the time? I'm using Box2D Vestion 2.3.2, as you can see on the picture, and Visual Studio 2013 with OpenGL.

As you realized, changing the gravity can work for you.

It sounds like you may also be looking for a function that rotates a body around a point in world coordinates. I wrote a function for this in my fork of Box2D (RotateAboutWorldPoint) that I have translated to Box2D 2.3.2 for you as the following code:

This can be used then to rotate the kinematic body that is your maze, around the position of the ball.

Also, in case you haven't done this already, you'll probably want to make your ball be a bullet object. That'd at least help with avoiding seeing as much non-physical behavior if you're rotating your maze using the SetTransform method. I believe an alternative (to using SetTransform) would be to make your maze be a dynamic object and use a revolute joint on it. Seems it'd still be a good idea though to make the ball be a bullet object.

Not the answer you're looking for? Browse other questions tagged box2d rotation kinematic .

0
Rotating an object about a point (2D) using box2d
1
Rotating a GameObject around its center
4
Changing Box2D Body from Kinematic to Dynamic after contact
3
How to implement rotating rectangle around circle in libGDX Box2D?
1
Box2d set sprite to body that rotates around specific point
0
Unity rotating camera around specific Vector
0
Rotate object around a dynamic object