How to make some monsters appear more dangerous than others?

My game is an open-world co-op MMO with retro graphics, permadeath and no leveling system. 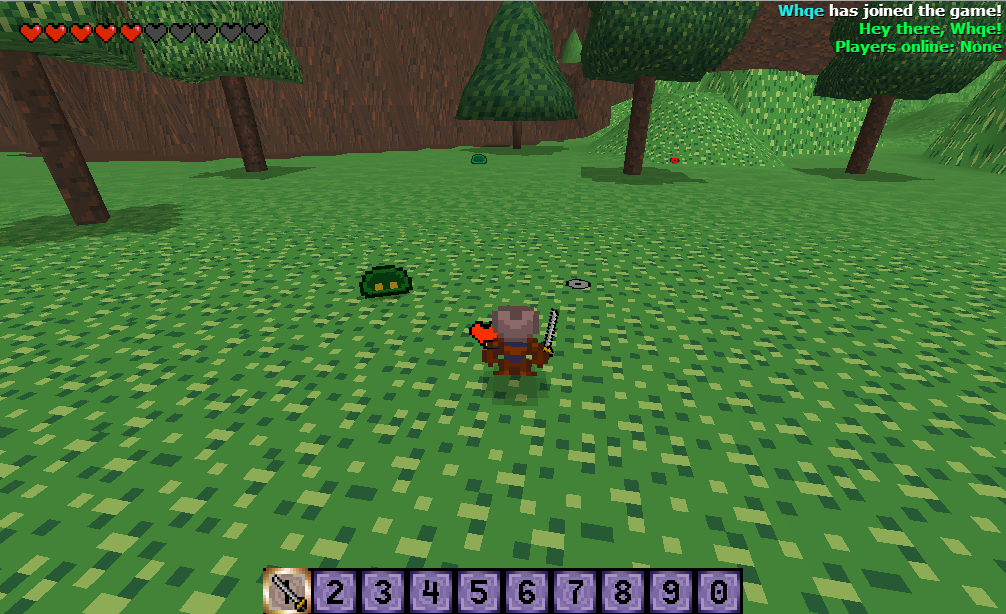 The problem I'm facing, is the fact that I don't know how to make some monsters appear harder than others. Since nothing has a level, and characters can only get stronger by acquiring better items, it's difficult for me to "warn" players that a monster is difficult for them.

Fortunately, the whole world is designed by hand and we know which areas should be more difficult than others. So this means, I as developer knows which monsters are stronger than others.

But new players won't! I don't want them to get frustrated by walking into the wrong monsters reserved for higher players.

So then, how can I make monsters appear more dangerous than others?

Some things I thought of:

I think not knowing the monsters strength immediately is a great idea. New areas would be much more threatening and the player can't just overpower his or hers character and run away from everything that's bigger than him or her.

Of course the player needs some hints:

As long as the game is balanced and fair i think new player won't get that frustrated by dying. In the end it's part of the game.

While you might not have explicit levels, you can probably come up with labels that give a warning. This could be done manually when the creature is created or automatically by calculating the sum of HP, attack bonuses or however else you gauge difficulty.

For example, if the monster is targeted and it's name appears in the UI, it would be pretty obvious that "Common Goblin" is a lot easier opponent than "Goblin Bodyguard" or "Goblin Lord" even if they share the same graphics.

Well, it all depends on what kind of enemies you are trying to make stronger.

If you are making variants of enemies that are stronger (Like an elite or champion enemy that is based off of another weaker enemy), you could always add deadlier appearances. Lets say you have a slime. The ultra version of it could have red eyes and have spikes sticking out of it. But then the elite version would have white eyes, horns, and be glowing white.

Characteristics like red eyes, glowing a color, spikes, horns, greater size, and having weaker enemies around it could help distinguish dangerous enemies from their stronger counter parts. Those characteristics can also work for enemies that are stronger but do not have a weaker counterpart.

Different sounds can also help separate stronger enemies from weaker enemies. While battling a weak enemy, a small song could be played. But when you engage a stronger one, the music goes dark and gives a sense of fear and urgency.

Terrain can also help. Darkened or stormy skies show danger, as do barren or deserted lands. You would put weaker enemies in happier territory, like a grass field or a forest. But you would put the stronger enemies in a darkened isolated cliff side, or a fiery volcano. Ambience can tell apart the weak areas from the strong ones. Birds tweeting or a small breeze could mean weak, but screams and moans would tell a player that the area could cause death, or potentially have strong enemies.

Even the location of the enemy could tell them apart. If you have enemies that are guarding treasure, make the stronger ones guard a more elaborate chest than the weak ones. If the strong enemies are near weaker enemies, put more weak enemies, and less strong ones. That gives a sense of leadership, showing that the strong one(s) are ruling over the weaker ones.

Equipment details can also decide strong and weak. More detailed and/or bigger weapons can show strength. Blood stains can show that the weapon has killed before, or that blood has splashed on his armor.

This goes into the concept of character development and design which can go very deeply. There are many ways to alter the hostility of an enemy, it is all relative to the resources you have at your disposal to make it happen.

Here are some ideas that will help you:

Body Gesture: What is the enemy doing in their idle state. Is it actively roaming? or is it just stationary? It is fast moving or is it slow? The way a monster moves can emit an aura of danger.

Sound: What types of sound it is emitting? It is a cute oink or is it an aggressive ROAR!

Of course, there is more to it than just those. Things such as Environment Context, Facial Expression, Dress Code, and Size. Other things that indirectly notify a player the enemy is dangerous could be different display of health bar, change of music, etc.

I hope this helps :)

You can borrow ideas from nature! Horns and spikes, big angry eye spots, and many other such cues make things look more menacing. You might also try giving higher-level things tendrils, glowy red eyes, and so on.

Heck, using eye color as an indicator of relative strength might work pretty well too - when you're level 10, that level 5 slime has baby-blue eyes, but if you're level 1 it has glowing red eyes with a bloom coming off of it.

You could give a character an 'awareness' property, modifiable via some in-game equipment/collectible.

This element would set a tone for the gameplay. Players that like the feel can stick with it. Players that don't can pursue the awareness upgrades.

Consider how Halo: CE does things with the Elite enemies. There are several different colors of elite armor that one encounters, and as far as I can tell, the color is the only visible difference between them. So how does the player know what the hierarchy of colors is? Rarity! Blue elites are the first color encountered, and they are by far the most common. Next are red elites, which are less common, and finally yellow elites are the rarest and most difficult (and they usually have giant glowing energy swords, which is another hint). There are other colors too, especially in the sequels, but you get the idea.

So, sometimes simple visual distinctiveness combined with the frequency and context of encounters is enough to distinguish. For example, I believe that for the first 2 and a half missions of Halo: CE, there are only blue elites. So the first time the player encounters any other color, the natural response is to proceed with caution until the player knows how the new color is different from the blue elites. Basically, the important thing is that when the player encounters a new "level" of monster, it mostly just needs to look and behave obviously different from what the player has seen before. Once the player realizes it is new, wise players will approach with caution until they understand the new abilities and behaviors of the new monster.

If your goal is to highlight some special qualities of the monsters, you may also make them flash or change their colours, or make them moving in a different way, or changing their dimentions at certain rhythm.

I think in enemy design, form follows function. I would suggest that you consider what makes each enemy more or less of a challenge and, given that part of your goal is to efficiently communicate this information to your players, to also consider some existing enemy modeling paradigms:

Also, in addition to what Fluffy and Shadows wrote about eye color, I think you may be able to add character to the appearance of your enemies by altering eye shape and size.

What about some kind of simulation of fear (tunnel vision, heartbeat sounds etc.)? Approaching enemies that would easily kill the player would trigger this.

Not the answer you're looking for? Browse other questions tagged graphics difficulty or ask your own question.

15
How did they make the screen move in Dangerous Dave?
5
How to make game appear to run faster?
1
How to properly handle equipment enchants
1
How to make image bigger than the screen to be slideable in the screen in monogame for windows phone 8?
9
How can I make my Color Mixing game more difficult?
3
How should I balance temporary buffs to make my game fun?
1
Does it make sense to do more calculations in the fragment shader if there are more vertices than pixels?
16
How to make a 'One Hit and Dead' platformer feel fair