How do I calculate rotational impulses in rigid body collisions?

I'm writing a simple 2D physics engine to help me understand the inner workings of physics engines. I'm following Randy Gaul's tutorial which can be found here and It's been extremely useful and interesting. I'm now on the fourth and final article in the series which covers rotation, but I've spent weeks trying to figure it out and I've hit a brick wall. I've looked all over for other tutorials or explanations, but I have yet to find any that help. No matter how I impliment it, to the point of translating the source code of the tutorial to C# I seem to get completely counter intuative behavour.

The first cause of confusion is that the tutorial states that the collision resolution impulse for two bodies according to the tutorial is the first of the equations below, but the source code accompanying the tutorials appears to be using the second. These two don't appear to be equivalent to me, but I may be wrong. 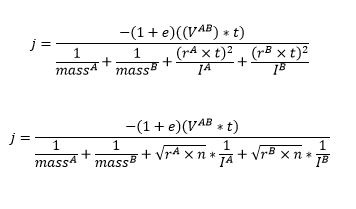 I'm using the second equation in my code, as implemented in the example source code. I alter the angular velocity as follows:

Assuming neither of these are the problem, then I must be doing something fundamentally wrong. Can anyone explain, or point me to a good explanation of how to calculate the angular components of my physics engine because I am completely stuck!

Thanks in advance (and sorry for the lengthy question), Adam

You're in luck. I did a full translation of Randy Gaul's 2D physics engine into C# and XNA. He hasn't really explained things well for beginners like me.

For your answer, you should just multiply the cross product with the inverse of the inertia of the body. This is from my translation:

It works fine for me (just as Fahim Ali Zain said in his answer). I am anyway going to release a series of tutorials properly explaining the code underlying physics engines and introduce extra features like Raycasting, a few weeks in the future maybe.

Whatever collision be, angular momentum is conserved. ie Iw = constant with the coefficient of restitution (in translation, i dont know if its said the same in rotation) u define, and with the moment of inertia, you should be able to figure it out.

And i think this would similar to collisions in 1D, since only one axis is used :)

Not the answer you're looking for? Browse other questions tagged c# rotation physics collision-resolution physics-engine or ask your own question.

9
How to resolve penetration of two colliding bodies
6
How do you calculate the rotational velocity of a flying object?
1
How would joints work in an impulse-based physics engine?
1
Rigid body physics resolution causing never ending bouncing and jittering
0
Applying friction force not working correctly
2
Impulse resolution for purely rotational collisions (relative linear velocity = 0)
0
AABB Collision Detection Confusion
0
Rotation of a 3D ball on a plane