Making a night scene without being dark on the monitor

What would be a good way to make a 3D scene look "like" a dark night, without being so dark on the monitor that it's hard to see stuff (especially when playing in a brightly lit room).

I've been experimenting with making the light bluish in nature, and having a fairly dark ambient component with a brighter diffuse component, but I find the result either a bit lack-luster or still too dark, depending on the exact parameters.

Are there any good examples to study?

This is one case where it's useful to steal ideas from Hollywood, who have been doing this for decades. 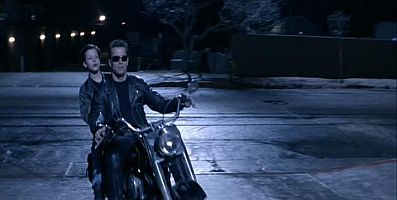 The picture above was filmed during the night time, but it's not actually a dark picture. Notice how the actors' faces are very well lit, although the sky is pitch black and the road is very bright (which you wouldn't normally expect). Studying similar shots will give you some clues to how you can fake a night scene while still allowing your viewers/players to actually see.

This one's easy to guess; since sunlight is usually yellow, the spectral opposite of that happens to be bluish/purplish. That is, take neutral white light, remove yellow, and you end up with a blue/purple colour.

Increasing contrast has the effect of making bright things brighter and dark things darker. This simulates reality where, in dark conditions, bright things like artificial lights look much brighter in comparison, whereas we lose the ability to see dark details.

And also darken things that are typically bright during the day but dark during the night. This actually goes a long way towards the illusion and seems less "artificial" than tricks like making your scene blue. In the old days, with black/white cameras, they took advantage of this by filming during the day with a red filter over the lens, which conveniently darkens the blue sky but little else. 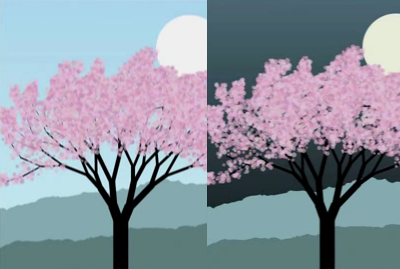 The corollary of that is to brighten things that are dark during the day but bright at night. Think artificial light sources like flashlights, campfires, computer screens. Exaggerate their brightness.

If you don't have the luxury of actual light sources (like full moon, or streetlights) in your night scene, you still need to add some light so viewers/players can see, but make them cast light in funny angles so they aren't associated with the sun and break the illusion. Daylight typically comes from above at a slight angle, and this trope extends everywhere, even in UI where "3D" buttons are typically brighter at the top and left edges, and drop shadows extend down and right. For night time, reverse those angles. Have lights illuminating from below, or behind your subjects. Behind is particularly neat as it shows silhouettes but leaves features undefined, mimicking the ominous dark. 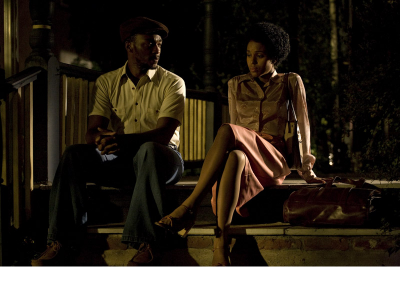 Some night scene; note the light angles and the well-outlined hat and afro

A lot of these tricks come from a filmmaking technique known as "Day for night", which is where a low-budget film will shoot night scenes during the day but use a number of filming tricks and editing to make it look like night. The relevant tricks I've already mentioned above but you can read on here: http://www.videomaker.com/article/10368-shooting-day-for-night

Not the answer you're looking for? Browse other questions tagged lighting graphics-design .

4
How do you accommodate newbies while still creating depth in the design of light/dark systems for MUDs (or other text-based games)?
0
Lights appear when run in the player although Editor playmode seems to be dark enough [Unity 5]
1
How do you turn off all scene lighting in the game view like you would with the scene view button?