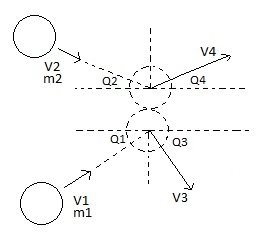 I searched internet and many physic topics, but not found how to calculate this values in Java?

Though, since the balls are almost aligned along the y-axis in relation to each other, it looks like maybe you're looking for the angle of V3/V4 relative to the surface at the point of impact, even when that doesn't line up with the x-axis.

In that case, you need the normal of impact (most collision functions will give you this as some of the output, but it's easy for spheres/circles anyway -- just normalise ball1.xy - ball2.xy). Anyway, you can use that normal and V3 to calculate Q3 like so:

It'll vary a little depending on what libraries you're using, but basically: the dot product of two normalised vectors (that is, vectors with a magnitude of 1) will be the cos of the angle between the vectors. Apply the inverse cos function (acos) and you get the angle between them.

It's much simpler than you think:

Just use the "relative velocity" to calculate the impulse

Then, use it to project against the normal to find the impulse.

maby this can help you http://en.wikipedia.org/wiki/Coefficient_of_restitution there is a break down of the entire problem

Not the answer you're looking for? Browse other questions tagged java collision-detection physics or ask your own question.

0
Java Tile Collision Detection not accurate enough
3
Collisions between moving ball and polygons
4
Splitting logic into threads in Java tower defence game
2
How to implement bullet physics in libgdx
0
How to draw a curved line in Box2d?
2
2D bouncing ball simulation - angular velocity
3
How can I compress resources into a single file in Java?
3
Java: problem with 2D corner collision
5
Destructible Terrain like worms
1
How to detect a collision and collision impact?