I tried following the "Introduction to UE4 Animation and Rigging Tools" tutorial with maya but I dislike maya and don't under stand it so I tried importing the skeleton from the "3rd Person Game with Blueprints" tutorial into 3ds max and hoping I could just edit the mesh because I want about the same skeleton.

So I imported it and just made a basic mesh to test, Then removed the old mesh 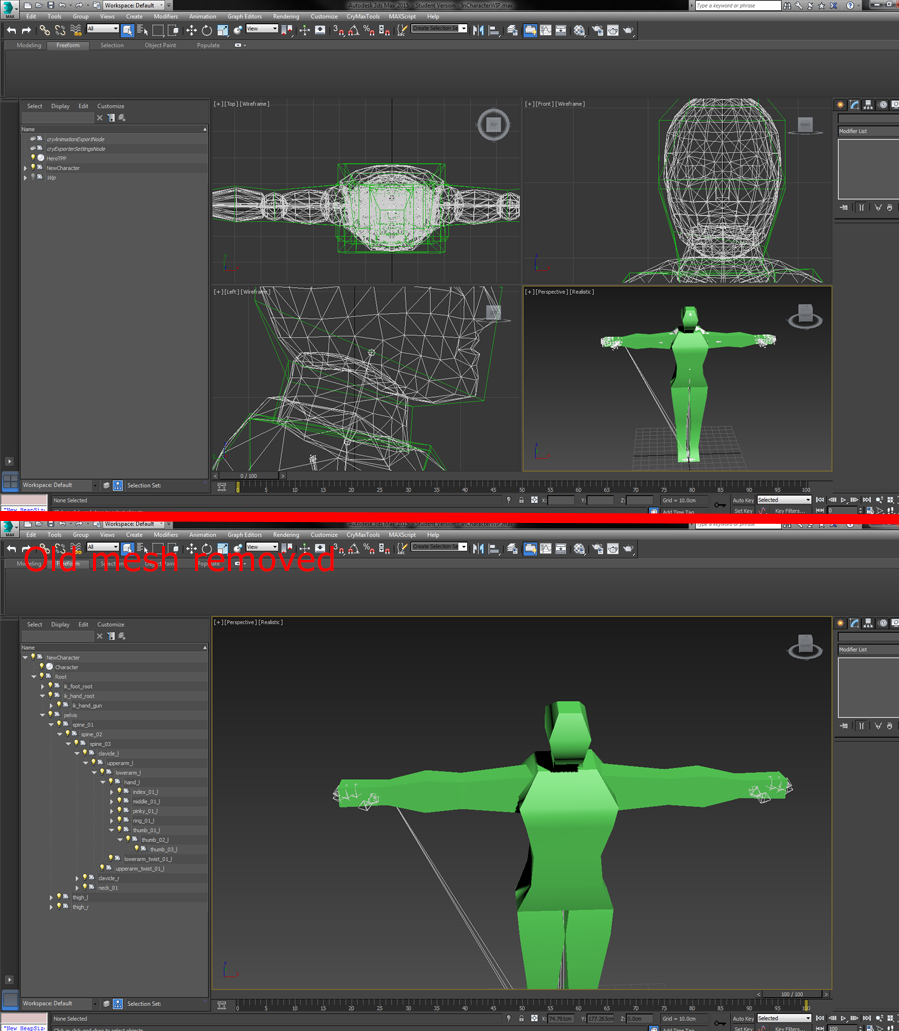 Now I did it like this hoping I could use the existing animations for the original but when I try to play an animation with it in unreal engine 4.7.3 it says it does have any with the same skeleton, then when I tested it trying to ragdoll it stays rigid and just falls over.

Please help, am I importing it wrong am I missing a step? Why doesn't it work?

I managed to do this right just a couple of days ago, I can't guarantee that this is the right or best way to do it (most likely not), but it worked for me:

a) When you open the exported mesh in 3DS, 3DS adds another bone as the parent of the two existing "bones", one being the skeleton, the other being the mesh.

To overcome this, you have to unparent (drag each of the two children out of that bone) the mesh and the skeleton, and delete that one. Export and import to UE4 to verify that this works as expected before touching anything else (materials will be missing, but that's not a problem at this stage).

b) The second issue I had, was changing mesh. Since you are anyway beginning with a primitive, I just selected the existing "editable mesh", selected the faces sub-selection, deleted all faces except a square composed of two triangles at the top of the head, and then went on with extruding and working from there.

Notes: 1) The skin modifier is essential to remain over there if you want to play it safe. This is what binds the model to the bone, and generally does a decent job on it's own.

2) If you add any modifier, it will be applied after the skin modifier, I dared not try and see what would happen, I suggest you avoid it on the first try so as to be safe and minimize the suspects of any unexpected results.

3) Because of 2, you had better work with the tools in the edit panel, normally on the right side of the screen. It's not as intuitive, but you'll get used to it soon, you have all the basic stuff for a basic rig.

Problems encountered when following this method:

a) (Solved) The model was flickering. This has happened to too many people and thus I guess it's not exactly the model's fault. The typical solution is deleting the Physics Asset

b) IK bones stretch a vertice of each limb all the way to the ground, I'm still trying to beat this.

I'll also try to make a video tutorial once the last problem is solved, and I'll update with anything further I figure out. Hope this helps.

Not the answer you're looking for? Browse other questions tagged models windows skeletal-animation importing unreal .

3
How can I convert a 3ds Max .max to a Cinema 4D .c4d and maintain the animation?
4
Middleware to Bring 3D Meshes into OpenGL ES 2.0
1
Blender to 3ds max to cal3d format
1
IK bones stretching vertices to ground during animation (UE4, 3DS Max, using default skeleton)
0
Mixamo: can animations ("without skin") be re-used on any Mixamo rigged model?
2
No local transform with skinned mesh with assimp?
0
Mixamo Rig Hierarchy Reference (In Text List/Tree format)? (modelling in Maya for use in Unity and Mixamo)