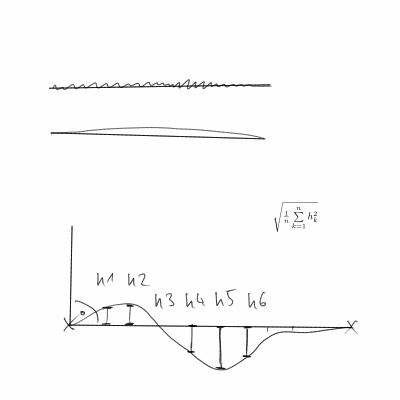 Then we then get S by summing up \$h||D_a(t)||^2\$ for all data points and possibly normalizing by the length of the curve. Most likely, we use \$h=1\$, but it really is just an arbitrary scale factor.

To reiterate, S will be zero for a line and larger the more it deviates from a line. To convert to the required format, use \$\frac{1}{1+S}\$. Given that the scale is somewhat arbitrary, it is possible to multiply S by some positive number (or transform it in some other way, e.g. use \$bS^c\$ instead of S) to adjust how straight certain curves are.

Not the answer you're looking for? Browse other questions tagged algorithm geometry touch .

1
Given a start and end point, how can I constrain the end point so the resulting line segment is horizontal, vertical, or 45 degrees?
5
How to evaluate a user against optimal performance?
6
Robust line of sight test on the inside of a polygon with tolerance
12
How can I find the largest sphere that fits inside a frustum?
1
Why can't my A* implementation find a path out of an open room?
0
Need help creating points in an array
2
Point plotting with a line graph
0
Dealing with curved lines in GJK
4
Supercover line algorithm from corners instead of the square's center?