Script attached to one button triggers other buttons too in unity 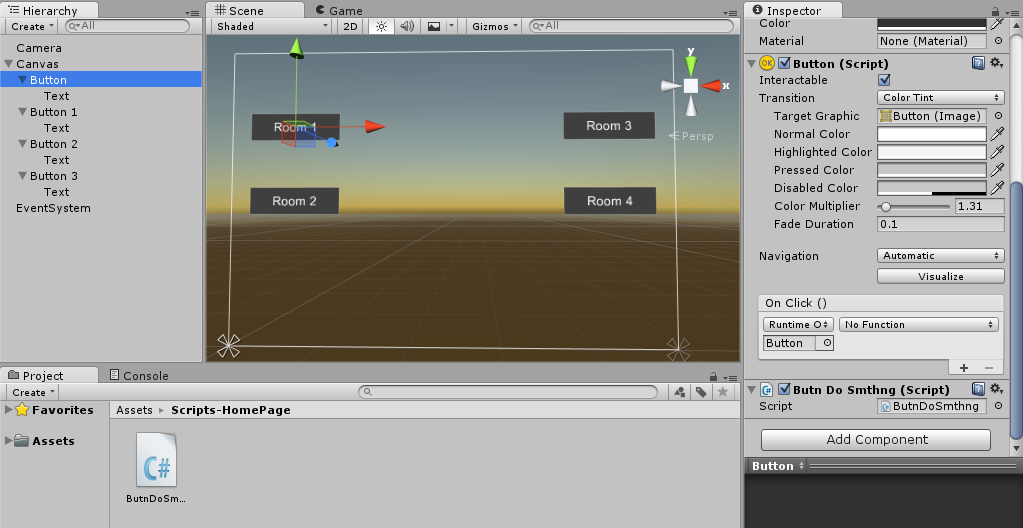 As you can see in the image above, I have 4 buttons.

I have attached a C# script to only one button to change the scene on click.

Now the scene should change only when I click on the button to which I have attached the script.

But the scene changes even if I click anywhere else on the screen.

This is the script that I have attached -

Whats wrong here and what might be a solution ?

Input.GetMouseButtonDown(0) will return true whenever mouse button 0 is pressed, no matter if the mouse is only pressed over the object that has that code in it's script.

You might be thinking, instead of Update to use OnMouseDown(), which only activates when that object's collider is clicked. But, you'd still being using Unity's buttons wrong.

What you need to do is a create a public SceneChange method, doesn't even have to be in a script attached to your button, just somewhere in the scene, perhaps on a GameManager object. Then is that OnClick event that's in your Button properties:

Now when your button is clicked, it'll fire an event which will trigger your SceneChange method, and it'll only be from the button you choose.

See this tutorial from Unity for a walkthrough of how to create these methods.

2
How can a single script attached to multiple enemies provide separate behavior for each enemy?
0
Adding a function call to a prefabbed button in Unity
0
Click event doesn't trigger when clicking
1
Send Messages in Update Function Button UI Unity 5
4
Grid of buttons in Unity - button bounds are stretching beyond their visuals, capturing clicks meant for other buttons
0
enabling and disabling the script in unity
0
How can I use gui buttons and canvas with 3 different gameobjects when I click on button it will make something else for each gameobject?
0
Some UI button script not working in apk build!