My question is relatively hard to explain(for me, at least), so I'll go one step at a time and just tell me in the comments if it's not clear enough.

So I'm making a "Defend Your Castle" type 2D game, where two players own a castle and create units that will move horizontally to try to destroy the opponent's base. Here's a screenshot of the game: 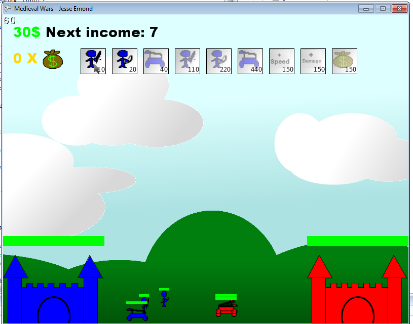 The distance between both castles is much bigger in a real game though, bigger than the screen's width actually.

Because the distance is bigger than the screen's width, I had to implement a simple 2D camera: Camera2D, which only holds a Location Vector2 (and I always make sure this camera is within the field area).

Instead, I'd like to make a moving background, kind of a "scrolling" one. But rather than making a background with the same width as the distance between the castles, I'd like to make one that is a little bit smaller(but still bigger than the screen's width). I thought this would create an effect of "distance" with the background(but it might just look awful, too).

Here's the background I'm testing with:

I tried different ways, but none of them seems to work. I tried this:

When I run this with fieldWith = 1600, BackgroundTexture.Width = 1500 and while looking at the rightmost area, the background is offset to the left by a too big amount, and we can see the black clear color in the back, as you can see here: 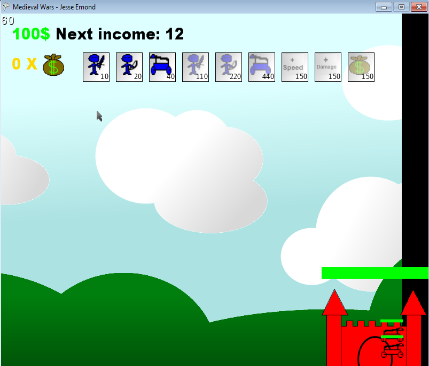 I hope I explained properly what I'm trying to achieve.

Thank you for your time.

Note: I didn't know what to look for on Google, so I thought I'd ask here.

The solution to your problem is actually quite simple. Instead of calculating the ratio, you calculate the possible movement-distances for camera and background and interpolate them.

Assuming that the camera x-coordinate is at the left, your background position would be:

Update: If you want to stick with the backgroundFieldRatio (which is probably more intuitive) you can calculate it like this:

This should give you the proper movement ratio to plug into your code (or the one proposed by Andrew Russell in his answer).

First of all, you've got a bit of a maths problem:

I can't be entirely sure from the code you've posted, but if fieldWidth is an int and not a float, then your backgroundFieldRatio will not be set correctly (you are dividing two integers and getting an integer result). It will be set to 0.0f. Based on the results you are getting, I suspect this is the case.

Second of all, the way you are setting your object positions based on the camera is quite ugly.

Basically when you do parallax scrolling you have multiple 2D "cameras". You should set your camera position to target somewhere in world space

You can have your parallax camera as:

Then just draw your parallax scene first using the parallax camera, and then draw your main scene on top using the main camera.

What you should do is create a translation matrix in your Begin call and simply draw all your sprites in World Space:

That way you can modify how your camera works without having to adjust every single Draw call!

Sounds like you are indeed talking about parallax scrolling.

(it's not c# or XNA, but the skills are transferable)
You can read up on some simple scrolling backgrounds in an sdl tutorial actually
http://lazyfoo.net/SDL_tutorials/lesson22/index.php

(one of my all time favorite tutorials)

Then you can make multiple layers, and move them relative to the camera's position.

Not the answer you're looking for? Browse other questions tagged xna 2d c# or ask your own question.

3
Generating background tiles for a side-scroller with variable player speed
3
C# Pathing algorithm for moving a object from point(X, Y) to point(X, Y)
0
Moving along a flat plane with accordance to camera view
2
Odd offset bug in Farseer/XNA/C#
2
Distance between two 3D objects' faces
0
Using a Coroutine in a character move left/right situation for a random amount of time
1
How to completely stop the camera from clipping into the ground