I am creating a voxel game, and I have recently run into an issue. My world is drawn by a DynamicVertexBuffer, which just consists of vertices for the blocks themselves. On top of that, I switch vertex buffers to my "Selected" vertex buffer which draws a white outline of a block for now. (This includes alpha but I have it turned off until I figure this glitch out).

This issue I run into is here: 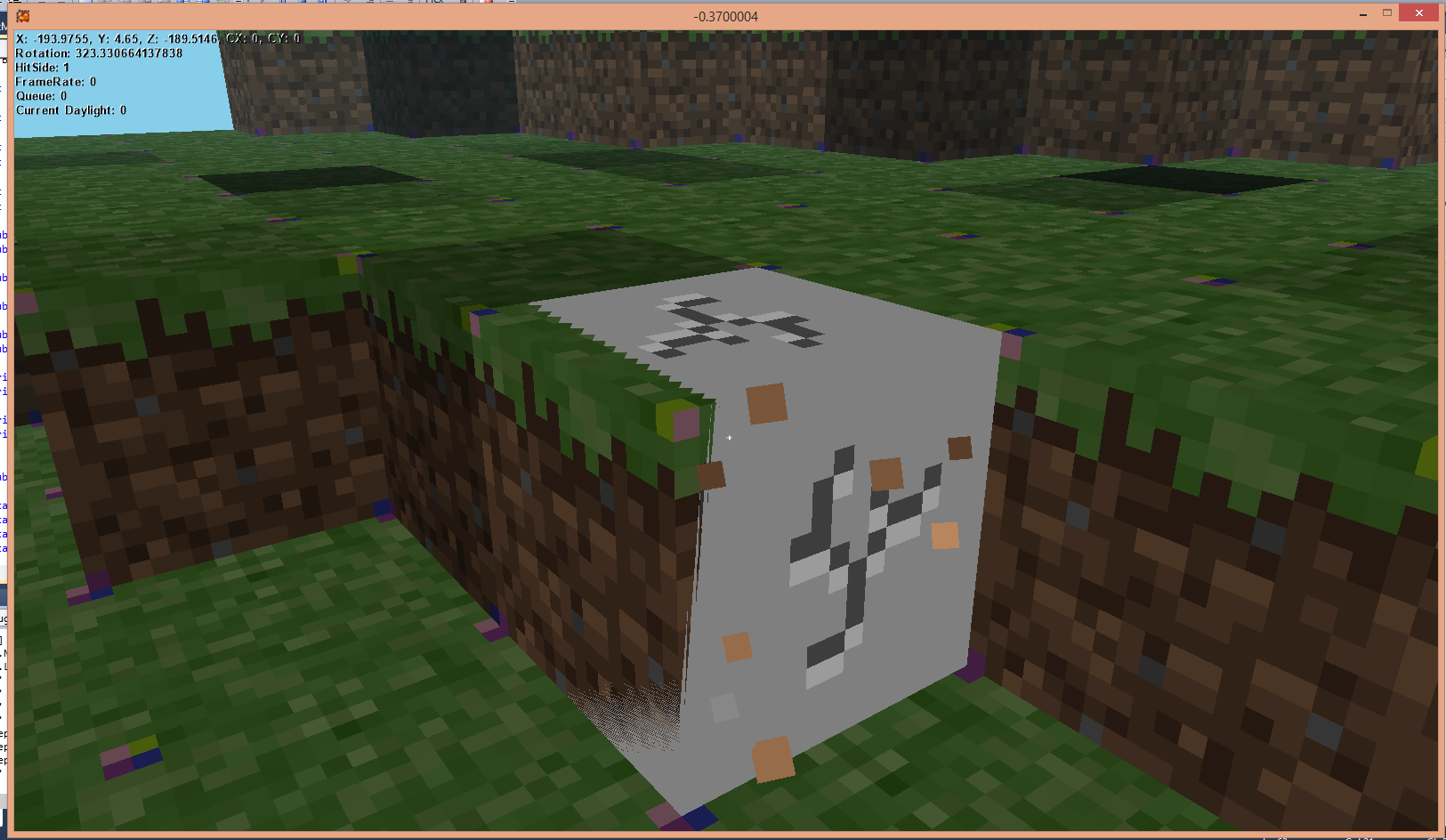 Rather than the selected buffer overwriting my world block, it sort of does depending on the angle. Sometimes I see no overlap, sometimes weird glitches like shown above.

I was wondering, what can I do to prioritize the "Selected" buffer so that it is drawn on top of anything else sharing coordinates? Note that I did have this working, when everything used a basic effect. After switching to my own custom effect.fx (which supports fog and lighting, if that has anything to do with it), I run into this issue.

Any help is appreciated, thank you!

Just got the "flickering" of sorts to stop, I changed the DepthStencilState of the buffer to:

The only downside here is that it draws all 6 sides of the selected block now and it overlaps the world completely, again I don't know if this would be the right way to do it but any help would be appreciated: 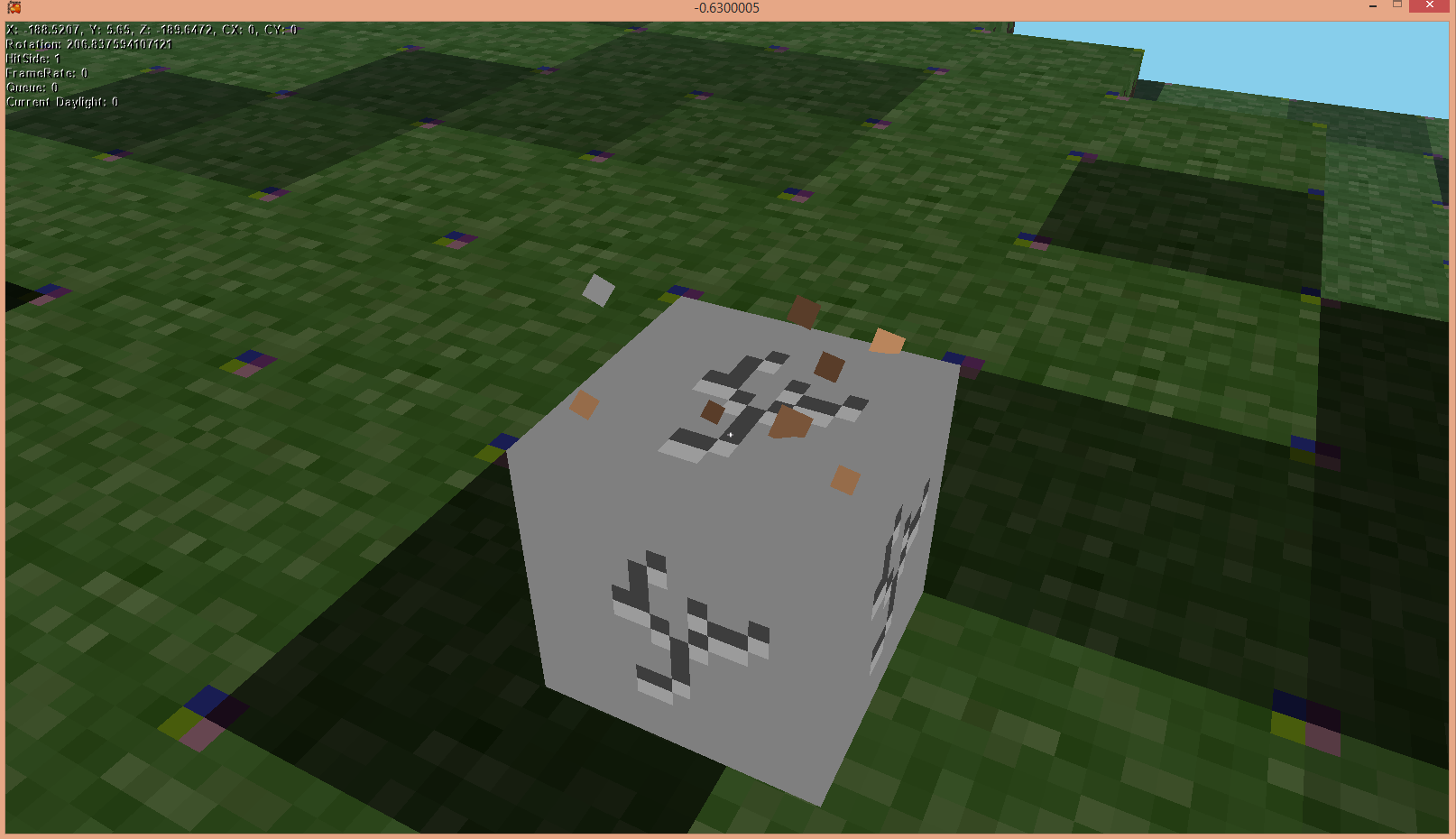 The above picture is flat with the rest of the terrain around it, as you can see it draws the two sides that wouldn't actually be visible as well.

You don't want to turn off depth stencil state. Leave that the way it was before.

Giving the Problem a Name

The problem you're having is that two objects are being drawn in almost identical locations, but because of floating point precision errors, at the different pixels, sometimes one turns out to be barely closer to the camera/eye than the other, and on other pixels, it's reversed.

This is what's called z-fighting (or z-buffer fighting, or depth-buffer fighting). It's a very common problem when you're drawing objects on top of each other. Basically every 3D game will deal with it sooner or later.

There are two solutions to this.

1. You can find a way to only draw one object--the one that should be visible. Based on the pictures, you're probably drawing the "normal" cubes in a large group, all at once. If you could skip the selected block and draw the selected version (immediately, or after the rest of the blocks are drawn) you wouldn't get z-fighting, because there wouldn't be two objects to contend with.

2. You can adjust the depth bias that DirectX has. (OpenGL's got a similar thing, though off the top of my head, I don't remember what it's called. It might also be depth bias.) It's a render pipeline setting, specifically on the rasterization step.

Some Details on the Solution

Assuming you go with the second (which is probably more common) in XNA, you'd simply assign a new RasterizerState to your GraphicsDevice object that sets the DepthBias property to a non-zero value. (I'm not 100% sure how MonoGame handles this. I think it supports it, but if you're targeting non Microsoft platforms, and you're using MonoGame, you should try this out on one of those platforms.)

Setting a depth bias value essentially adjusts the computed depth value by a predetermined amount, which moves it a little closer to the camera or a little farther, depending on what you put in.

There are a few little details that make setting a depth bias on your rendering pipeline a little troublesome, but we can deal with this.

So the best way to set this is by creating a new RasterizerState with properties identical to the current one, and then just change the one you need (DepthBias in this case) to the appropriate value.

I've opted to do this with an extension method that uses a "fluent" API to make a copy with the change:

Add the above to new file in your project.

Before you draw your selected object, do something like this:

After you draw your selected object, revert the depth bias back to the default of 0:

You are, of course, free to get the depth bias set any way you want (you don't have to use my extension method) but that's the general idea.

About Which Values to Use...

What I found interesting here is that all of the documentation seems to say, "Use a floating point value between 0 and 16, where the higher it is, the closer it is to the camera." Changing the depth bias here didn't seem to work that way for me.

It seems like the way I was taught, setting a depth bias adjusts the final depth value by that amount, assuming 0 is the near clipping plane and 1 is the far clipping plane. In this case, putting in a larger value will push the object farther from the screen, while putting in a smaller value will move it closer to the screen. And that means your reference range is really more like -1 to +1, where -1 will force it to the front no matter how far back it is.

That leads a person to want the smallest depth bias possible that gets rid of the problem, because otherwise it starts to also overlap adjacent objects. (Try using a value of -1 and you'll see the selected object pops on top of everything in the scene.)

I'm not sure what to make of the mismatch between my prior knowledge about depth bias and the way it seems to actually work (which match each other) vs. the official documentation (which suggests 0-16). Perhaps somebody else can shed some light on that.

Sorry for such a long answer. Hopefully it gets you back on track.

Not the answer you're looking for? Browse other questions tagged xna monogame voxels vertex .