So, I'm starting to introduce attacking to our 2D space RTS (This is in Unity, so it's component driven). Initially it was as simple as "enemy in range, damage applied". However there will be multiple "types" of weapons/attacks that are associated with their particular ship or structure. As well as other factors involved past just raw damage such as the damage type, and possibly inertia in the future.

Would you guys have each unit and structure type have it's own attacking type. Meaning you make a script for each unit/structure that defines it's attack type, damage, effects, range, particles, sprites...etc And attach that as a component?

Or make a script that defines an attack type, a script for the projectile type associated with that...etc And then extend those and modify those for each unit, attaching each script to the unit/structure.

I hope I'm making some sense, I've been pondering this for so long I'm not sure if I'm solving a problem, or just making up my own problems and digging myself into a hole.

When you have a game that can have a multitude of attack types that may or may not be limited to a specific unit/structure, how do you design the framework that tied that together to the specific units/structures in a component-driven design environment?

If this is not clear enough let me know.

The answers seem to vary from "each object can have it's own attacking script" to "Have the attack types as their own scripts and assign that to each object for a more reusable solution". Lets say I have a "blaster" attack, it shoots a red projectile at a certain speed. It's damage, rate of fire, and projectile size are dependent on the unit firing it. Is it better to just make an attack script for that unit, or try and modify a "blaster attack" to fit the purpose of each unit that wants to use it?

Well, I'm honestly not an expert on this but... I think it depends on how complex and varied you think the attacks will become. Since it's an RTS I'm guessing you'll have maybe 10-50 or so different units or structures with their own attack types.

Option 1: If there is a relatively low number of units that will have attacks that are somewhat similar I would simply put everything in one big script and define the parameters used in the inspector.

Option 2: If, on the otherhand you envision a large number of attack types with dissimilar behavior you can break everything up so that each unit and building gets their own unique attack script. I'm thinking that if you do this, you might want to create a "helper" script that defines commonly used chunks of code that many of the individual scripts can grab from. This way you won't have to rewrite everything and you'll know where it all is.

Option 3: What you probably shouldn't do is have certain groupings of units share scripts, this will likely confuse you and will become a mess if the code you need for an attack is in 10 different scripts.

Here, I drew you a picture. 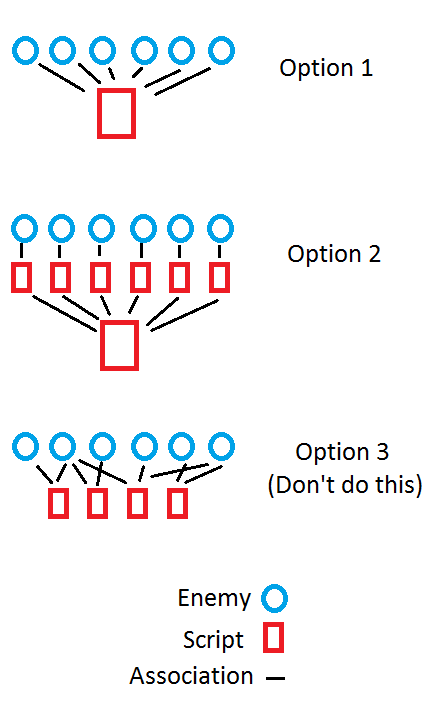 I don't know a whole lot about Unity and I haven't done game development in a while, so let me give you general programming answer to this question. I have based my answer on the knowledge I have about entity-component systems in general , where an entity is a number that is associated with N many components, a component only contains data, and a system operates on sets of components that are associated with the same entity.

Your problem space is this:

It is important that the point of contact between the attacks and the entities are as thin as possible - this will keep your code reusable and prevent you from having to come up with duplicate code for each different type of entity that uses the same type of attack. In other words, here's some JavaScript pseudo-code to give you an idea.

Sorry this answer is a bit 'watery'. I only have a half hour lunch break and it's hard to come up with something without knowing fully about Unity :(

When a unit/structure/weapon attacks, I would probably create an Attack (subclassed with all your fun details) that takes the attacker and the defender (or defenders). The Attack can then interact with the target/defender (slow, poison, damage, change state), draw itself (beam, ray, bullet), and dispose of itself when it's done. I can foresee some issues like multiple poison attacks, so maybe your targets would implement a Damageable interface that the Attack interacts with, but I think it's a workable approach that's modular and flexible to change.

Expanded Answer
This is how I'd approach the blaster attack with this approach. I'll let the others answer for themselves.

I would have my units implement an IAttacker interface or class with basic attack stats/methods. When an IAttacker attacks an IDamageable, it creates its specific Attack passing itself and its target (the IAttacker and the IDamageable, or perhaps a collection of IDamageables). The Attack grabs the stats it needs from the IAttacker (to avoid changes during upgrades or anything like that--we don't want the Attack to change its stats after it's already been launched) and if it needs specialized stats, casts the IAttacker to its needed type (ex. IBlasterAttacker) and gets the specialized stats that way.

Not the answer you're looking for? Browse other questions tagged c# unity game-design .

37
How to design the attack class in an RPG game?
1
Best Algorithm for attacking in the Risk Game
51
How do Action RPGs make different weapon types feel unique?
1
Class design and data structures for a Tower Defense
1
How would I check the range against the entirety of an enemy object, and not just it's transform.position?
2
How to load values into a script from a file?
1
Math / game design for non-linear armor degradation?
47
If I design a game that has both guns and melee weapons, how do I make them equally viable?
0
Large Armies fight : Looping through a million elements