Mapping Coplanar Vertices in 3D space on to a 2D Plane

Say I have a plane specified by a normal vector and point on the plane.

I want to specify a 2-D co-ordinate system that lies 'across' the plane, and then use that to find the 2-dimensional distance between any given points on that plane.

I want to do this so that I can specify scaled texture UV co-ordinates on an arbitrary plane. I will use the average centre of all points on the plane (the barycentre?) as UV: 0,0, and then I need a way to determine the 2-dimensional UV value for each point, subsequently.

Here's an example of what I'm trying to do: 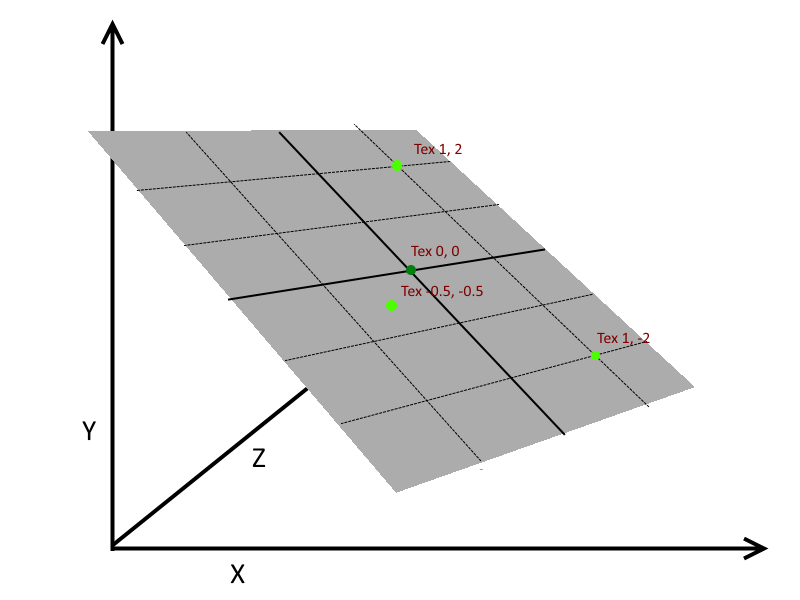 The points in bright green are supplied as the inputs, those are the values I'm trying to work out. The dark green is the calculated mean-average centre (the image isn't exactly to scale), and should act as UV: 0,0.

A friend suggested that I take (firstPoint - centrePoint).ToUnit() as my 'x-axis' and then xAxis.Cross(planeNormal) as my 'y-axis'. That seems like a good place to start, but I'm unsure how to use these values to get X/Y co-ordinates for each point.

I don't care what the 'plane-local' X/Y axes are as long as they're the same for each vertex on the plane. I can rotate them in-editor later to make the right alignment manually anyway (I don't think there's any good way to programmatically select a 'default').

You're on the right track. The method you describe gives an orthonormal basis for the plane, xAxis & yAxis.

Now for any arbitrary point on (or off) the plane,

You can also express this operation as a matrix multiplication if you prefer. It's an orthographic projection onto your plane.

Not the answer you're looking for? Browse other questions tagged mathematics textures geometry or ask your own question.

2
The normal vector to a plane ax+by+cz+d=0?
2
map the section of a procedurally generated surface on a plane
1
Error in plane transformation
2
Getting the topleft, topright, bottomleft and bottomright points of a shape in Unity3D?
3
Finding vector from a vertex to a plane
9
Dual Contouring - Finding the feature point, normals off
2
Point plotting with a line graph
1
how to handle the virtual Z axis in 2D games?
0
Work out the point on an ellipse given centre, radius, and direction vector?
0
finding the angle of rotation of a 3d line