Position problems instantiating lasers at the sides of a space ship

I have a cube representing my space ship in the scene, and a laser prefab that is instantiated at the 2 sides of the space ship any time the user presses the spacebar, i use this C# code (placed in the script attached to the space ship, just a cube right now) to calculate the position of the lasers and instantiate them:

At this point, everything worked perfect, and the lasers are instantiated correctly at the sides of the cube, exactly at the middle of the 2 sides.

The problem came yesterday, when i replaced the cube by a real space ship model, a simple design made by my brother in Blender, and attached the same script my cube had, the lasers are instantiated very above from the space ship, producing the effect seen in the next image, the lasers are spawned at the red line i drew just for showing purposes, when i need them to be instantiated at the green line: 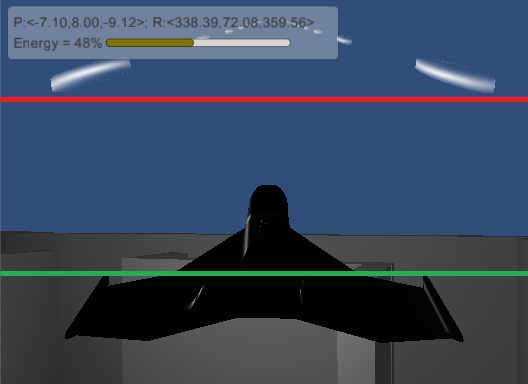 Here you can see the space ship model vs the cube, both firing lasers: 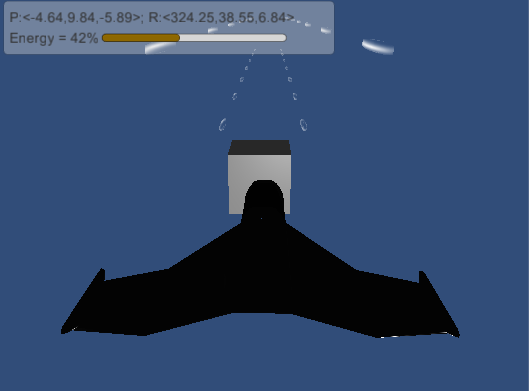 We designed the space ship model in blender, in the origin of coordinates, without any other objects or light sources, so my doubts are:

I don't have the model here right now, if you need it please let me know and i will try to upload it to somewhere later.

Thank you so much for your help!

There are better ways to do this, though (the two I'll suggest both boil down to the same thing). B is how I prefer to do it, though there are doubtless many ways:

A) The first is to add a rig (i.e. bones) to the model in blender. One will need to be the root. Add two more at the appropriate points, the wing tips, pointing forward with the model. When the model is imported into Unity those bones will be gameObjects. You can name them (the bones in blender) and find them using any method you care to and simply spawn at their location, with their orientation.

B) Similar but simpler, after you import the model add some empty game objects as children and position them where you want the laser bolts to spawn (correct position and facing). Then make a prefab out of this, and use it. You then find those objects and spawn on their location/orientation (by name, or by tag or any other method you choose).

As a suggestion, you'll probably want the prefab to be an empty game object with the model and laser markers as children. If you add all this under the model you may lose them if you re-import the model file. As long as they are all positioned relatively, there is no reason for anything to be an actual child of the mesh-containing objects.

Both approaches result in the same thing. The second just avoids messing around with bones in Blender, which is trickier than adding a few gameObjects in the Unity editor.

You might also consider creating a 'laser spawner prefab', an empty gameObject with a script to spawn your laser bolt at

Then you'd apply those prefabs to your model-prefab. Then you could reuse these on any other model as well, though you'd need some method of sending fire messages to them.

I followed the answer of DrHeinous and used spawners for the lasers, and now it works just great and i can mark exactly where i want the lasers to be spawned.

These are the steps i followed:

Now the laser is spawned at the exact position i choosed placing the LaserSpawner:

Not the answer you're looking for? Browse other questions tagged c# unity models blender design-patterns or ask your own question.

5
Replacing a custom 3D model format with something more standard
1
Unity scaling instantiated GameObject at Start() doesn't "keep"
1
Unity - An unwanted Collider , far too big , being added to meshes without reason and I cannot remove it
1
Why is there a discrepancy between these two transform.up vectors?
1
Instantiating problems
0
How to calculate a direction that will turn a parent so that a locally-rotated child is faced in a given direction?