Collision between AABB and Circle

I'm programming collision systems for a 2D game engine. The idea is that different systems can interact with each other. So one of the cases would be check collisions between axis aligned bounding box against a radius based circle collision. They both are implemented to react with its same type of collision returning me a minimum translation vector. So my approach is to combine them was to interpret the box with its bounding circle if the circle was in one of the corner outer regions of the box, and check collisions between both circles but if the circle is located in a side outer region of the box I interpret the circle with its bounding box and apply AABB collision. 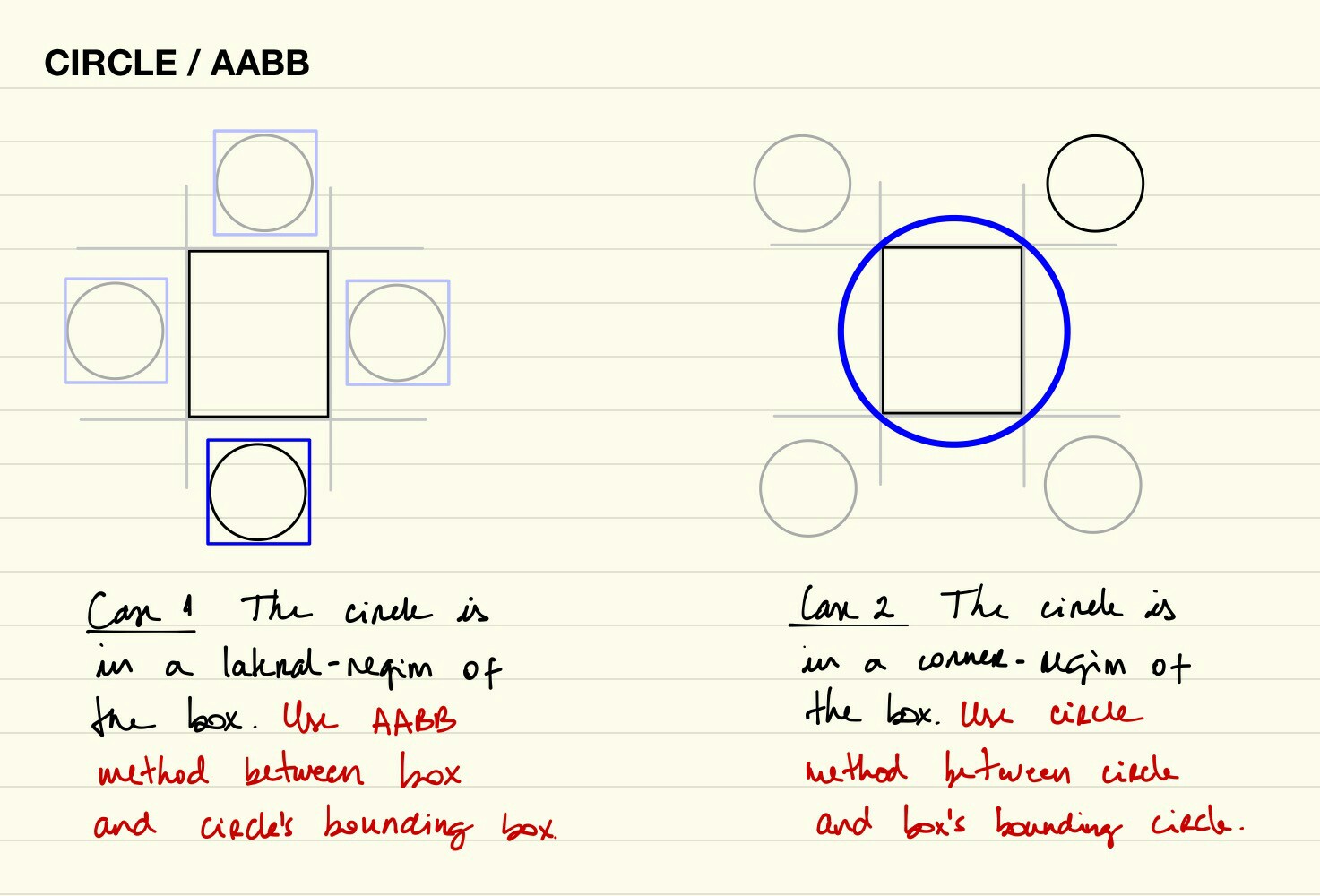 The question: Is that approach, a good one?

( Edit : the method above works only for square AABB, i'll have to think on how to improve it, sorry ) 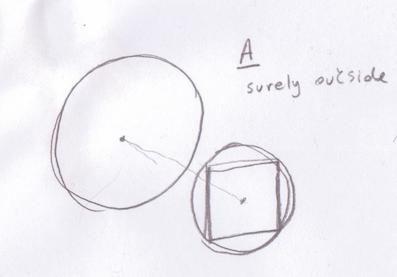 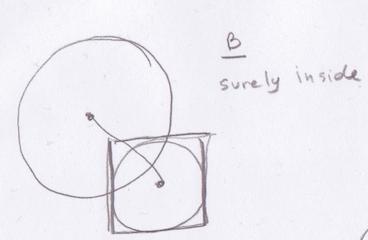 To do that quickly , precompute inner, outer radius for your AABBs.

Some pseudo-code to illustrate :

I've been thinking about this problem for a long time and looked at some of the answers here and on other forums. I came up with the following idea:

The idea is to find extreme points for the center of the circle to lie on. These are points where the circle is positioned in such a way that it's just touching the rectangle at one point. If we trace out all such extreme points, we get something like the following picture: 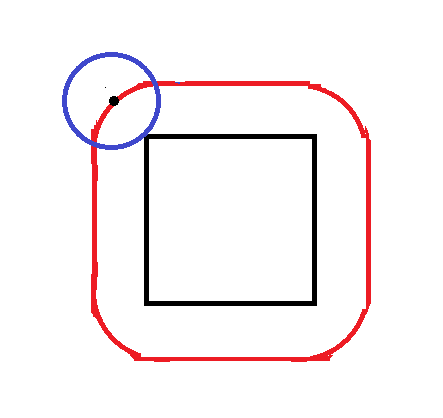 To that end we can divide the rounded rectangle into 6 parts (4 circles with centers on the vertices of the AABB, and 2 rectangles): 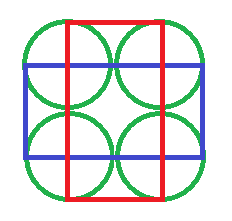 Note that this method does not require the center of the AABB (although you would already have that information anyway) and only depends on the center and the radius of the circle.

Specifically, when the circle is just barely into a corner region, the square is treated as suddenly larger. If the circle was grazing the square, it will suddenly be intersecting. The behavior over time goes nonlinear...

What you actually want for case 2 is to treat the AABB's vertices each as a circle of radius zero. (You'd only have to check the vertex for current corner region.)

(Additionally, the method as you describe it becomes asymmetric on rectangular AABB's; the long sides will bulge more than the short sides, when approximated with a circle.)

To detect collisions between a circle and an AABB, you should find the closest point from the AABB to the circle. You can run the below code snippet and try to move the purple point which represents the AABB center to watch the position of the closest point.

The math behind it is to clamp the distance from AABB to circle on each axis separately. The value will be clamped on each axis if the distance is greater than the extent(half-width or height) or less than the negative extent. Like the below figure shows: 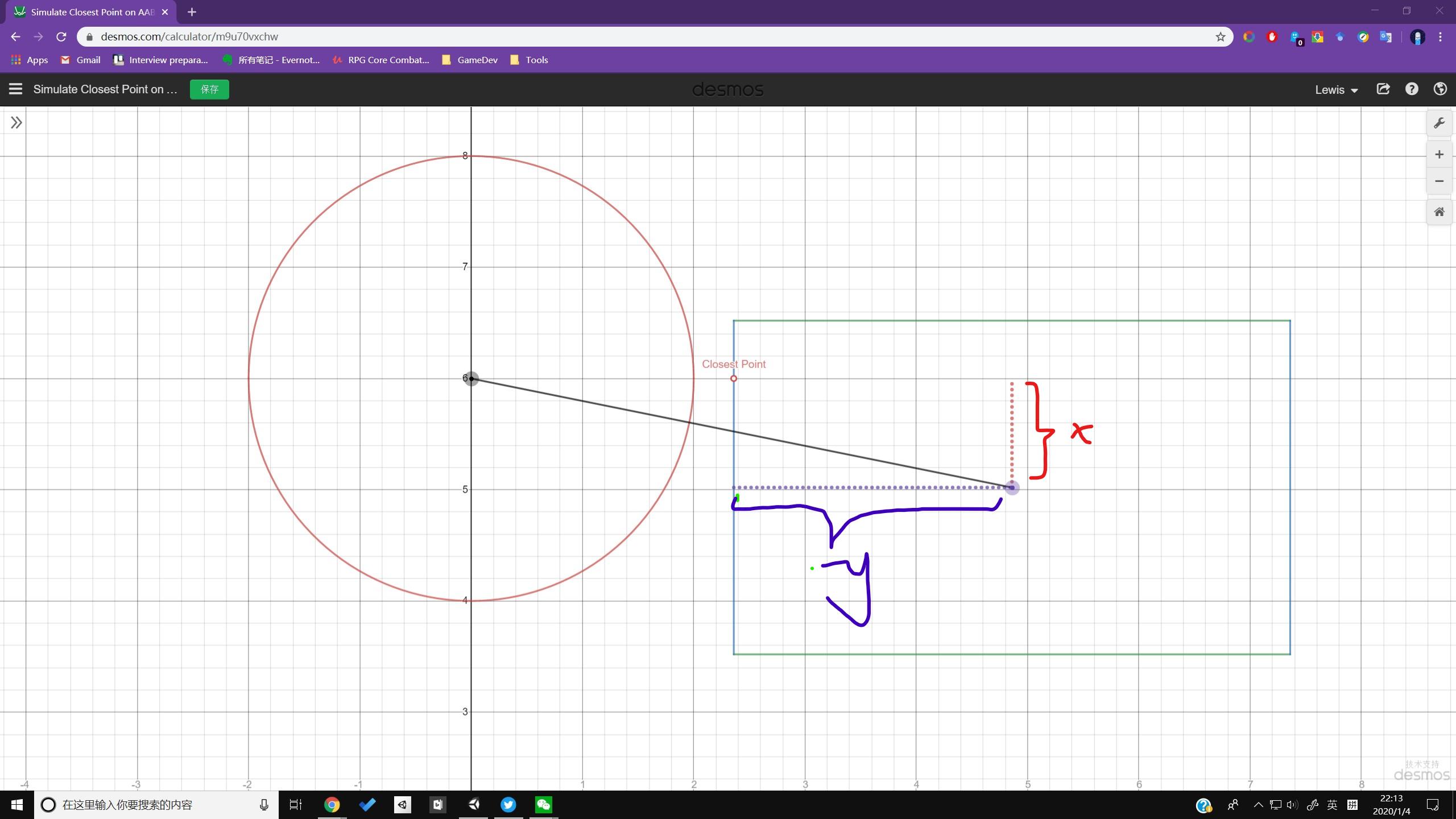 Not the answer you're looking for? Browse other questions tagged 2d collision-detection collision-resolution aabb or ask your own question.