Getting warning after importing plugin to unity5 project

I am getting following warning when I import any plugin to my unity5 project.Whats the solution for this warning? Is there any problem with that which will affect my project. 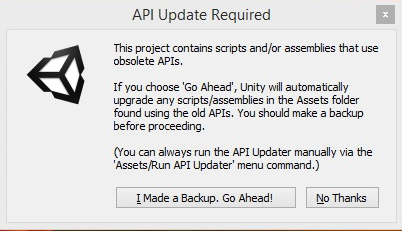 The reason for that warning is because the scripting API has changed slightly in Unity 5. Clearly (and unsurprisingly, since Unity 5 was just released) the code in this plugin was written using commands from Unity 4 that were changed.

When you click "I made a backup, go ahead" the scripts will be automatically updated, replacing all the Unity 4 functions with their equivalent in Unity 5. This update will actually change the code, which is why it says to make a backup first (in case the changes break something in your project).

In the long run, the plugin author should update their code to work in Unity 5, but obviously that is a consideration for them not you.

The solution is having a backup and clicking the button "I made a backup, go ahead".

You are hopefully already under version control (are you?), so backup shouldn't be an issue.

2
Unity Plugin DLLNotFoundException
2
Can Unity4 and Unity5 projects coexist in the same computer?
2
Change all boolean parameters of an Animator in Unity
1
Project transfer, will re-importing all my models damage my project at all?
0
Importing audiofile into Unity3d gets shown after ending playmode
2
Can I run a script and generate warning when Unity project is saved?
0
prefab editor not working for NGUI in unity2018
0
Visual Studio draws red underlines (“squiggles”) on anything in the UnityEngine namespace