Moving an object in a circular path

I want to move one object (dot) in a circular path. How should I change the X and Y coordinates to accomplish this?

You can do that using simple math:

(originX, originY) is the center of your circle. radius is its radius. That's it.

This works because the sine and cosine are mathematically related to the unit circle.

Image credit: LucasVB (Own work) [Public domain], via Wikimedia Commons. (Scaled down to 70%.) 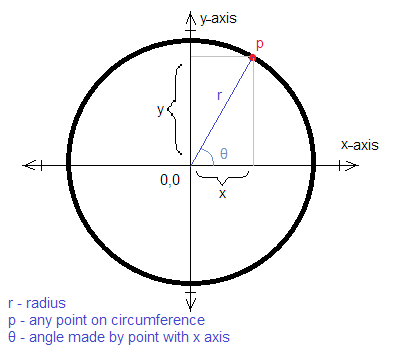 If we take a point "p" on the circumference of the circle, having a radius r.

Using the above assumptions we get the triangle as shown below : 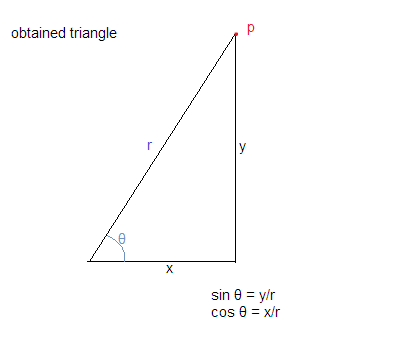 a units in x axis
b units in y axis
So for such a circle we can change the parametric equation accordingly by adding the shift on the x and y axis giving us the following equations :

Where a & b are the x,y co-ordinates of the center of the circle.

There's another trick, where you use the sin(x+a) and cos(x+a) formulas, and that allows you to compute sin(a) and cos(a) -- a being the angle by which you want to move from your current position -- only once and do simply multiplication and additions at each step.

Beware of limited arithmetic precision, though. I've observed in the past "circular" motion implemented that way that would draw a spiral as a result of occasional rounding down repeated over time. It might be necessary to reset position to (x0, y0) after each revolution.

Not the answer you're looking for? Browse other questions tagged mathematics graphics .

3
Moving objects in a circular path, and also moving the whole group
1
How to add zombie arms to enemies in HTML canvas
1
How to rotate a rectangle body around a fixed point?

11
Moving an Object along a Curve while Rotating it
11
How to move an object along a circumference of another object?
1
How can I find the location of OpenGL object after rotation?
1
How can make an object orbit a sphere in a random direction?
3
Moving objects in a circular path, and also moving the whole group
4
Moving a 2D object along circular arc between two points
0
Unable to control speed of the movement - object jumps straight to the end of the curve